See Southern California -- When You Can

When it's possible to travel again, Los Angeles will once again offer its plethora of attractions. What people bent on visiting Disneyland and the beach might miss, however, are some equally worthy out-of-town destinations not all that far away. A city that my husband, Owen, and I visited recently was Santa Barbara, and we took a side trip to visit the Ronald Reagan Presidential Library.

Much to our relief, the morning traffic out of LA flowed without a hitch along the 405 freeway all the way to Highway 101. The excitement increased as we glided down the steep Conejo Grade past Oxnard's strawberry fields, until we reached Ventura, where, like a pop-up postcard, the ocean came into full view once again.

We were headed to the Santa Barbara Botanic Gardens and the gardens' newly opened art gallery. The hilltop location affords sweeping vistas of the city, the ocean and the Channel Islands and provides a delightfully sun-splashed venue for ongoing exhibits. Sinuous paths enticed us through a variety of habitats, from shaded trails bisecting the Canyon Section to gurgling Mission Creek and ruffling banks of emerald green patches of watercress. At the stand of majestic redwoods we stood awestruck under the towering canopy of trees.

A short distance separates the botanic gardens from Mission Santa Barbara, the 10th of the 21 California missions founded by Spanish Franciscan priests in 1786. We had visited this California landmark once before, so we stayed clear of the busloads of tourists in the crowded parking lot. Instead, we headed for the beach.

The pebble beaches of the French Riviera can't hold a candle to the mile-long crescent of white sand that scallops Santa Barbara Bay. A friend had recommended the Shoreline Cafe, a hangout favored by students and faculty from nearby Santa Barbara City College. Seated on the deck rather than sinking our toes in the sand, we listened to the waves as we faced the Channel Islands while sampling a garlicky guacamole and sipping a fish soup. We delved into an explosion of flavors the next morning during breakfast at Via Maestra 42 trattoria at the northern end of State Street.

"It even smells like Italy!" a woman exclaimed as she perused the pantry laden with Italian condiments and the refrigerated case filled with Italian cheeses and flaky homemade pastries. I couldn't resist my favorite, cassata, a Sicilian delicacy that incorporates zabaglione and candied fruit. As for purely breakfast fare I picked a puffy and golden vegetable frittata. By the time we left for Montecito and Casa del Herrero, the line snaked out the door.

Casa del Herrero is, simply put, a hidden architectural gem of the upscale Montecito, a chic Santa Barbara "suburb" where more than 100 homes (including Oprah Winfrey's) were destroyed during the 2018 landslides. Casa del Herrero survived unscathed. The authentic Andalusian-style estate was built as a summer home in the mid-1920s by wealthy St. Louis businessman, George Fox Steedman. He and his wife hired only the best artisans and gardeners to create their dream retreat. Vintage handcrafted Tunisian tiles and carved Spanish antiques give the mansion a distinctly Moorish flair. Parking is extremely limited, and docent-led visits are by reservation only, so make sure to plan ahead.

We had reserved a table for 5 p.m., opening time at Bouchon, a French bistro in the heart of downtown and one of the city's most acclaimed restaurants. A previous meal at Bouchon had left me wanting to sample more items on the menu, and this occasion confirmed my initial memories. The intimate space can get noisy at times, and no wonder: All tables were filled by 7 p.m., with many diners occupying the long wooden bar at the back of the room. Bouchon's delectable French "four onion" soup provided reason enough to rejoice. As did the Maple-Glazed California Duck Breast and Confit of Thigh and its accompanying chorus of fresh fava beans, sweet corn and butternut squash.

We returned home the same way we came, adding a detour to Simi Valley and the Reagan library, one of the most visited in the United States. Mix in a touch of Disneyland with a sprinkling of Hollywood, a generous dose of American history, a graffitied section of the Berlin Wall, a reproduction of the Oval office, the gun that almost killed the president, the Rose Garden and even Air Force One inside its giant hangar, and the library has it all.

From the drive up the hill lined with banners depicting past presidents to verdant views of the California back country, the site is meant to impress. Inside, a gaggle of eager docents, most of them veterans of the Reagan era, ensure that you enjoy the experience. We did — even more than we expected. After listening to a lifelike hologram of the "Gipper" giving a speech, I tested my knowledge of protocol at an electronic table instructing me on how to put on a state dinner for the Saudi king. A scowling Ayatollah Khomeini stared at us from the wall of "bad guys" active during the Reagan presidency. The mood lightened around the presidential lectern where visitors can deliver their own presidential address.

So intent were we on viewing every inch of Air Force One, a surprisingly modest presidential plane by today's standards, that we didn't leave time for visiting the Reagans' gravesites. My apologies, Mr. President. There will be a next time!

Tours at Casa del Herrero are by reservation only on Wednesdays and Saturdays for those 10 years and older. Reservations are a must: www.casadelherrero.com. 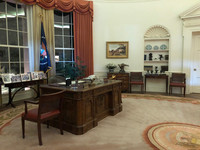 The Oval Office at the Ronald Reagan Presidential Library in Simi Valley, California, looks exactly as the real one did at the White House. Photo courtesy of Kitty Morse. 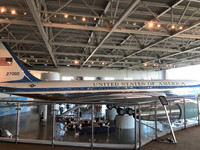 One of the attractions at the Ronald Reagan Presidential Library in Simi Valley, California, is the actual Air Force One that the president used. Photo courtesy of Kitty Morse. 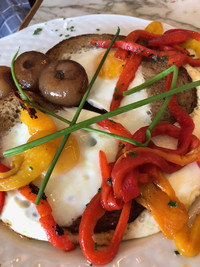 Breakfast is an adventure at Via Maestra 42 in Santa Barbara, California. Photo courtesy of Kitty Morse.

One of the attractions at the Ronald Reagan Presidential Library in Simi Valley, California, is the actual Air Force One that the president used. Photo courtesy of Kitty Morse.