The Mysterious Case of Epsilon Aurigae

Ever since I was a youngster, I've been fascinated by how crime scene investigators can reconstruct a crime with such amazing accuracy from relatively scant evidence. They don't have the luxury of watching the crime occur and often don't even have an eyewitness. Instead, they must work backward from their own later observations and measurements — using tools such as physics, chemistry and biology — to reconstruct logically what must have occurred to produce the evidence as it now appears.

Astronomers are often faced with the same problem. They must determine complex physical mechanisms by observing and measuring only the faintest flickers of starlight coming from many trillions of miles away. The stories carried to our eyes and telescopes by starlight are really quite remarkable.

One such story comes from a relatively obscure star in the constellation Auriga, the charioteer, visible low in the northeastern sky shortly after dark on late autumn and early winter evenings.

Now, I know that beginner stargazers are tempted to search the skies for an outline of a charioteer; that is, after all, the constellation's namesake. But I think you'll find it much easier to trace among its stars a pentagon that emanates from the bright star Capella.

Along Auriga's northwesternmost side, you'll see three relatively faint stars form a tiny triangle. The brightest of these three — also the one closest to Capella — is known to astronomers as Epsilon Aurigae, or Almaaz.

Viewing this star with the eye, binoculars or even a small telescope gives no hint as to how unusual it may be. The flickers of starlight tell us that the star may be 12 thousand trillion miles from Earth — so distant that its light requires some two millennia to reach us — and suggest that its mass is as much as 15 times — and its diameter perhaps 300 times — larger than the sun.

If this isn't amazing enough, astronomers have long known that, since its brightness fades every 27 years or so, it is being regularly eclipsed by something orbiting nearby. Many such "eclipsing binaries" exist around the sky, and their eclipses often take a few hours or days. This one, however, lasts about two years. Whatever is eclipsing this star seems to be significantly larger than Almaaz itself — perhaps a thick, donut-shaped ring of dust as large as the orbit of Saturn around our sun that passes in front of Almaaz from time to time.

During the most recent eclipse of Almaaz in 2009-2011, astronomers compiled more evidence from ground-based and space-borne telescopes to devise some competing theories to explain its faint flickers of starlight.

Of course, no one knows for certain what's happening there, and astronomers will surely be debating the evidence until its next eclipse around 2036.

So, much like a complex crime scene, the investigation continues. 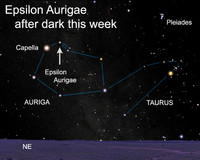 Look for a pentagon that emanates from the bright star Capella.