See Beverly Hills on a Budget

Classic Hermes scarves as brilliant as spring wildflowers — and the essence of Beverly Hills style and elegance — are only one touch of refinement in a city known for its distinctive affluent character. Beverly Hills, a sparkling jewel of 5.7 square miles tucked in amongst the sprawling confines of Los Angeles, projects an aura of exceptional enchantment.

The streets of this villagelike enclave might not be dotted with precious stones, but they do graciously host a large collection of jewels on wheels: Mercedes and Maseratis, Rolls-Royces and flashy, low-slung sport coupes itch to strut their stuff.

Stretch limos carry mystery guests who wear the ubiquitous oversized dark glasses and hope to be noticed as they scamper into the elegant and historic Beverly Wilshire Four Seasons (1927), the spirited Viceroy L'Ermitage, and the Beverly Hills Hotel — affectionately known as the Pink Palace (1907) — all hangouts for the rich and famous and anyone else with a buck or two.

For all the glitz and glamour, visitors can enjoy this fairy-tale city brimming with old-fashioned love and care without breaking the budget or sizzling their plastic. Beverly Hills on a budget is one of Southern California's best-kept secrets and a splendid Southern California travel experience.

The city is compact and extremely walkable, so it's great fun to browse downtown, crisscrossing Rodeo and Canon drives and high-energy Wilshire Boulevard, then stopping by the city's grand hotels and enjoying an adult libation in their lounges while experiencing some of the best people-watching anywhere.

Remarkable among the Beverly Hills "in" sights, where residents all seem to know one another or wish they did, are the famed Polo Lounge in the Beverly Hills Hotel, the Peninsula Hotel after 5 p.m., and afternoon tea served with a black-tie flourish at the Beverly Wilshire. Major film deals have been negotiated there more than once over a cup of steaming Earl Grey and a fresh croissant.

The "BH Drop-in List" should include Wolfgang Puck's Spago restaurant on Canon Drive. Here, at the bar overlooking the main dining area, women with fluttering eyelashes and manicured nails sit alongside ultrasmooth gentlemen beyond the edge of continental fashion, all waiting for or basking in the aura of success. Facades and skin care are important, only their agents know for sure.

A short hop to 9018 Burton Way is II Cielo. Voted the most romantic restaurant in Southern California, Il Cielo uses its cozy European cottage-style ambience to showcase a traditional country cuisine that consistently outshines the fashion statements. II Cielo may be beyond budget but is well worth the treat.

In order to place the city in focus, download the six self-guided walking tours, all with wide-ranging appeal. Walking or not, the city is exceedingly safe. Time allowing, the walking tours will lead you past a whimsical Frank Lloyd Wright building at 322 N. Rodeo Drive, the eclectic Beverly Hills Civic Center, the superb Spanish Renaissance City Hall built in 1932, and the gorgeous Public Library, the latter two adorned with sculpture and art and offering free maps of public art citywide.

Reflected in the city's elegance are more than 100 acres of parklands and greenbelts dotted with fountains and monuments that are easily accessible. A special greenspace included on the walking tour is Beverly Gardens, a 14-block assemblage of trees and flowers along Santa Monica Boulevard, circa 1911. Farther down Santa Monica at Camden Drive is the stately Cactus Garden, a full city block featuring one of the world's largest collections of cacti.

For all the city's refinement and alluring lifestyle, it gets down-home earthy and back to its roots every Sunday from 9 a.m. to 1 p.m. at the impressive farmers' market in the heart of downtown on Civic Center Drive. Before the city's development in 1906, this hallowed ground was covered with lima bean fields. Now small and midsized California Certified Farmers who have packed up their produce and trucked in from Fresno, Central California and the San Diego area, set up some 50 fruit and vegetable stands and dispense their organic delicacies to the masses.

The pomegranate juice man sells out every Sunday, large strawberries are perfect with champagne and very popular, and on the second Sunday of every month pony rides and a petting zoo keep the kids entertained while parents are squeezing the avocadoes. With a sharp eye and a little luck, you might even spot a celebrity hiding behind a gilded trash bin.

For more information: www.lovebeverlyhills.com. This is where you'll find the walking tour guides.

The Beverly Hills Civic Center is among the most attractive in California. Photo courtesy of Halina Kubalski. 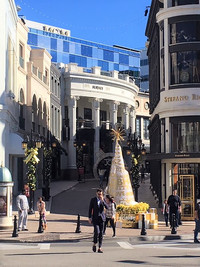 Rodeo Drive in Beverly Hills, California, is noted among the world's top destinations for shoppers, browsers and people-watchers. Photo courtesy of Halina Kubalski.

The Beverly Hills Civic Center is among the most attractive in California. Photo courtesy of Halina Kubalski.