Downtown Phoenix Is Cool and Hip

A few years ago anyone taking a look at downtown Phoenix would see a city badly in need of a makeover. While upscale Scottsdale, just down the road, became a sprawling city/town of upscale gated condos, fine restaurants and boutique shops, Arizona's capital was left by the wayside, sleeping amidst urban neglect.

Although Phoenix's central business district is an esteemed Arizona financial and employment hub, it fits squarely into the pattern of other U.S. big-city downtown areas: Residents and developers fled elsewhere, leaving the metropolitan downtown district to fend for itself.

"In 1998 it was difficult to find a single place open after 8 p.m. in downtown; then 10 years ago things started to move," said Susan Byer, an 11-year resident originally from Orange County, California. "I like to say that we haven't been rejuvenated, we were just sleeping. We're now bicycle-friendly and we've always been outdoor folks who support the arts. It's just that people have to know that the old sleepy downtown is ancient history."

With great determination, the city did move onward and upward. With an eye on Southern California, the movers and shakers in Phoenix observed an astonishing Los Angeles downtown transition. For years, at the conclusion of a Los Angeles workday, office workers hopped in their vehicles and scampered to their homes located in the far reaches of the city, leaving downtown to become a ghost town.

Now Phoenix, with a personality and environment distinct from any in Arizona, is finding its niche with a lively downtown footprint. In late 2008, a 26.3-mile light-rail system began operating, while thousands of residential apartments were constructed among a skyline of 25 or so towering office buildings, a fundamental step in creating a newly livable metropolitan center.

An enormous bonus in the emergence of urban Phoenix is the passion and vitality of the 11,500 Arizona State students who attend classes at the ASU downtown campus, which includes the Cronkite School of Journalism/Law. Many of the students work part time in the restaurants and retail shops with books in hand.

Positioned above the 10th floor of the hotel are 224 exclusive, high-end CityScape residences that extend to the 25th floor with four private elevators. Opened in 2014, they are currently 94 percent occupied. Also linked to the hotel is the classy Blue Hound Kitchen and Cocktails Restaurant. Owned by Kimpton and privately run, Blue Hound offers a dark, romantic room with candlelit tables and a partially open kitchen where Executive Chef Sean Currid has won enough awards to cover the walls of his office. Since the opening in 2012, Currid has used local ingredients whenever possible and heads a tight operation.

Among CityScapes' 20 or so restaurants, the popular Phoenix Public Market Cafe stands out with fresh organic produce from local farmers and great choices for breakfast or lunch. After dining there, step out the backdoor and find the lively outdoor Public Market. In business since 2005, the friendly market sets up on Saturday mornings selling arts and crafts, fresh produce and homemade delights.

Another splendid addition to the new downtown is The Arrogant Butcher, who arrived in the winter of 2011 with forks flying. Steps from the Palomar Hotel on East Jefferson, this high-end restaurant has three private dining rooms, a patio, and a Chef's Counter that wraps around an open kitchen where guests sipping fine tequila observe inspired international and Northern Italian style cuisine being prepared.

When the sun fades to early evening, downtown Phoenix changes to nightlife cool. With lights glowing and red carpets in place, the Copper Blues, Gypsy Bar, Lucky Strike, Stand up Live, The Talking Stick Resort Arena and the Desoto Central Market on Central Avenue are waiting for the party crowd. The earthy Desoto Central Market, opened in 2015 and housed in a 90-year-old brick-walled warehouse-style building, was once a car dealership. Now it's the place to meet residents, salsa and swing dance, and browse an assortment of food booths. All venues are tucked within the CityScape Quarter, and all are within easy walking distance from one another.

Two internationally recognized Phoenix icon destinations, not located in CityScape but both on North Central Avenue, are the Phoenix Art Museum, featuring more than 18,000 works of art, fashion design and ongoing exhibits, and the Heard Museum, an Arizona treasure showcasing the art, culture and history of indigenous peoples of the Americas with an emphasis on the Southwest.

One part of the re-emergence of downtown Phoenix, Arizona, is its light-rail system. Photo courtesy of Halina Kubalski.

The Heard Museum in Phoenix, Arizona, specializes in the history of indigenous peoples with an emphasis on the Southwest. Photo courtesy of Halina Kubalski. 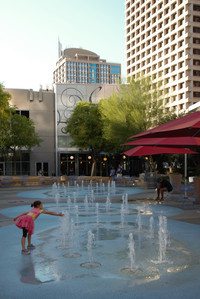 A child plays in the popular CityScape area in Phoenix, Arizona. Photo courtesy of Halina Kubalski.