Kolkata Is a Special Place for Visitors to India

Kolkata, formerly named Calcutta, is a capital of chaos and contradictions. Crowding and humidity are often overwhelming in this northeastern Indian city of 4.5 million. Nevertheless, Kolkata can be a fascinating encounter, particularly for those who have already experienced India's more tourist-focused locales.

Indeed, for anyone who wants to know more about how Britain used this city as a foothold from which they extended control over the balance of India, a short Kolkata visit should prove to be most worthwhile. In addition to exploring Kolkata's historical center, it's also a good idea to venture out to the suburbs, where starkly modern structures house high-tech firms, an appropriate contemporary version of the trade that initially brought Europeans here in the first place.

Starting in the 17th century, merchants from countries including Great Britain, France, Denmark and Portugal came here seeking a huge variety of goods to resell in Europe. Cotton, silk, indigo, dye, salt, saltpeter, tea and opium spurred flotillas that sailed up the Hooghly River roughly 100 miles north of where it empties into the Bay of Bengal.

Though not officially part of their governments, entities such as Britain's East India Company often ended up acting as government surrogates. Receiving a royal charter from Queen Elizabeth in 1600, the East India Company was owned and powered by shareholding merchants and aristocrats. As its influence grew, so did conflicts with local rulers. This peaked in 1756, when the "Black Hole of Calcutta" incident changed everything.

The East India Company had built Fort William on the site now occupied by the General Post Office. Worried the British were taking over his territory, the nawab (ruler) of Bengal attacked and captured the fort on June 20, 1756, and imprisoned more than 100 captured civilians and soldiers. They were stuffed into a far-too-small dungeon, and most died from suffocation or dehydration.

When news of the incident reached Great Britain, public opinion demanded revenge. That came on June 23, 1757, when British troops conquered a French-based coalition, allied with the nawab, at the Battle of Plassey, less than 100 miles from present day Kolkata. This victory essentially ensured Britain's subsequent dominance over the Indian subcontinent.

The company's dominance was maintained until the British crown took over territorial control in 1858. Calcutta then became the new colony's capital, a role it retained until 1911, when the capital was moved to more central Delhi.

For those 53 years a bevy of stately Victorian structures arose. Today a stroll past their exteriors (most cannot be entered due to extensive renovation) is a highlight of any visit. These colonial remnants also underlie a chronic Kolkata-Calcutta concern: rampant corruption that has diverted critical funds for upkeep and repair. This becomes clear via a stroll around Dalhousie Square past the Governor's House, St. John Church (outside of which is a memorial obelisk commemorating "Black Hole" victims), the General Post Office and the massive Writers Building that was the former East India Company headquarters.

Also worth a visit is the stately Victoria Memorial, erected in 1921, and its two museums. Most interesting is the air-conditioned section full of historic photos that offer a great overview of Calcutta history. The gallery next door, home to 18th- and 19th-century historic paintings, is also worthwhile. Other center-city highlights include the mausoleum of Job Charnock, the 17th-century trader who bought the three small villages that became the trading base that became Calcutta.

Individuals or small groups can easily navigate Dalhousie Square and view its Victorian structures, but most other Kolkata sightseeing can be difficult to find and access, and jam-packed public transportation will not please most visitors. Therefore, even the most determined independent travelers would probably be best served by touring the city in the company of a savvy guide.

For example, Chitpur Bazaar, packed with merchants and shoppers, is a must. Porters moving amazing loads on their heads or piled onto bicycles, flotillas of motorized "tuk-tuks" and wagons bearing seemingly impossible loads have to be seen to be believed. No space lacks commerce, and whether it's tea purveyors brewing on a scrap of sidewalk, key-makers crouching by roadsides or money exchangers dealing on staircases, business pulsates on as crowds roar past.

Nearby are several synagogues where visitors are welcome. Though almost all of Calcutta's once-thriving Jewish colony has left — most following partition with Pakistan and the creation of Israel — the well-preserved Maghen David synagogue at Brabourne Road and Canning Street and Beth El synagogue on Pollack Street do remain. The Maghen David — the largest and most beautiful with a huge mosaic of the Ten Commandments and imposing crystal chandeliers — still evokes a fabulous past.

Not far away is College Street, featuring many blocks packed with stalls offering items for sale. While Kolkata's streets may be challenging to navigate, they offer unbeatable subjects for photographers. Many other sites are similarly photogenic, such as the wholesale flower market near Kolkata's iconic cantilever Howrah Bridge and adjacent to the Hooghly River, where devout Hindus pray and immerse themselves in waters they deem holy. A prime Hooghly appeal for them is that the Hooghly is an extension of the revered Ganges River.

A midmorning visit will feature a veritable riot of yellow and orange marigolds being delivered, strung into garlands and shipped out to Kolkata retail outlets. Flowers arrive from the countryside via rail and then are carried or floated across the river to the market. Viewing and photographing riverside immersions and flower market activities are a highlight of many visitors' Kolkata stay.

It is also possible to visit several of the 13 sites operated by Mother Teresa's charities, which are Kolkata-based. Visitors are welcome at some of the centers that house and care for the destitute and homeless. Also accessible are parts of the administrative headquarters, where a fascinating museum details the organizations and founders' histories and operations as well as the room where Mother Teresa lived and worked until her death in 1997.

Also fascinating is a stroll through Kumartulli pottery village. Here workers produce straw and clay oversized images that are at the heart of an unending series of festivals honoring favorite Hindu gods and goddesses. Operational year-around it is most active in the weeks preceding the fall Durga Puja celebration.

Anther intriguing Kolkata stop is the home of Rabindranath Tagore (1861-1941), one of India's most revered writers and winner of the Nobel Prize for Literature in 1913. Highlights include an incredible collection of photographs detailing Tagore's travels and encounters with worldwide leaders and thinkers.

Specializing in Indian travel, Greaves Tours provides superb guides and drivers who have a wealth of experience navigating challenging destinations such as Kolkata: www.greavestours.com.

The Indian Coffee House is a favorite meeting place near College Street for Kolkata's many peoples and cultures: 15 Bankin Chatterjee St.

The Peerless Restaurant offers superb Bengali cuisine and is just a short walk from the Oberoi: www.peerlesshotels.com. 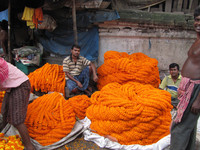 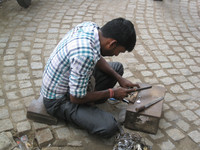 This key-maker's workplace is on a busy street in Kolkata, India. Photo courtesy of Barbara Selwitz.