We drove in search of storybook villages, historic palaces, vineyards and Franconian wine. Wurzburg and Nuremberg, the big cities in Germany's Franconia, a region in the state of Bavaria, are well worth exploring, but don't miss less-visited Volkach and Bayreuth. Volkach put us in the heart of a major winegrowing district and Bayreuth delivered gilded palaces and so much 18th century intrigue, complete with wicked royals and lasting triumphs, that we felt we had somehow landed in a Brothers Grimm tale.

We arrived in Volkach (pronounced Full-Kah), 94 miles from Frankfurt Airport, on a temperate Friday evening. In the Main River village, locals drank wine and beer, chatting outside pubs and restaurants in the 17th-century buildings lining the historic area.

We started our wine-tasting at Weingut Max Muller I. Fourth-generation vintner Christian Muller plies his craft in a 1692 building commissioned by the Wurzburg bishops to house monks whose duties included producing wine. Muller explained that 81 percent of Franconia's wine is white, that the most popular varietal is silvaner and that the wine is traditionally sold in a bocksbeutel, a flattened tear-drop-shaped bottle. According to one legend, the monks found the bocksbeutel's form easy to tuck under their belts for tippling as they toiled. Muller's wine, as well as the tasting room's minimalist decor, proved refreshing.

At the cooperative Winzer Sommerach, our next stop, some 200 small-scale vintners turn their grapes into 80 different wines for sale. The showroom's sleek oak tables and stone walls contrast nicely with the tasting cellar below, a vaultlike space bathed in purple light and lined with old oak barrels where we discovered a nice riesling.

The Vogelsburg abbey, now a restaurant on the site of a former ninth-century monastery, gifted us with a view of hillside vineyards that sloped gently toward a sinuous loop in the Main River. For lunch, we took a chance on the traditional vintner's platter: sausages; gerupfter, mashed cheese; schmaltz, chicken fat; eggs and bread. We raised a glass of silvaner, said "zum Wohl'' (good health) and tried not to think about cholesterol and clogged arteries.

Bayreuth (pronounced bi-ROYT'), 93 miles from Wurzburg, surprised us with its cultural treasures, a legacy of determined Princess Wilhelmine of Prussia, who gained the title "margravine" upon her 1731 marriage to Frederick, Margrave of Brandenburg-Bayreuth. Her back story made her accomplishments even more impressive as well as explained certain lugubrious details in her palaces.

Raised to marry the Prince of Wales and eventually reign as England's queen, Wilhelmine suffered dashed hopes when her father decided that such a marriage would disrupt Europe's balance of power. Von Bayreuth wasn't Wilhelmine's second choice, or any choice at all, until Wilhelmine's brother Frederick, later known as Frederick the Great, ran away from Prussia at 18 with his close friend and likely lover, Hans Hermann von Katte. After soldiers captured and imprisoned the pair, the king, in November 1730, forced his son to watch von Katte's beheading.

Daddy wasn't done yet. According to some histories, the king threatened his son with continued imprisonment unless Wilhelmine married von Bayreuth. Because the siblings were close, Wilhelmine reluctantly wed the low-ranking margrave, moving from cultured Berlin to then provincial Bayreuth.

Wilhelmine devoted herself to raising Bayreuth's profile. She invited artists, writers and musicians to visit and erected grand buildings. Her Neues Schloss (New Palace), begun in 1753, stands as a monument to rococo excess. Tapestries, murals, carved palm trees, a gold ceiling embedded with coral and all manner of gilt stucco work — birds, harpsichords, wreaths — adorn the rooms. Amid the finery, our guide pointed out the portraits of female martyrs and the shattered glass fragments Wilhelmine had pasted to the ceilings as testaments to her personal heartbreak.

The Opera House Wilhelmine built for the 1748 wedding of her daughter reopened in April 2018 after nearly $40 million in restorations. The structure, a UNESCO World Heritage Site, is one of the best-preserved Baroque theaters in Europe. Entering the auditorium felt like stepping into a life-sized jewel box. Embellishment is everywhere. The pillars look like marble, a result of the theater's repeated trompe l'oeil patterning. Gold garlands edge the loges, carved cherubs trail gold vines and angels in flowing gold robes frame the Prussian coat of arms. Designed to impress, the Opera House dazzles with Baroque excess.

More than a century later, the Opera House drew Richard Wagner to Bayreuth. Inspired, the composer constructed his Festspielhaus, staging his "Ring of Nibelung" there in 1876. Bayreuth continues the tradition with its popular summer presentations of Wagner's "Ring Cycle." (Tickets can take years to get).

Before leaving Bayreuth, we toured its synagogue, whose roots date to 1760, making it the oldest synagogue operating in Germany. The building survives because Nazi sympathizers refused to burn it since a fire would have destroyed Wilhelmine's Opera House next door.

Afterward, we walked to a nearby cafe, ordered a glass of Franconia's best and toasted to picturesque villages, perseverance and the good things that endure.

For help planning a trip to Franconia: www.frankentourismus.de and

Weingut Max Muller I: www.max-mueller.de (Note: This spelling is correct, even though the winery uses a different spelling.)

We stayed at Hotel Vier Jahreszeiten, Volkach, which dates to 1605. Rooms in the eclectically furnished hotel come with a big breakfast. Prices start at $185: www.hotel-vierjahreszeiten-volkach.de.

Christian Muller, vintner of Max Muller I winery in Volkach, Germany, samples a glass of his wine. 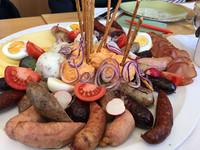 Christian Muller, vintner of Max Muller I winery in Volkach, Germany, samples a glass of his wine. Photo courtesy of Candyce H. Stapen.