People Make the Place in Jamaica

One meal my wife, Fyllis, and I will long remember was a gourmet five-course candlelit dinner served in a romantic setting. Another was a simple vegetarian lunch at a ramshackle lean-to perched precariously on a steep mountainside.

It's not often that two repasts encapsulate much that a destination has to offer visitors, but Jamaica is such a place. The Chef's Showcase dinner dished up at the Sunset at the Palms Resort had little in common with the modest spread prepared by Fire, a Rastafarian man of uncertain age.

This is just one example of the diversity that greets travelers to Jamaica. The island nation has an abundance of magnificent beaches, a long list of outdoor activities, an intriguing history and a rich cultural melange.

Even tourist-magnet towns along the northern coastline demonstrate Jamaica's split personality. Montego Bay is all hustle and bustle. Ocho Rios is more relaxed, except when the cruise ships disgorge their passengers. Negril overlooks the island's finest beach. Port Antonio offers outdoor markets, a maze of narrow backstreets and buildings whose dilapidated condition can't hide the beauty of their Georgian architecture.

For visitors seeking excitement, activities range from exploring the island by horseback or Jeep and hiking and biking excursions to climbing up mountains and scampering down into limestone caves. Those who prefer to commune with Mother Nature find plenty of alternatives. As if the island weren't already a tropical paradise, British colonists gilded the lily — literally — by importing flowers and fruits from around the world.

The Brits were preceded by Taino Indians, who arrived around 650, and Christopher Columbus, who dropped by in 1494. Spain controlled the island until 1655, when British forces took over. Jamaica became independent in 1962.

The Spanish introduced sugar cultivation and slavery, both of which were expanded by British settlers. Among reminders of the heyday of sugar from the 17th to 19th centuries are the "Great Houses" that plantation owners built. They range from grandiose to more modest, and today they provide insight into part of Jamaica's past.

Halse Hall was built in 1680 on the foundation of a Spanish hacienda. It was constructed with the thick walls of a fortress for security. Rose Hall comes with a legend concerning Annie Palmer, who, according to the story, murdered three husbands, among others. Some people believe that Annie's spirit haunts the grounds.

While Seville isn't one of the more imposing plantation houses, what's inside makes the structure, well, great. A museum traces Jamaica's history and displays artifacts from the times of the Taino, Spanish and British. Scattered around the grounds are portions of the sugar-cane processing factory, the bookkeeper's and overseer's houses, and tiny huts where slaves lived.

Jungled mountains cover about 80 percent of Jamaica's terrain, which is

laced with rushing rivers and tumbling waterfalls. Most famous is Dunn's River Falls, which plummets 600 feet down a series of natural steps that people may climb — carefully and clutching the hands of other daring risk-takers.

A different water experience is a river trip through the verdant countryside. As Captain Gayle expertly piloted the bamboo raft transporting Fyllis and me along the Martha Brae River, he identified trees and flowers and described rusting equipment along the shore left over from sugar-growing days.

Time spent with Gayle was one of several encounters with Jamaicans that became a highlight of our visit. We also purchased snacks from street vendors who were happy to chat for a while with Americans. At a beach that's popular with locals we spoke with families who were picnicking and teenage boys playing a pickup soccer game with coconuts marking the goals.

Our most memorable person-to-person meeting occurred when we approached several men seated on rickety chairs near a small beach. Reggae music blared from a radio, as it does throughout Jamaica from cars, houses, stores — and just about everywhere else.

The men led us along the sand, explaining that the small weathered boats basking in the sun are used by fishermen. Our conversation ranged from the lifestyle of Jamaicans and the island's economy to politics both there and in the United States.

A man named Joshua led us into the minuscule but neatly organized shed which serves as his home. He said he has everything he needs to lead a happy life, and he displayed the joy of simple pleasures that was exhibited by virtually everyone with whom we crossed paths. That outlook, combined with Jamaica's magnificent setting and numerous attractions, has earned it a place on our "must return" list of destinations. 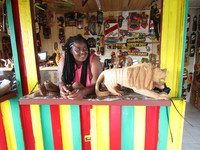 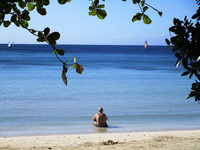 The beaches in Jamaica are just one of its attractions. Photo courtesy of Victor Block.