This is the time of year when ghost fans book rooms 3327 and 3519 at the historic Hotel del Coronado near downtown San Diego, hoping to get more than they paid for — like flickering lights, swaying curtains, cool blowing air and mysterious voices. The two haunted rooms are the most popularly booked, especially around Halloween.

Supposedly the restless spirit of Kate Morgan has roamed around the Del for more than 100 years. Guests lucky (or unlucky) enough to stay in room 3327 have reported a feeling of being watched, the TV switching on and off, pipes rattling, and water faucets turning on and off at random. Kate's face has even appeared to some on the black TV screen.

Both staff and guests have reported seeing a beautiful brunette wearing black 1800s garb gliding down the corridors, entering a room or standing by a window as if she is waiting for someone.

That someone is her estranged husband, card shark Tom Morgan. In November 1892 the two were traveling through the Western states by train. After an argument, when the train stopped in Los Angeles, Tom disembarked, promising to meet Kate later at the Hotel Del. Kate, then 24, mysteriously checked in on Nov. 24 under the name Lottie Bernard. She was assigned to room 302 (later numbered 3312, now 3327) at $15 a week.

The last time Kate was seen was on the evening of Nov. 28 as she stood on a veranda overlooking the ocean. The next morning her body was found on steps leading to the sea, a bullet in her head, a gun in her hand. Was it a suicide? Or was she murdered? Who was this mysterious woman? Was she really Kate Morgan or someone else? Possibly a woman named Lizzie Wyllie?

In fact, through the years several ghost-busters and parapsychologists have stayed in each haunted room for a 24-hour period with infrared cameras monitoring magnetic fields, temperature and humidity fluctuations, and electronic emissions.

Feeling rather brave, I also decided to stay in each haunted room — by myself. My friends thought I was crazy. I was hoping to have some excitement but not enough to scare me to death.

I first booked room 3327, which is on the third floor overlooking Orange Avenue, and invited four friends to join me in the room for a haunted happy hour. One by one they declined, each admitting they had no interest in going near the storied room. Several friends later called to see how I was doing and commented about the static on the phone line — as if someone were listening in, one said.

Reportedly a writer who had stayed in the room before I did carefully laid out a valuable necklace in the safe-deposit box in the closet. She then took a three-hour nap, and when she awoke and opened the box, the necklace was tied in a knot.

When I returned to the room after dinner, the key card wouldn't work. I got a new one, then had to try it at least a dozen times before the door finally opened.

"Kate likes to have fun. She does her own PR!" one hotel staffer chuckled.

I stayed up late watching television, then closed the drapes. At once the lamp near the windows started flickering. Did it need a new bulb? Or was Kate teasing me?

It will come as no surprise that I wasn't able to sleep much, so I just watched the numbers on the bedside digital clock roll over as the hours passed. From somewhere I could hear a faint rhythmic murmur, like the sound of someone snoring or slurping through a straw.

"Maybe it was a death rattle," one of my friends suggested later as I relayed my experience.

Feeling like a haunted-room veteran, a week later I checked into room 3519 on the fifth floor, a much smaller room than 3327. It had been the room of the maid who had assisted Kate during her stay. Reportedly after Kate's funeral the maid was never seen again.

It was in this room that a Secret Service agent reportedly stayed in 1983 and was so spooked he asked for a room change in the middle of the night. A decade later a TV film crew sat silently on the bed and on the floor with several ghost-busters. At 3 a.m. something picked up a water glass in the empty bathroom and smashed it onto the floor.

I'm grateful that nothing like that happened when I was staying there. At 3 in the morning I would have been caught wearing my comfy gown with my face smeared with green gunk running scared-out-of-my-wits into the hallway, I'm sure I would have frightened a few folks and maybe become the next legend of the Del.

The only thing that happened was that by now I had convinced two friends to join me for happy hour in the lobby. I headed down early and sipped a drink while I waited. When they finally appeared they were white as ghosts, asking me how long I had been sitting there. About a half hour, I told them.

They swore that as they approached room 3519 they heard voices talking, mine in particular.

"Oh, good, Sharon's here so she can show us the room," they commented to each other.

Then they knocked, and the voices inside suddenly stopped. My friends knocked some more, calling my name. No response.

As a ghost-buster/parapsychologist told me later, "We classified room 3519 a classic haunting."

Every Victorian hotel should have a ghost, and the Del, which opened in 1888 and is celebrating its 125th anniversary, is no exception. For more than a century Kate — and her mysterious maid — have seen to that. 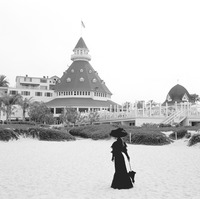 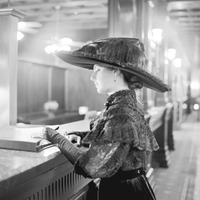 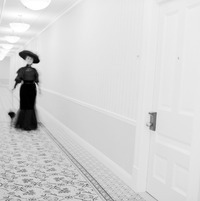