Cambria Is a Sparkling Gem on California's Coast

Below the radar but on the beaten path, Cambria on the Golden State's central coast is not a beach town but a jewel of a seaside village established in 1866. It's no wonder my friend was set on celebrating her birthday here, one of her favorite places on the planet.

Off Highway 1 between Los Angeles and San Francisco, a rugged beach, wildflowers, dramatic Monterey Pines (one of three native forests in the world) and Moonstone Beach are Cambria's backyard. It's said that semiprecious moonstones can be found here. The Greeks connected moonstones to the lunar gods, and the Romans believed they were formed by solidified moon rays.

In the middle of July and with no summer crowds, this was the antidote our small group of city slickers needed to recharge and revel. Each morning breakfast baskets hung outside our guest-room doors. With our first meal of the day in hand, we grabbed a cup of coffee and cozied up on Adirondack chairs overlooking the sea, then crossed the street for a lazy wake-up stroll on the long boardwalk on the bluffs above the beach — serene pleasures we just don't get every day.

The temptation to chill all day was irresistible, but we welcomed a loosely structured itinerary that acquainted us with the magic of Cambria. Our two-car caravan headed 10 minutes north on Highway 1 to Piedras Blancas Elephant Seal Rookery, the world's most accessible location for bird's-eye viewing of the beautiful mammals that migrate here twice a year — December to March for birthing and breeding and April to July to molt and grow new fur. After summer, the "teenagers" come ashore to frolic and play. There's no admission fee to see the seals in this rare natural setting.

Docent Bill Kneeland greeted us on the viewing path and enlightened us on the Southern Elephant Seals.

"There are about a dozen rookeries off the West Coast, including Baja California," he said, "but they're island-based."

The giant seals take turns molting, Kneeland said as he pointed to the all-male group below — most lined up along the sand while others practiced their manliness in the water, chest-bumping each other and barking out challenge calls. They got their name because the male bulls have large noses, like elephant trunks. Adult males reach 14 feet to 16 feet in length while females are 9 feet to 12 feet long.

This mesmerizing spectacle held us captive until lunchtime. From the rookery we continued on Highway 1 to nearby Sebastian's General Store to sink our teeth into its famous "chic burgers." We not only satisfied our taste buds, but we also learned about the general store's fascinating history.

Located on San Simeon Bay across from the entrance to Hearst Castle, Sebastian's General Store was the hub of commerce during the mid-19th century, providing goods for fishermen, whalers, miners and farmers. Old San Simeon Village was home to two first-class hotels and was a depot for stage travel to Cambria. The warehouse at San Simeon Pier stored European furnishings and art during the construction of publishing magnate William Randolph Hearst's castle atop San Simeon.

Purchased by the Sebastian brothers in 1919, the general store still welcomes travelers. Lunching in the rustic outdoors was a delightful repose, and the old warehouse and post office whisked my imagination to a bygone time. Inside, the Hearst Ranch Winery tasting room offers samplings from the Paso Robles Appellation.

Another unexpected find was "Harmony, Population 18," a town the size of a city block five minutes' drive south of Cambria that we would have missed if we blinked. Harmony was first settled by Swiss-Italian dairy farmers in the late 19th century. Using Old World methods, they made high-quality cheeses and butter that earned statewide acclaim. Regular customers here included Mr. Hearst and his Hollywood guests, who bought dairy products on their way to Hearst Ranch.

The town's unusual name was the result of a truce made in the late 1800s by the local citizenry to live together in peace after a killing occurred between feuding farmers. Following decades of abandonment, a revival of the little town began in 1972, putting Harmony back on the map.

We spotted the Harmony Valley Creamery ice cream truck parked in a lot and straightaway ordered scoops for everyone, then strolled around the refurbished creamery grounds to gardens, Harmony Pottery Shop, Harmony Glass Works (a gift shop, glassmaking school and gallery) and the sweetest wedding chapel I've ever seen.

By day we immersed our senses in the peaceful outdoors while learning about Cambria's extraordinary history. At dinnertime we celebrated and savored the best flavors in town at a different restaurant each night.

My only regret was not having enough time to take in a backcountrylike experience at Fiscalini Ranch Preserve — without leaving Cambria. On a 400-foot bluff above the sea, the 430-acre preserve is a biologically diverse habitat for migrating wildlife. The Monterey Pine forest provides protective coverage for birds and animals from monarch butterflies, turtles, frogs, owls, hawks and herons to deer, bobcats, coyotes and more. There's no cost to roam the preserve that's open every day and closes at dusk each night.

We had come to Cambria to celebrate our friend's birthday. But truly, I think Cambria was her gift to us.

We stayed at the Sea Otter Inn: www.seaotterinn.com 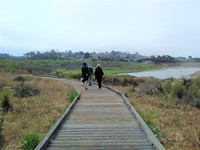 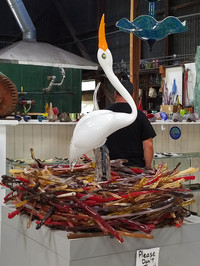