Memories of a Cruise Through the Panama Canal

I just sailed past Cuba on the largest ship I've ever traveled on, the Island Princess. I saw a lighthouse and portions of the Cuban coastline, and then we were in open water again, a stretch called the Old Bahama Channel, which separates the Great Bahama Bank and the Bahama Islands from Cuba. It was once a popular Spanish colonial trade route.

My husband and I left Fort Lauderdale, Florida, yesterday and are headed for the Panama Canal, which we will reach in a couple of days after stops at the island of Aruba, West Indies, and the old Spanish colonial city, Cartagena, Colombia. After passage through the canal, the ship will make port in Puntarenas, Costa Rica; San Juan del Sur in Nicaragua; and Cabo San Lucas in Mexico before reaching our final destination in Los Angeles. It is a 15-day, 16-night cruise. Mainly we are interested in seeing the canal and the new third channel being built by the Panamanians for ships even larger than the one we are on.

Our mini-suite of 302 square feet features a queen-size bed with nightstands on each side, a desk with a chair, two flat-screen TV sets, couch with matching upholstered chair, small cocktail table and refrigerator. The bath has a shower over a tub and the other usual amenities. The decor is yellow with wood trim accompanied by a couple of nice landscape pictures and a large map of the south of France. The Island Princess is registered in Bermuda and travels through the Panama Canal, but the ship's navigational chart on the 14th deck says this ship was built in France by Chantiers De L' Atlantique and delivered June 18, 2003. The cost was $369 million. It has a gross tonnage of 91,627 tons and is 964.6 feet long — or roughly just over 3.5 football fields. The maximum number of passengers it can carry is 1,970, while the maximum crew allowed is 900. Best of all for us is that we have a private balcony with two chairs, footstools and a small table.

We spent today at sea, so we slept in, ordered breakfast in the room and visited the library for some new reading materials, then toured the ship. I was amazed to find three swimming pools on the Lido Deck, including one called "Lotus" that was done in an Asian theme, and a private one called "The Sanctuary," which is only for people who pay to join. "We don't allow kids in this pool," an attendant told me.

The ship also has a large casino and an amazing number of bars and lounges. The decor ranges from pretty glitzy to what might pass for an English men's club.

It is now Day Five, and we are in Cartagena de Indias, Colombia, South America. This old Spanish colony, founded in 1543, is a city of 1.5 million people. It has a history of being attacked many times in the 16th century, so visitors today will find a huge fort and heavy stone city walls constructed over the centuries for protection.

The Castillo de San Felipe de Barajas Fortress was featured in one of my favorite films, "Romancing the Stone," so it was fun to see. Besides the fort, we walked around the Old City, a UNESCO World Heritage Site, saw a folkloric show at the Naval Museum, a cathedral, an old church and the Inquisition Palace, a grim place with devices of torture on display.

On Day Six I woke around 7 a.m. and found our ship was approaching the Panama Canal from the Caribbean Sea, or the Atlantic Ocean side. From our balcony I saw many ships floating around and waiting for their turns to cross the Isthmus of Panama.

After the French tried and failed to build the canal, the United States took over and completed it on Aug. 15, 1914. The length is 50 miles and the width, 920 feet to 1,200 feet. The United States managed its workings until Dec. 31, 1999, when Panama took over full operation.

Now the Panama Canal Expansion Program has been initiated with the goal of doubling the waterway's capacity. Both the Pacific and Atlantic canal entrances are being deepened, as is the Gatun Lake Navigational Channel. Other projects include the building of new locks and water-reutilization basins, the raising of Gatun Lake's maximum operational level and the Culebra Cut. Finally there will be a new Pacific Access Channel. This third lane of traffic will allow the passage of larger ships.

This ambitious new project by the Panamanians broke ground Sept. 3, 2007, but according to our on-board lecturer, Bill Keene, the project is running 8 percent over budget and is 10 months behind schedule. Still, with the help of international financing, the new locks will eventually be built. The ship we are on is the largest size that can go through now, and the cost of passage of the Island Princess is $482,764, according to Keene.

During our daylong passage we saw endless new construction as well as heavy maintenance. With the frequent rains Panama experiences, the hillsides along the canal are constantly eroding and need shoring up, and the canal itself must be continually dredged.

Now that we have been through the canal, the cruise has reached its peak. We had already visited the next three ports in years past, so our plan is to just do walks around the areas where we are docked.

What I have especially liked about the Island Princess has been the friendliness and that it always seems to be filled with music. Besides the shows and lounge presentations, we have thoroughly enjoyed the Rhapsody Trio that performs on piano, violin and bass every night in the atrium. The food has been excellent, especially the Italian dinners at Sabatini's.

We have also ordered several breakfasts sent to our room, and the service has been prompt. The staff all over the ship is especially helpful. Last night a waiter told us that there are 44 nationalities represented by the staff on board, a real floating United Nations, which, I believe, is reflected in their positive attitude toward the passengers.

My husband responded to an Internet promotion for our cruise. We contacted our travel agents, Morrison Travel Consulting at 503-335-8788, www.morrtravel.com, and they put us in touch with Sandi and Paul Halem of Cruise Adventures Travel Co. in San Marcos, California (760-743-7447, www.cruiseadventurestravel.com). 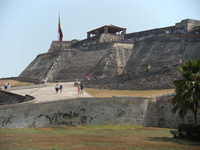 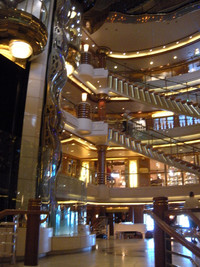