Forty pairs of eyes scanned the countryside, looking for movement, any movement. With binoculars and cameras at the ready, we hoped for a bear or a moose but were willing to settle for some Dall sheep high up the mountain. Not a passenger aboard the bus maintained a semblance of composure. We scurried like children from one side to the other, eager to be the first to announce the next sighting.

Such was my introduction to the Tundra Wilderness Tour, a seven- to eight-hour excursion into Denali National Park and Preserve, one of the highlights of my Gray Line Adventure Tour through interior Alaska. Denali National Park is larger than the state of Massachusetts and tenderly watched over by Denali — "the high one" — at more than 20,000 feet the highest mountain in North America.

On an African safari the goal is to spot the Big Five — lion, leopard, rhino, elephant, Cape buffalo. In Alaska the concept is the same — just the names are different: moose, bear, wolf, caribou and Dall sheep. But when we initially stopped to see a rabbit — which our guide called a snowshoe hare — I thought, "This is not a good sign."

You can't always accurately decipher what you see in the distance: Snow fills are mistaken for sheep, large boulders for bears. Hopes rise and are dashed, and the guide takes refuge in another snowshoe hare. But this was a tour for the long haul, and we were not likely to be disappointed.

Our enthusiastic driver-guide, John Miller, kept up a constant patter that covered vegetation, history, animal lore, Alaska peccadilloes, personal experiences and other tantalizing tidbits for almost seven hours. The fact that it was still interesting by that seventh hour was a phenomenal accomplishment. The running commentary that accompanied Miller's driving along narrow, winding roads clutching the mountainside while he rapidly gazed right and left for any movement that might indicate animal activity was a heroic act of multitasking I didn't want to think too much about.

And there was always something to see. Over the course of the tour we saw numerous Dall sheep, occasional moose, caribou (the North American relative to the reindeer), the ubiquitous snowshoe hares and other native wildlife. And when the animals played hard to get for a period of time, just lifting our eyes to the proverbial snow-capped mountains in the distance was enough to keep us enthralled until the next native creature revealed itself.

Because the bus was so big, the sound of recognition traveled like a wave from front to back — and there was always the risk that the animal the front had viewed was gone by the time the back of the bus caught up. On the off-chance we missed the mama moose and her calf or the Dall sheep straddling a steep slope it magically appeared on the TV screens lowered above the seats, where close-up images from the driver's video camera were reflected. I was torn between resenting seeing my "in the wild" Alaska wildlife resembling a TV documentary and feeling grateful I could see them at all — and close-up at that.

In truth, I was in it for the bears. Earlier in the trip, I had discovered that we were there too early in the year (June instead of July) for the peak running season of the sockeye salmon and, therefore, too early for the bears to gather around the streams just waiting for those happily spawning salmon to fly into their mouths. My own mouth had been watering at the very thought of watching such a spectacle.

John kept reassuring us we would certainly see grizzlies, but by hour No. 6, when only a glimpse of brown had been seen once in the far distance, he finally, guiltily, sorrowfully, very apologetically acknowledged that maybe we wouldn't this trip.

Then suddenl, the cry went out. Waves of "wows" traveled along the bus as a mama and two bear cubs came into view.

Miller admitted he was getting quite nervous — only 20 times in 18 seasons had he failed to see a bear. It was far away and it clearly wasn't catching any fish, but I did feel some sense of vindication.

At the end of the trip he played back the video that captured the highlights of our bus trip from hare to bear and all the other denizens of Denali in between: the many Dall sheep, mama moose with twins, caribou, golden eagle, ground squirrels and ptarmigans (the state bird). We just missed Alaska's Big Five by one wolf. Not surprisingly, the tour ended at the gift shop, where the video was for sale.

Denali was only one stop on the Gray Line escorted Alaska Explorer Tour. It also included glaciers, mountains, gold-mining history, native cultures, whale-watching tours, frontier towns and backcountry plus myriad experiences I've had nowhere else. In the process I learned to appreciate not only America's Last Frontier but also the hardy, independent-minded people who inhabit it.

Still, next time I hope to see more bears.

A moose is one of the frequently seen animals in Alaska's Denali National Park and Preserve. Photo courtesy of Dreamstime. 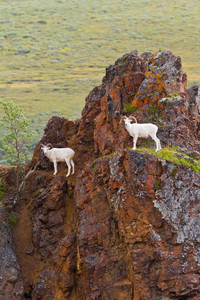 July, when salmon are running, is the best month to see bears in Alaska's Denali National Park and Preserve. Photo courtesy of Peter Kronenmann.

A moose is one of the frequently seen animals in Alaska's Denali National Park and Preserve. Photo courtesy of Dreamstime.