Two eaglets warmed themselves at the base of a sand dune, a pelican dived into the Atlantic Ocean and plovers hopped along the shore. The critters and I shared tranquil beaches in Virginia's Back Bay National Wildlife Refuge and adjacent False Cape State Park, where even in high season seagulls and sandpipers far outnumber sunbathers. The relative solitude rejuvenated me for the second part of my day — cruising the boardwalk (actually a wide paved path) followed by an indulgent seafood dinner.

Virginia Beach, with its 38 miles of coastline, offers a rare combination of secluded shores and a bustling beach town. My goal was to explore both in the same day. I arrived early in the morning to Back Bay National Wildlife Refuge, about 17 miles south of Virginia Beach's boardwalk. The refuge's 9,000 acres offer a haven for birds — more than 200 species have been cited — as well as for work-weary urbanites. In spring and summer, egrets and herons dance along the refuge's marshes. During the fall and winter migration the skies fill with thousands of ducks and Canada geese. Their throaty honks reverberate through the sanctuary.

Even though some of Back Bay's eight miles of trails cut through the inland woods and lead to lookout platforms over marshes, I stayed on the dune-bordered beach. I felt lucky to be on a pristine shore, much like the one that greeted the first settlers. And I needed to get back to board the tram to False Cape State Park.

A hidden gem, the state park, a 4,000-acre, mile-wide barrier spit of land between the Chesapeake's Back Bay and the Atlantic Ocean, receives fewer visitors than the refuge. The park can be accessed only by boaters or hikers and bikers willing to trek the five miles through the refuge to the park and back again if they're not camping overnight. At designated times a tram carries a score or so of nature enthusiasts on a round trip through Back Bay to False Cape.

I boarded the tram. We spotted deer darting through thickets of loblolly pines and sweet gums on the hourlong ride along an interior trail. I disembarked at Barbour Hill for two hours of soul-satisfying beach. Brown pelicans skimmed the surf as the sunlight caught in the curl of a wave. I picnicked on a sandwich I had packed in since False Cape has no eateries.

I craved more time at False Cape. I wanted to search the tree canopy for eagles' nests, explore the marshes thick with cattails and green reeds, and join a guided kayak outing on the bay. All of that required staying overnight. I knew I wasn't a candidate for primitive camping, the only option at False Cape. I wasn't yet willing to forgo a hotel and hot water.

Instead, I opted for a hotel, where I indulged in an afternoon nap before heading out to people-watch and stroll the three-mile promenade. I waved to King Neptune, the area's iconic 34-foot-high bronze statue, and admired the whimsical sculptures of crabs, turtles and other sea creatures that edged the path. I watched surfers and kayakers tackle the waves. I poked through selections of T-shirts and picked up some caramel popcorn on Atlantic Avenue, a main street one block away from the ocean.

In season, Virginia Beach typically hosts nightly entertainment. Mimes, magicians, and guitarists entertain and crowds gather at seaside band shells for free concerts. Over tasty crab cakes at Catch 31, I wondered whether I could bike into False Cape, toting in my camping gear and eating protein bars. The rewards, I knew, were worth the work.

I stayed at the Hilton Virginia Beach Oceanfront for its rooftop pool, panoramic water views, restaurant and central location: www.hilton.com/en/hotels/orfbogi-hilton-garden-inn-virginia-beach-oceanfront 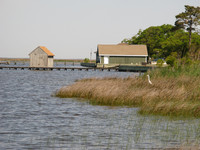 A heron is poised in the reeds at False Cape State Park in Virginia. Photo courtesy of Candyce H. Stapen. 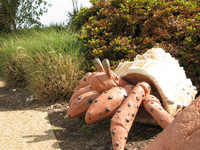 A sculpture of a hermit crab greets visitors to the Virginia Beach boardwalk area. . Photo courtesy of Candyce H. Stapen.

A heron is poised in the reeds at False Cape State Park in Virginia. Photo courtesy of Candyce H. Stapen.