The morning of Jan. 24, 1848, started out pretty much the same way all of James Marshall's days had since he partnered up with a savvy Sacramento businessman named John Sutter. Marshall's task was to oversee the construction of a sawmill in the Sierra Nevada foothill town of Coloma on the shore of the American River. On this particular day Marshall was up to his knees in water inspecting a freshly dug ditch that would channel water to the big wheel that drove the mill.

Then something happened that changed history.

"I picked up one or two pieces and examined them attentively," Marshall would later recall. "And having some general knowledge of minerals, I could not call to mind more than two which in any way resembled this, iron, very bright and brittle; and gold, bright, yet malleable. I then tried it between two rocks and found that it could be beaten into a different shape but not broken. I then collected four or five pieces."

So began the California gold rush.

Today in Amador and Calaveras counties the gold rush is in tourism. Every year (like those adventurous Argonauts of '49) visitors come to explore the 150 miles of state route 49 and its picturesque side roads. What they find is a mother lode of California history, vineyards producing some of the best wines in the state and a park where they can wander among thousand-year-old giant sequoias.

A perfect place to start is Placerville (formerly Hangtown) at the intersection of Interstate 50 and state route 49. After exploring the streets of the town it's only a few miles to the Marshall Gold Discovery State Park in Coloma, where it all started. With its preserved gold-rush-era buildings, authentic mining machinery and the re-created mill, the park also offers living history demonstrations.

Even nearer to Placerville is the Gold Bug Park and Mine, where you can don a hard hat and get a real taste of what life was like for the men who moiled for gold. Your tour will be led by a genuine Argonaut, and if you can get a tour of the Priest Mine (also part of the park) you'll see the thousands of pick marks left by Welsh miners who were brought in to work. The kids can also pan for gold.

Jackson (and its nearby Kennedy Mine) is another primary destination. Plan to stay the night at the town's newly restored 1862 National Hotel. But if it's the combination of history and literature you seek, there's no better town to find the spirit of Mark Twain than Angels Camp, home of the author's "The Celebrated Jumping Frog of Calaveras County."

The gold country also offers myriad short side trips on some of California's most scenic back roads. Stay the night in Mokelumne Hill or Volcano and you may find a sign in your room stating boldly, "Joaquin Murrieta (the notorious outlaw) slept here!" You might also hear about the most notorious lady of the goldfields — Lola Montez, who toured the camps in the 1850s performing her signature "Spider Dance." A wonderful family attraction because of its vast array of mining equipment, authentic wagons and stagecoach is the Columbia State Historic Park located between the towns of Sonora and Columbia.

It is also possible to explore California Native American history by visiting Indian Grinding Rock State Historic Park, where outcroppings of marbleized limestone contain some 1,185 mortar holes — the largest collection of bedrock seed-grinding mortars in North America. The guides are all members of local tribes.

If you really want to go back in time in an atmosphere were humankind is dwarfed by the splendors of nature, travel north from Angels Camp on state route 4. It will lead you to the Calaveras Big Trees State Park. Among towering giant sequoias you will find the most famous tree stump in California, the Discovery Tree, which took five men 22 days to cut down. Dances were held on it the 1880s and the giant stump is featured prominently in John Adams' new opera, "Girls of the Golden West."

If wine is an essential part of your travel experience, the picturesque town of Murphys offers tasting room after tasting room. But to really get the feel of gold country vineyards there is no more beautiful place than the Shenandoah Valley near the town of Plymouth, a quaint little town where one of the region's finest restaurants is Taste and the best boutique hotel is Rest.

There's a lot to see and do in California's gold country. You're like to find yourself shouting, "Eureka, I've found it!"

Gold Bug Park and Mine: www.goldbugpark.org 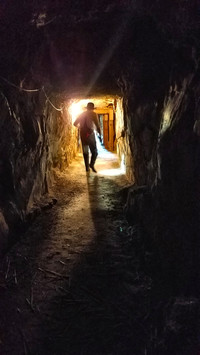 A tour of the Priest Mine outside Placerville, California, is a must for visitors to California gold country. Photo courtesy of Jim Farber. 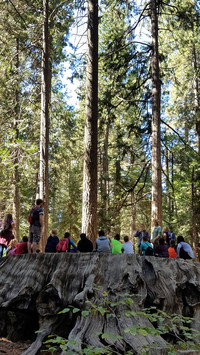 A ranger teaches youngsters on the massive stump of the Discovery Tree in California's Calaveras Big Trees Park. Photo courtesy of Jim Farber. 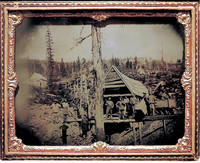 The Forty Niners were the first to discover gold during California's Gold Rush. Photo courtesy of Jim Farber.

A ranger teaches youngsters on the massive stump of the Discovery Tree in California's Calaveras Big Trees Park. Photo courtesy of Jim Farber.