If the hot springs of Loutraki, Greece, were good enough for Olympian gods and Spartan warriors, then count me in. That's what I was thinking as I closed my eyes while mineral-rich waters rained over my shoulders at Loutraki Thermal Spa, "the birthplace of Greek thermalism."

Mythology has it that Artemis, goddess of the wilderness and patroness of the hot mineral springs, first discovered the enchanting landscapes and healing waters of Thermae, as Loutraki was known in antiquity. I recalled museum paintings of Artemis bathing with the nymphs in the mystical "water of life." The myth goes on. When word about the deity's secret spread around Mount Olympus, it became the favorite getaway for the gods.

That therapeutic H2O still gurgles its way to Loutraki from the depths of Mount Gerania, enriched with minerals, salts and precious trace elements — Mother Nature's way of saying "take your nutrients!" And like the ancients, Greeks from around the country and visitors from around the world, including royalty, journey to the source of the curative springs in Greece's premier spa town.

Since opening as a formal spa in 1914 original wooden buildings gave way to Classical architecture in 1934, and in 2009 a major renovation added a modern expansion to the facility.

The gods could not have imagined that their wellness hangout in the woods would become the centerpiece of the city respected in medical circles for its balneology programs that treat woes from rheumatoid arthritis, skin problems and osteoporosis to sciatica, musculoskeletal issues and gynecological disorders. Its drinking therapy program (of the medicinal water, that is) helps with gastrointestinal and urinary ailments, gallstones and kidney stones.

Even before my fellow travelers and I could dip into the pools, a medical professional on staff took our blood pressure to ensure that we were good to go. Who wouldn't want to come here to relax, rejuvenate and heal?

Nestled in a tropical cove, Loutraki (Loutra is Greek for "baths") is an hour's drive northwest of Athens — the capital of Greece - and is the gateway city to the magical Corinthian Gulf, also called the Corinthian Riviera "where Athenians go for the weekend," a local in Athens told me, to refresh with a dose of authentic Greek life. Beaches, sailing, fishing. Traditional meals inspired by giagias, revered Greek grandmothers (pronounced ya-YAs). Wines, cheeses and sweets produced at nearby wineries, dairies and confectionaries run by generations of families. Europe's largest casino (Loutraki Casino Hotel). And at practically every turn, ancient churches, temples and ruins are normal sightings - reminders that Greece is our cradle of civilization.

Surrounded by the Peloponnesian Peninsula to the south and the Greek mainland to the north, the massive gulf is fed by the Ionian Sea. At 81 miles long and 20 miles at its widest it's a sophisticated region populated with romantic seaside resorts, farmland, mountain villages, vineyards and miles of olive-tree orchards that, like palm trees in the tropics, flourish in warm, sunny climes.

Loutraki is known not only for its famous curative springs but also for its proximity to the Perachora Peninsula, where we got a taste of the good life in more ways than one.

Greece first cultivated the olive tree way back around 3500 B.C. It was Athena, goddess of wisdom, who offered the gift of the olive tree that became the country's symbol of peace and wisdom to the city of Athens. Since time immemorial, oil pressed from the little but powerful fruit of the sacred tree has played an integral role in daily Greek life - in cooking (used instead of animal fat), as medicine (Hippocrates, the father of modern medicine, used it for his patients) and in religious ceremonies. At the ancient Olympic Games the olive tree branch was awarded to winning athletes, and at the Panathenaic Games (honoring Athena) a single winner walked away with literally tons of the prized olive oil.

While each village proudly claims to make the best olive oil, our young scholarly guide, Panagis Germenis, told us. "The truth is that all olive oil made in Greece is of extremely high quality ... its taste is original and we don't use pesticides."

Indeed, a visit to Kalielaion Oil Press factory in the village of Perachora attested to that when we were welcomed with a platter of chunky bread soaking lavishly in freshly pressed extra-virgin olive oil or, as the Greek poet Homer called it, "liquid gold."

Owned by the Georgiou family for more than 50 years, Kalielaion's present-day methods are not too different from ancient practices. Animal-driven presses are no longer used, but the finest first cold-pressed quality is still achieved with a state-of-the art centrifuge.

While Greece is third in the world for olive cultivation (there are more than 130 million olive trees), it leads as the largest producer of extra-virgin olive oil (350,000 tons a year) that's as pure as it gets. The factory's modest countrylike store stocks its various products - olives, olive oil, and olive oil soaps and candles that are also available at its shop in Loutraki.

A few miles away at the tip of Perachora Peninsula we took in the spectacular panorama of the gulf, central Greece across the waters, and the uniquely remote sanctuary of the powerful goddess Hera — wife and sister of Zeus, queen of the gods and protector of women.

First excavated in 1929 by Humfry Payne, director of the British School of Archeology in Athens, an impressive treasure-trove of artifacts was unearthed at the geometric complex of buildings constructed at the water's edge circa 820 B.C. The chapel here was dedicated to St. John, the oil press was built by the Romans, and the unusually large number of items for cooking and drinking established that the temple was a major dining venue for visiting "VIPs."

Speaking of food, our stop for lunch at Lido, a simple taverna on the quiet shores of Iraion Lake, was a scene urbanites like me don't see every day. While moms and giagias played with children on the sandy beach we dined alfresco a few yards away with a row of octopus tentacles dangling overhead - a sure sign that our servings of sliced octopus in olive oil couldn't be more fresh.

And as only warm Greek hospitality would have it, more dishes - hearty Greek salad (it originated as a rustic meal), crispy fried anchovies, shrimp, calamari and fried potatoes - became a feast inviting us to "Eat! Eat!" Family-style spreads are customary in Greece because meals are all about sharing, conversation and never rushing.

Gods, goddesses and settlers through time were on to something good when they inhabited Loutraki's priceless real estate. Awesome views. Abundant food from the sea and the land. And eternal "water of life."

To learn more about offerings in Loutraki, go to www.visitloutraki.com. 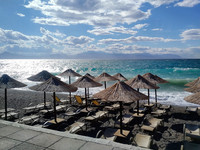 Beaches in the spa town of Loutraki and throughout the Corinthian Gulf are favorite off-the-beaten-path getaways for Greek locals. Photo courtesy of Athena Lucero. 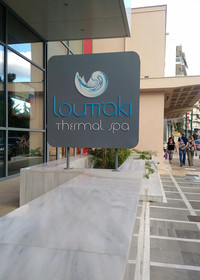 Loutraki, Greece's most ancient spa town, is home to mineral-rich waters and therapeutic programs that attract visitors from around Greece and from around the world. Photo courtesy of Athena Lucero. 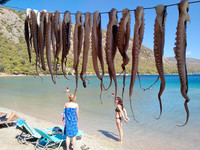 Dangling tentacles of octopus are a guarantee that the sliced octopus with olive oil on the menu at Lido, a traditional fish taverna on Iraion Lake, is fresh from the sea. Photo courtesy of Athena Lucero.