On the picturesque drive from Concord, New Hampshire, to Manchester, Vermont, the roads are pure country: two lanes of blacktop cutting through a heavily wooded landscape and past old villages and small cities that, unfortunately, have seen better days. The manufacturing heyday of New England has long been in the past, and the small hamlets look partially deserted. It was not unusual to discover an old clapboard home long abandoned and rotting away in the elements — like stumbling across an ancient monument while wandering around the Egyptian desert.

Then one arrives in Manchester and the sun shines brightly on an isolated Vermont city happily surviving in the modern world — all the while celebrating its illustrious past.

Here's a key tale: In 1863, Mary Todd Lincoln, the wife of President Abraham Lincoln, along with her two sons, visited the Equinox House in Manchester. Mary was so taken with the salubrious location in the valley between the Green and Taconic mountain ranges that she reserved rooms for her family to visit in 1865. In preparation for a presidential stay the entire second floor was made over to be suitable for a presidential suite. President Lincoln never made the visit because he was assassinated on Good Friday in April 1865 while attending a play at Ford's Theater in Washington, D.C. To this day, however, the rooms at the Equinox Resort remain "The Lincoln Suite."

The Equinox is itself a survivor, one of the great, grand, wood-structure resorts built in the later 1800s for the burgeoning mercantile class who made their fortune in America's big cities. In the summer they escaped the heat and turmoil to sojourn in rural mountains or on the shores of lakes and rivers. The Equinox is one of only a handful of these majestic artifacts that can still be called a grand hotel — it is part of Starwood Hotel's Luxury Collection of Resort and Spas.

Teddy Roosevelt and Calvin Coolidge stayed at the hotel, and sports and Hollywood celebrities still find their way to this gem that boasts a full spa, golf course and some of the best cuisine in New England. And the tastiest doughnuts in this region can be found right here at the hotel.

Despite all that, since I'm a history buff here's what I found fascinating about the Equinox: The main restaurant is called Marsh Tavern because it's the original Marsh Tavern, built in the mid-1700s and the site where Ethan Allen met to organize the Green Mountain Boys militia, which later captured Fort Ticonderoga. Now that's history.

For history with a more modern connection, consider this: A man named Franklin Orvis purchased the hotel in 1866 and it remained in the family for many decades. If the name "Orvis" seems familiar it's because the same family founded the Orvis brand and chain of outdoor sportswear stores. The mother ship of the Orvis chain can still be found in Manchester, as well as an off-price Orvis store just a short walk away.

I don't want to leave the subject of shopping without mentioning the most famous store in Manchester — the Northshire Bookstore, the kind of place that in pre-Kindle days would make an avid reader's heart skip a beat — and still does mine.

What makes Manchester so special is that so many of its great residential buildings that were built in 1700s or 1800s are still in use today. They have been restored to grandeur and look lovelier today than they did even when they were first erected. The most famous house in Manchester — if not in all of Vermont — is called Hildene, and it's open to visitors. That's because it was built by the son of President Lincoln.

Robert Todd Lincoln first visited the region with his mother and brother during the Civil War years and 40 years later purchased 500 acres of land to build what would become home to the Lincoln family for 70 years. Almost the entire estate is still intact and is now a historic monument and park. Many of the family's original pieces of furniture and decorative features are still in the house, and there is even a small museum dedicated to Abraham Lincoln, including one of the few stovepipe hats he wore that is still in existence.

Robert was no slouching scion. He was secretary of war in the Garfield and Arthur administrations, minister to England under Benjamin Harrison and chairman of the Pullman Co., the country's largest manufacturing corporation at the turn of the 20th century. Also on the property is a restored Sunbeam Pullman car. It's exquisite, so don't miss it.

Manchester has the good fortune to be located near the Stratton Mountain Resort ski area, but one doesn't have to wait until winter to enjoy the nearby mountains. The Equinox Resort was built at the base of Mount Equinox, which is now part of a preservation trust to keep the land natural forever. Rick LaDue, who is the Forest and Trails Steward of the Equinox Preservation Trust, will take visitors on hikes of the mountain. My wife and I signed up for one such walk in the first days of spring, when the temperature was still about freezing and snow threatened. It was a perfect day for a mountain hike: No other hikers clogging the trail, there were no mosquitoes and we had clear views in all directions.

While I stayed at the Equinox (www.equinixresort.com), I also stopped by to look at the totally rebuilt Taconic Hotel (www.taconichotel.com), which is now a Kimpton property. It's also a very handsome inn and, coincidentally, was at one time owned by the Orvis family.

By all means visit Hildene (www.hildene.org). Also do some shopping in Manchester, especially at the Northshire Bookstore: www.northshire.com. 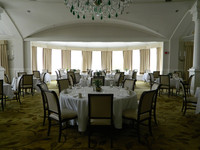 This classic dining room is in the historic Equinox Hotel in Manchester, Vermont. Photo courtesy of Steve Bergsman. 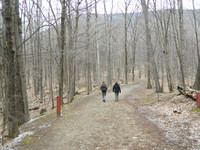 The Equinox Trust lands outside of Manchester, Vermont, are good for hiking at any time of year. Photo courtesy of Steve Bergsman. 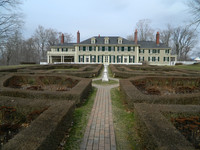