Take a Legal Trip to Cuba

Lying on a white sand beach at the edge of the turquoise sea, I could have been at any Caribbean destination. The major difference was that I was in Cuba enjoying an experience that few Americans could share for more than the past 50 years. That is likely to change somewhat in the future under the recent agreement for Cuba and the United States to re-establish diplomatic relations, lift trade barriers and ease restrictions on travel to Cuba by people from the United States.

Since 2011, people from the United States have been able to travel to Cuba as part of a group sponsored by a licensed tour operator and going there for one of several purposes, including educational, cultural and religious — and that's the way I went. While President Barack Obama's recent order will expand the list of reasons Americans may visit there, lifting all restrictions on travel, including for tourism, would require approval by Congress.

Those who go to Cuba under the new regulations will find a country of contradictions that make it an intriguing and inviting place to visit. The streets of Old Havana (Habana Vieja), the original 16th-century walled city, are lined by a treasure-trove of architectural gems. Mountain ranges rise dramatically from verdant valleys and fields of sugar cane. And almost everyone I met welcomed visitors with a warm smile on their lips, music in their souls, and a mix of both resignation and humor about the challenges of their lives.

Even vintage American-made cars from the 1950s, a prized possession for those who can afford them, add to the dichotomy. Some have been lovingly restored by well-to-do owners with the resources to do so. Most are junkers kept running by a combination of mechanical innovation, imagination and luck.

In recent years, renovations to formerly stately private homes in Havana - many of which now house several families — have been underway, especially in areas where tourists congregate. Given the backlog of structures that have deteriorated, however, there still are countless buildings whose former glory is hidden beneath crumbling facades and flaking paint.

Behind its faded beauty, Havana has attractions enough to fill many an interesting day. Some three dozen major museums make the city an art-lover's paradise. A number of them offer the unsubtle propaganda and praise for socialism and the Revolution that visitors to Cuba soon learn to expect. Others would rank as world-class wherever they were located, displaying works of art by the likes of Renoir, Rodin and Picasso.

The aptly named Museum of the Revolution focuses upon the uprising (1953 to1959) that led to the downfall of the dictatorial ruler Fulgencio Batista and the rise to power of Fidel Castro. Maps, weapons and other exhibits — many with English descriptions denouncing U.S. oppression, imperialism and capitalism — trace the Revolution in detail. An outdoor display area includes the tiny yacht on which Castro and 81 other men landed in Cuba to begin their improbable — and ultimately successful — revolution.

When I sought to exchange the confined space of museums to the world outside, I found the streets and neighborhoods of Havana to offer an introduction to living history. The Plaza de Armas, the most important square, was laid out in 1519 and served as the center around which early Havana arose. The Malecon, a sweeping boulevard between the city and the sea, is frequented by strollers, fishermen and lovers strolling hand in hand. The stately old villas of sugar barons and other wealthy Cubans who once resided in the upscale Miramar neighborhood that were abandoned following the Revolution now house government agencies, foreign embassies and business offices.

To gain a more complete understanding of Cuba, I also explored other areas of the island. Fields of sugar cane and what many cigar aficionados rate as the world's best tobacco yield to rolling plains where cattle graze. Cowboys (vaqueros) riding horses and farmers guiding plows pulled by oxen come into view. Hills where coffee is grown rise into mountain ranges.

The northern coastline is rimmed by the best beaches on the island. The resort complex at Varadero, a two-hour drive east of Havana, has long attracted vacationers from Europe and Canada who have been free to visit Cuba.

Explorations elsewhere on the island provide a wealth of experiences and impressions. Strolling the narrow cobblestone streets of Trinidad, which was founded in 1514, is to be immersed in a time capsule of Cuba's colonial past. Santiago de Cuba, the second largest city, is perched in hills overlooking the southeastern coast. Its past includes serving as the capital city during the mid-16th century, a slave port and a refuge for French settlers from Haiti.

In the little village of El Cobre just outside Santiago even the most ramshackle houses are neat, tidy and often decorated by foliage and flowers. Many of the people I encountered there — and elsewhere in Cuba — looked at me with curiosity, then smiled and offered a greeting in Spanish. One man gestured for me to enter his modest hut for coffee and to meet the family I spotted inside, an invitation that my schedule unfortunately prevented my accepting. After looking around to make certain no one was observing us, another rolled up the sleeve of his T-shirt to display for me an American flag tattoo on his upper arm.

The positive attitude that tattoo represented is held by many Cubans. In recent years they have been getting a small taste of economic freedom, at least in a limited way.

A number of the unpopular policies imposed by Fidel Castro during the decades when he ruled in Cuba have been eased by his brother Raul, who became president in 2008 when Fidel stepped aside due to illness. For example, Raul has lifted the restriction that prevented people from buying and selling property and automobiles. He also has encouraged limited private enterprise, and many new small businesses have sprung up, including restaurants and people selling pizza through the windows in their homes.

Those who visit Cuba under the new travel policies will have opportunities to observe these changes. They also will experience the friendliness of people whose lives have been challenging and lacking in luxuries. The attitude they have managed to retain is one of my lasting memories, along with the confusing, often conflicting impressions left by that country.

Those recollections linger, along with images of Cuba's natural beauty, glorious if often faded architecture and other attractions. With the lowering of barriers for people from the United States to visit, more Americans are likely to follow in my footsteps and return home with impressions of their own. 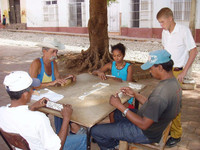 . A group of people enjoy an outdoor game of dominoes in Cuba. Photo courtesy of Victor Block. 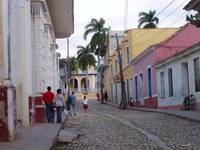 Trinidad, Cuba, provides a look back at the country's history. Photo courtesy of Victor Block.