Realm of the Galaxies

Three or four hours after sunset this week, get away from bright city lights, and take a gander around a pristine, rural sky.

Once there, I recommend that you sit back, relax and ponder what lies before you. Every light in the heavens is a distant sun, many hundreds of trillions of miles away — each so distant that its light has taken decades or centuries to reach our eyes. Each may be home to a planetary system and, perhaps, life forms gazing in wonder into their night sky. Each of these suns is part of our own Milky Way galaxy: our "home star city."

Pretty remarkable! But beyond the stars lie other galaxies — at least a trillion of them — that populate the cosmos far beyond the reach of the human eye.

Now, it's true that during the autumn months, we can easily spot the great Andromeda galaxy as a smudge of light between the stars, and from the Earth's Southern Hemisphere, we can see the Magellanic Clouds, two nearby galaxies entwined in a gravitational tango with our own Milky Way.

But that's pretty much it, as far as galaxies go. That's as far as the human eye can see without some optical help. Aim a small telescope skyward, however, and all that changes, especially at this time of year.

In the eastern sky between the Big Dipper, Coma Berenices and Virgo, lies one of the richest regions of galaxies visible to backyard telescopes. It's called the Realm of the Galaxies, and it's definitely worth an entry into your bucket list of celestial sights.

Some spring night, when the moon isn't up and you're far from city lights, scan your telescope slowly through this region, and you'll be stunned by the sight. Even an instrument of 4 or 6 inches in diameter will reveal tiny patches of fuzzy light among the much sharper stars — dozens of individual galaxies whose light left their sources when dinosaurs ruled the Earth.

Toward the constellation of Virgo, for example, lies the famous Virgo cluster of galaxies, a system of several thousand galaxies bound together by gravitation and located some 60 or 70 million light-years from our own Milky Way. Though we see only the brightest as tiny fuzzy glows of light, most are massive spiral- and elliptical-shaped structures with hundreds of billions of suns each.

Farther to the north — in the region of Coma Berenices, Berenice's Hair — we find the more distant Coma cluster. Lying some 400 million light-years away, this cluster is home to a thousand galaxies that astronomers have discovered are embedded in a region of hot gas. They tell us that, as the galaxies move through this material, they seem to become stripped of their gas and dust, the raw materials out of which new stars and planetary systems are born.

So, the next clear, dark night, take a telescope out for a spin through the cosmos. In just one short evening, you'll be able to visit not only stars throughout our Milky Way but also dozens of other galaxies across the nearby universe — a feat that would make even the great Captain Kirk envious. 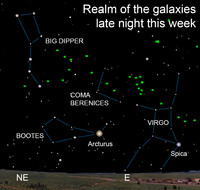 In the eastern sky between the Big Dipper, Coma Berenices and Virgo, lies one of the richest regions of galaxies visible to backyard telescopes.