Well, That's a Star of a Different Color!

One thing I've learned from helping stargazers lo these many years is that beginners often have some deeply ingrained misconceptions. Many think that the moon can be seen only at night and never in the daytime; others believe that the Big Dipper or the Milky Way is always visible in the sky. Still others think we see the stars as they appear now rather than centuries ago.

One of the most common misconceptions I've heard is this: "If you've seen one star, you've seen 'em all." This is a pretty understandable perspective; after all, stars appear simply as points of light. How different could they possibly be? Well, ask an experienced skywatcher and they'll tell you that no two stars are exactly alike. Each displays its own personality in a number of ways. One of the most visible stellar personality traits lies in a star's color.

Many people don't notice this immediately because the human eye is not capable of perceiving color under low light conditions. We know this to be true if we've ever looked around a relatively dark room; shapes and shades of gray are easy to spot, but colors are virtually nonexistent. Turn the lights on, however, and we find that we're surrounded by vibrant colors.

When gazing skyward at night, we discover that colors of even the brightest stars — if we can see them at all — are quite subtle. Younger eyes tend to see these better than older eyes. Binoculars or telescopes capture more light than the human eye, so we can use them to help make star color a bit more obvious.

A great place to start our search for stellar color is within the great constellation of Orion, the hunter. For sky viewers north of the Earth's equator at this time of year, Orion stands majestically high in the southeastern sky after dark; if you're south of the equator, however, it appears high in the northeast.

Orion's large vertical rectangle of four bright stars forms the hunter's shoulders and knees; at its center lie three stars that form a nearly straight line — the belt of the brawny hunter.

The star marking Orion's northeastern corner (the shoulder) is known as Betelgeuse, a word that comes from an Arabic phrase that means "armpit of the giant." Though it has grown fainter over the past few months (see last week's column), this aging red supergiant star glows with an orange light that is still easy to see. At the opposite corner (in the hunter's knee) lies sparkling Rigel, another supergiant that displays a slightly bluish-white color.

Star colors are more than just a curiosity; they tell us something about stellar temperatures. While our sun glows with a surface temperature of around 10,000 degrees F, reddish-orange stars like Betelgeuse are relatively cool (6,300 F). Bluish-white stars like Rigel, on the other hand, are tremendously hot (18,000 F); they can burn this furiously for only a relatively short time and therefore must be much younger than the sun.

After you've spotted these two fine examples, aim binoculars around the sky to see how many more colorful stars you can see. 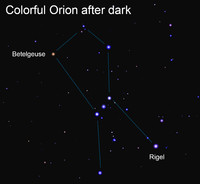 One of the most visible stellar personality traits lies in a star's color.