See More Than the Beach in Belize

I had heard that Belize has long stretches of lovely beach backed by magnificent multihued tropical foliage — and it does. I knew that its dense jungles hide intriguing Mayan ruins, some dating back to before the birth of Christ — and they do.

What surprised and delighted me during my visit to the New Hampshire-size Central American country was the treasure-trove of other attractions and lists of things to do.

Like most visitors I spent some delicious time relaxing on soft sand beaches. I also relived the mastery and mystery of the great civilization of the Mayas. I hiked hidden paths, enjoyed gentle canoe paddles and explored the jungle, rainforests and rivers that encompass inland Belize.

Just off its Caribbean coastline, some 200 island cayes (pronounced "keys") bask in the warm waters. Most visitors head for Ambergris Caye, which has exploded in recent years as a diving and snorkeling destination.

I preferred the more laid-back life on smaller, less-developed Caye Caulker. Its two narrow lanes are lined by brightly painted wooden houses. Most transportation is by foot, bicycle or golf carts.

One of Belize's most intriguing attractions is the melange of its residents. Mestizos, descendants of Spanish and Mayan ancestors and Creoles of mixed African and white blood, account for about 75 percent of the population of some 275,000. Mayans, East Indians, Chinese and even a smattering of Mennonites and Amish add to the mix.

Most intriguing to me are the Garifuna, descendants of African slaves and Caribbean Arawak Indians. Their lifestyle may be experienced in coastal settlements of wooden houses lining dusty streets, including Dangriga, Punta Gorda and Seine Bight.

I was fortunate enough to meet 78-year-old Erdengela Polonio, a buyei (healer) who was preparing to conduct a dugu ceremony in her wooden, thatch-roofed "temple" to cure two young girls who could not walk. Among preparations were a crude handmade alter displaying a combination of symbols, including images of Jesus and a collection of items — a pig's tail, cassava flour and plantain — laid out as offerings to the gods.

The goal of a dugu is to heal a person who has been afflicted because of something bad a relative has done. The ceremony involves many family members, can last two to three days, and includes singing, drumming and dancing.

I also relived the compelling story of the Mayans. Wherever you are in Belize, remains of Mayan sites are nearby. The jungle conceals more than 600 ruins of that once-great civilization. My introduction focused upon Caracol, the largest Mayan location in Belize, which sprawls more than 50 square miles and encompasses remains of some 36,000 structures.

Massive pyramids, broad plazas, ball courts and over 100 reservoirs are linked by more than 20 miles of roads that radiate out like spokes of a wheel. Hieroglyphic texts carved into stelae and other facades provide the names and sometimes portraits of rulers and descriptions of important historical events. Descendants of the Maya today live in villages of thatch-roofed wooden homes, dine on traditional foods such as corn tortillas and caldo (a kind of cabbage), and keep their customs alive in other ways.

Along with strolls through Mayan sites, very different kinds of walks tempt nature-lovers. A personal favorite was the Cockscomb Basin Wildlife Sanctuary, a remote rainforest known as the only jaguar preserve in the world. Because jaguars are nocturnal animals, human visitors have little chance to see one. As our guide, Santos Gonzalez, remarked, "The best place to see a jaguar is a zoo."

However, we did spot jaguar tracks and a wild pig and tapir. We encountered a troop of howler monkeys in the treetops, and they complained about our presence by their chorus of barking noises that can be heard for a mile. We also saw a crocodile half submerged at the edge of a river, a tarantula hidden beneath a fallen tree trunk and a number of the estimated 300 species of colorful tropical birds that live in the overhead tree canopy.

Caving is another popular pastime in Belize, and it doesn't have to be the crawl-on-your-belly, slide-down-a-rope kind of activity. You may choose a walk-in experience, canoe or kayak ride, or float in an inner tube.

I enjoyed a pleasant hourlong canoe exploration of Barton Creek Cave. Even without the human skulls, animal bones, clay pots and other evidence of past Mayan occupation, the beauty of the cave itself is entrancing. Multihued stalactites suspended from the ceiling reach almost to the water. The highest cavern soars to a cathedral-like height of 165 feet, then descends so low that boaters have to duck in order to pass.

As our canoe glided between walls just wide enough to navigate through, I recalled the open expanse of Caribbean beach I had enjoyed just hours before. That diversity — of nature, people and history — is to me the greatest appeal of a visit to Belize.

For more information contact the Belize Tourism Board at www.travelbelize.org.

White sand beaches are only one way to enjoy Belize in Central America. Photo courtesy of Victor Block. 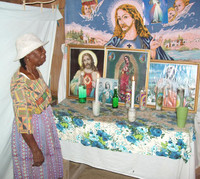 Erdengela Polonio, a healer in Belize, prepares for a ceremony to help people who can't walk. Photo courtesy of Victor Block.