The Seine: Inspiration of the Impressionists

This past spring my obsessive love for the French Impressionists' landscapes drew me to visit the sites they'd painted along the Seine River in Normandy. My itinerary began west of Paris to Le Havre on the English Channel.

Normandy's soft, clear light, the heartbreakingly verdant lushness, the Seine and its many tributaries, and the coast had inspired several Impressionists, the most devoted of whom were Claude Monet, Gustave Caillebotte, Camille Pissarro, Pierre-Auguste Renoir, Alfred Sisley and Frederic Bazille.

During the late 1800s, several of these painters had either settled in villages on the riverbanks or they often visited. Enthralled by their surroundings, they painted the changing moods and reflections of the water. This theme played a huge role in their unique styles and introduced "open air" painting.

Impressionism began in 1872 when Monet (1840-1926) painted a small misty scene "Impression, Sunrise," at the mouth of the Seine in Le Havre. An art critic scoffed at the caption, which ironically labeled Monet and his companions with the name "Impressionists."

Their art differed from the accepted themes of myths, historical and religious scenes that were recognized by the salon. Instead, Monet and his pals wanted to capture the movement and vibrancy around them, so they painted ordinary people living, working, socializing, relaxing and boating.

Their innovative techniques of colorful lively brush strokes were also in opposition to the accepted realistic styles. Parisian art critics and the public ridiculed and rejected their work, yet these artists courageously continued.

Monet always lived along the Seine in Le Havre, Paris, and the villages of Argenteuil, Vetheuil and Poissy until finally he settled in the village of Giverny. Here he planted an expansive garden and created a lily pond by diverting a stream.

In Monet's Giverny home I admired his personal items: his friends' paintings, Japanese prints, ceramics, blue-tiled kitchen and the bright-yellow dining room. In his garden, the flowerbeds, particularly his favorites — the tulips — were spectacular.

The pond's reflections of his water lilies, willows, trees and plants in the changing light dazzled me. I spent five hours photographing everything. In the late afternoon, the lily pads shimmered with a mysterious brown-purple hue and the trees and willows' dark green reflections floated on a gray background.

Meanwhile, his buddies, inspired by the beauty of the river and its banks and woods, also kept busy painting. Monet's great friend, Gustave Caillebotte painted "Regatta at Argenteuil," "Boating Party" and "Skiffs," which illustrate the joys of water sports. He built a boat for Monet to allow him to drift for up-close views of the foliage.

Renoir, another close friend, captured the changing times (in the late 1800s) by concentrating on portraits of ordinary people socializing on the river in his famous paintings "Luncheon of the Boating Party" and "La Grenouillere."

After a few nights in a super B&B in the hills above Giverny, I drove to Rouen and spent a day there to tour the Musee des Beaux-Arts, well-known for its Impressionism masterpieces and other art. Monet painted a memorable series of canvases depicting the changing light of day on the facade of Rouen Cathedral.

West and east of Rouen the Seine has scooped out amazing curls, des boucles, through high chalk cliffs and forested hills. For photos of the dramatic river, I drove up above Les Andelys to the ruined 12th-century Chateau Gaillard.

Pissarro depicted landscapes along the banks and accomplished a memorable painting, "The Pont Boieldieu in Rouen at Sunset." He adored Rouen, "the city of 100 bell towers." He also painted an awesome series of Le Havre's port and steamships in muted and misty grays, whites and blacks.

Sisley, another of my favorite painters, used casual brushstrokes to denote trees and flowing water in his river scenes, such as on the shore of the resort village of La Bouille near Rouen, where I took walks. Bazille, a gifted artist, tragically died very young in the Franco-Prussian War.

In Honfleur, on the south bank of the Seine, I enjoyed a seafood lunch at one of the numerous cafes on the quay overlooking the charming old harbor lined with tall, narrow buildings. I recalled that Monet's friend, Eugene Boudin, had lived here and painted boating scenes. Boudin's influence on Monet encouraged him to continue painting when he feared that he was a failure.

To reach Le Havre, a UNESCO World Heritage Site and one of the world's greatest ports, I drove over the Pont de Normandie, a modern bridge of soaring elegance spanning the Seine. In Le Havre, the Musee Malraux exhibits outstanding Impressionist work. The museum boasts interior sliding walls to allow the spaces to adjust to different exhibits.

Back in Paris, I returned to the Musee de l'Orangerie, to revisit Monet's water lilies, "Grandes Decorations des Nympheas," exhibited in two oval galleries built specifically for the eight vast canvases. His determination to conceive and complete this tremendously beautiful and large work, 300 feet long, 6.5 feet high, awed me. It was done in his old age while he suffered from failing eyesight. Imagine! This gift to France took him 12 years. Here and in Giverny, he has given us heaven.

I recommend reading "The Private Lives of the Impressionists" by Sue Roe.

The Normandy Impressionist Festival with masterpieces from France and around the world (portraits as the main theme) and hundreds of exhibits, events (music, theater, dance) in the region will be from April 16 to Sept. 26, 2016: www.normandie-impressionniste.eu.

Trains run frequently from Paris Saint-Lazare station to Vernon. Then rent a (previously reserved) auto or take a shuttle bus to Giverny: www:sncf.france.en.

Honfleur, Boudin Museum doesn't have a website but can be found on Google., likewise Le Havre Musee Malraux.

In Paris, the Musee de l'Orangerie is in the Tuileries on the Right Bank and not far from the Musee d'Orsay on the Left Bank: www.musee-orangerie.fr.

In Paris the banks of the Seine are a UNESCO World Heritage Site. Also Museum Marmottan-Monet exhibits Monet's paintings: www.marmottan.fr.

With regard to where to stay, there are wonderful places with welcoming owners in beautiful landscapes such as La Reserve B&B in the hills above Giverny: www.giverny-lareserve.com.

There are some dozen B&Bs and some hotels in Giverny. 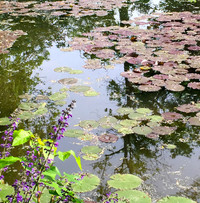 At Giverny in Normandy, France, Monet's water lilies were his favorite subjects for painting. Photo courtesy of Patricia Woeber. 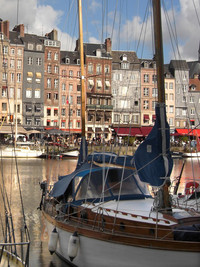 In Normandy Honfleur's Harbor is known as one of the most beautiful in France. Photo courtesy of L. Belither.