Traveling on the Grand Canyon Railway

I love trains in a childish, "here comes the choo-choo," gleeful sort of way. So ever since I heard that the Grand Canyon Railway had been resurrected, I've wanted to go on it. It took me 20 years, but finally I was on my way to Williams, Ariz., which is a quick 30-minute drive from Flagstaff.

The Williams train depot is the hub of a complex that includes a hotel, restaurant, gift shop and "pet resort." Since I was traveling without any fluffy companions, I proceeded directly to the ticket window. There are four classes of service on the train, and I opted to go cheap on the northbound trip to the Grand Canyon with a $37.50 coach seat and then splurge on the return with a $70 first-class seat. If I had been feeling really flush, there was also the option of an $85 seat in the observation dome or a $95 ticket in the luxury parlor cars.

Back in 1901, when the train first arrived at the Grand Canyon, it cost $3.95 round-trip and took three hours. The trip is a bit faster now, but it still covers the same 65 miles of track that winds through a forest of ponderosa pines and high desert.

The highlight of the morning trip up the track was a wandering musician dressed like a Wild West character who sang camp songs to the passengers. He even convinced some of the more enthusiastic passengers to join him in an off-key version of "I've Been Working on the Railroad."

The closer we got to the Grand Canyon, the more scenic the view and the windier the track became. The last half-hour is a slow crawl into the park.

At 11:45 we pulled into the Grand Canyon depot on the South Rim, and armed with a map and a water bottle, I went off to explore. I had been to the canyon twice before, but it still remained awe-inspiring. I walked along the rim and hopped on and off the free shuttle bus that goes from Grand Canyon Village along the South Rim.

After a couple of hours I was hot, sweaty and hungry, so I took myself to lunch at the El Tovar Hotel. Originally built in 1905 by the Santa Fe Railway company, the hotel is a classic grand dame. The dining room is dark and cool, and the waiters are used to sweaty hikers. After a sumptuous salad and attentive service, I was feeling like a bit of a grand dame myself. But historical fantasy comes at a price: Lunch was $40, including tip.

I still had a few minutes before the train was scheduled to depart, so I sat on a giant wooden swing on the hotel's porch and soaked up one more look at the canyon in the late afternoon light. I even remembered to take a picture and text it to my kids to prove that I was still alive after two days of playing hooky somewhere in the Wild West. Watching the sun sneak below the rim of the canyon, I felt lucky to be able to enjoy the view without worrying about having to drive back to Williams.

The train blew its whistle to announce it was time to get back onboard. This time I was in the first class "Buckey O'Neil car," which is named after the railway's original founder. O'Neil worked for many years to get tracks laid to the canyon, but he was killed in the Spanish American War while he was a member of Theodore Roosevelt's Rough Riders. He never lived to see his dream of a railway to the Grand Canyon come true. Years later, however, Roosevelt would be one of the most famous passengers to ride on the train. Other notable passengers have included John Muir, William Howard Taft, Dwight D. Eisenhower, Clark Gable, Jimmy Durante, Doris Day, Warren Buffett and Bill Gates. The Buckey O'Neil car was definitely more comfortable than the coach-class car — and there was bar service as well as a fruit and cheese platter.

Halfway back to Williams, three bandits on horseback flagged down the train and "robbed" us of any money we cared to pony up, walking down the aisle and collecting spare change from the delighted passengers. I decided to think of it as tipping the performers, who just happened to be wearing bandanas over their faces and brandishing realistic-looking guns.

The trip resumed and we arrived back at the Williams depot without any other dramatic incidents. I said goodbye to the train, already feeling a little nostalgic about the trip but glad I had finally made it.

The train sells out in the busy summer months, so it is advisable to book ahead. Rates vary by the season, and the railway offers package deals that include hotel stays at the Railway Hotel in Williams or at the Maswik Lodge in Grand Canyon National Park: www.thetrain.com.

Flagstaff, Ariz., is 30 minutes from the Williams depot, and there are dozens of hotels and motels there. I stayed at the Radisson Woodlands Hotel, which was clean and comfortable and cost $149: www.radisson.com.

The Grand Canyon National Park website has information about hikes and transportation within the park: www.nps.gov/grca/index.htm. 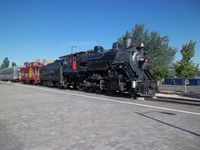 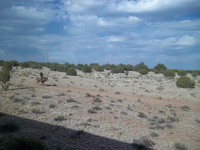 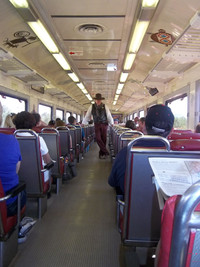 A cowboy chats with passengers on the Grand Canyon Railway. Photo courtesy of Maura Daly Phinney.