A Parade Through Pasadena

Pasadena offers a rainbow-colored range of attractions, as eternally enticing as a dangling plum waiting to be plucked. The city's New Year's Day Tournament of Roses Parade is a glorious spectacle appreciated worldwide, followed by America's favorite: Rose Bowl football. Still, New Year's Day is only the launching point for a free-spirited Southern California adventure. Award-winning museums attract visitors year-round, and a diverse selection of walking tours offer an inside peek at hip bohemian neighborhoods, passageways to fine dining, music al fresco and architecture that showcases California at its finest.

When it comes to surpassing expectations, eternally youthful Old Town Pasadena, a National Historical Landmark dating to the 1870s, raises the bar throughout its dynamic and pulsating 22-block area. Extending along Colorado Boulevard, one of California's prized thoroughfares, is a blend of 200 restaurants, colorful family-owned cafes, veiled alleyways, high-energy clubs, theaters, specialty shops and art galleries.

Old Town is bordered by Arroyo Parkway on the east, Pasadena Avenue on the west, Walnut Street on the north and Del Mar Avenue on the south, while the epicure's hour of glory is found on Fair Oaks Avenue between Green and Colorado. Brick-to-brick in one short block on either side of Fair Oaks, restaurants blend the pungent aromas of the world, all skirmishing for pre-eminence. The collection includes the 85c Bakery Cafe, 1 Ichi-Gyo-Iche-Et, Little Sheep, All India Cafe, Green Earth Vegan Cuisine, Himalayan Cafe (offering authentic Nepalese, Indian and Tibetan cuisine), City Thai with one of Pasadena's many multitalented chefs and Crepes de Paris, a small, family-owned French brasserie-style room with a dog-friendly patio.

A few blocks east via Colorado Boulevard and located in the Playhouse District is the striking Spanish Colonial Revival-style Pasadena Playhouse. Founded in 1917, the Playhouse is the official state theatre of California, a National Historic Landmark, and host to world premieres by Eugene O'Neill, Noel Coward, F. Scott Fitzgerald and Tennessee Williams.

Around the corner the popular El Portal restaurant, undeniably popular with Pasadenians for some 25 years, offers both northern and Yucatan Mexican dishes with live music on weekends and the kind of large patio that is essential to Pasadena's outdoor dining lifestyle. Intimate jazz and Latin concerts are offered throughout the summer directly across Colorado Boulevard on another patio adjoining Vroman's Bookstore, the oldest bookstore in Southern California, founded in 1894.

Culturally captivating, the Norton Simon Museum's exterior, seen by millions when the Rose Parade rolls by each January, is among the world's top private art collections with 1,000 works on display from a compilation of 12,000 objects. The estatelike museum highlights masterpieces by van Gogh, Rembrandt, Degas, Picasso, Monet, Cezanne and others. A splendid respite is the Garden Cafe tucked away in the gorgeous sculpture garden, where dining among art and nature creates a lasting memory.

For architecture aficionados, the 1908 Gamble House, a National Historic Landmark, is among the finest example of the early 20th-century Arts and Crafts movement, as are the Tournament House and Wrigley Gardens, circa 1908-1914, formerly owned by chewing gum magnate William Wrigley Jr. This command center for the Pasadena Tournament of Roses Association offers informative and detailed tours on Thursdays from February to August.

The iconic Rose Bowl stages a flea market to remember every second Sunday of the month. Perhaps the largest in the world, the Flea Market Stadium has a whopping 2,500 vendors selling everything imaginable with surprises every few steps. The entrance fee is $9 and parking is free. Plan to arrive early, and bring water and a hat to divert the relentless California sun.

A treasure is also found at historic City Hall. Opened in 1927 and listed on the National Register of Historic Places, it is one of the most distinguished buildings in the United States with its dazzling California Mediterranean-style architecture. In June the Pasadena Symphony and POPS present a free concert at City Hall tagged "Music Under the Stars." Concert or not, a stroll past City Hall is a must. Throughout the summer the admired Levitt Pavilion, a long-lasting summer venue for Pasadenians, is alive with free music concerts.

Nearby, in Altadena, the Coffee Gallery Backstage on Lake Avenue is another cherished musical venue. The intimate 49-seat room opened in 1998. Adjoining a bustling coffee gallery, it has excellent acoustics and showcases the best of folk, bluegrass, jazz and Latin musical groups that pop in from throughout the world. The ambience is that of a cozy backroom family-friendly session with smiles all around.

Pasadena's humor concerning life and parades is seen in the whacky Doo Dah Parade that takes place in November on Colorado Boulevard. Organized as a whimsical alternative to the Rose Parade, almost anything goes.

Pasadena boasts an impressive list of 1,000 buildings on the National Register of Historic Places. A great way to explore the city is via guided tours. 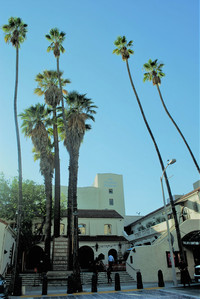 The celebrated Pasadena Playhouse is the state theater of California. Photo courtesy of Halina Kubalski.

Pasadena City Hall, listed on the National Register of Historic Places, is noted as one of the most distinguished buildings in the United States. Photo courtesy of Halina Kubalski.