A jet plane bearing the emblem of the U.S. Navy streaked low over a beach, dropped a bomb and returned to its base. It had attacked a corner of its own country. Today, beach towels and colorful umbrellas line that stretch of sand, and the only sounds are the surf and people enjoying a day in the sun.

Welcome to Vieques, Puerto Rico. If the name sounds familiar, that's probably because you've read or heard about use of the island by our country's Navy as a place to practice bombing and ship-to-shore artillery fire from 1941 until 2001. Protests by island residents, especially after a civilian security guard was killed by an errant bomb, became international news and added to the pressure for the Navy to cease operations.

Since it left the island in 2003, work has been underway to clean up contamination caused by the Navy during its stay. An ironic side to the story is that because of the decades of Navy presence on the island, much of its natural beauty has remained intact.

For the small but gradually growing number of vacationers who are discovering Vieques, the biggest draw is what the island does not have. That includes lines of souvenir shops, a movie theater or a traffic light. Instead of McDonald's and Burger King, fast food means tortillas, empanadas and other local fare available from Sol Food, a ramshackle truck permanently parked by the gate of the former Navy compound.

Beaches lack the crowds encountered on many Caribbean islands, and it's often possible to find a sandy seaside refuge to call your own for the day. They range from broad, gently curving seashores overlooking sweeping bays to tiny slivers of sand hidden at the end of narrow dirt roads punctuated by some of the most forbidding potholes I've encountered anywhere. The island has been ranked by TripAdvisor among the top 25 destinations in the world for outstanding beaches, and it doesn't take long to understand why.

An unusual attraction appeals to those in search of a more dramatic experience — the extravaganza put on by Mother Nature at unfortunately but accurately named Mosquito Bay. The show is put on by microscopic organisms that live in the waters which, when agitated by a hand or paddle, emit an explosion of bright blue light that dances across the surface. The result resembles a breathtaking mini-fireworks display in the sea and demonstrates why this shallow bay has been declared by the Guinness Book of Records to be the brightest known bioluminescent bay in the world.

Back on land other forms of life show up, at times in unexpected places. Chickens and roosters roam free, and iguanas may be spotted anywhere there's a sunny spot. More frequent are encounters with little horses that wander about the island, grazing wherever they please. Their ancestry is said to be traced back to 16th- century Spanish conquistadores.

When the conquistadors claimed Vieques after Columbus landed in Puerto Rico in 1493, they found it inhabited by the Taino people, one of the Arawak Indian tribes that lived throughout the Caribbean area. A subsequent rebellion by the Taino against the Spanish resulted in most of the natives being killed, imprisoned or enslaved. Traces of the Taino culture remain in some place names, foods and the use of medicinal plants. Over centuries, the Spanish also successfully defended the island from efforts to control it by France, Denmark and Britain.

A good place for a short course in island history is El Fortin Conde de Mirasol (Count of Mirasol Fort), built 1845-1855 on a steep hill overlooking the town of Isabel II. It houses a small museum with exhibits on anthropology, history and art. Isabel II (Isabel Segunda), named for Queen Isabel II of Spain, is the larger of the two main towns on Vieques. Its central square is a gathering place for locals and the site of occasional festivals and concerts.

Esperanza, the other town of any note, is little more than a cluster of casual restaurants, bars and modest guesthouses that line the Malecon, a paved esplanade squeezed between the main (and almost only) street and the harbor. Come evening, strings of colored lights brighten the setting, music blares from several establishments, and people crowd the streets and sidewalk chatting and sipping from paper cups.

The relative hustle and bustle in Isabel II and Esperanza contrasts sharply with the tranquil, laid-back atmosphere that pervades most of Vieques. For visitors to Vieques, these are among unusual juxtapositions that give the island diversity and appeal well beyond its size.

For information about visiting Vieques, call 800-866-7827 or visit www.seepuertorico.com/en/destinations/culebra-and-vieques. 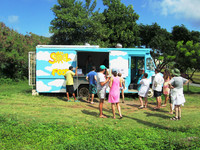 The beaches in Vieques, Puerto Rico, lack the crowds that gather on other Caribbean islands. Photo courtesy of Victor Block.