A Holiday Visit to Branson

The holiday season may just be getting under way in most of the country, but in Branson, Missouri, the lights have been twinkling and the carols ringing out since the day after Halloween.

"We celebrate Christmas before Thanksgiving in Branson," said singer Jimmy Osmond during Andy Williams' Christmas Show at the Moon River Theatre. "We like it that way."

And so do the hordes of visitors who come to kick off their own celebrations. This year that crowd included me.

My merry sojourn began at Silver Dollar City, an 1880s theme park just outside of Branson. On warmer days one of its main draws is Outlaw Run, so-called the world's most daring wood roller coaster, along with 30 other thrill rides and attractions.

There's also Marvel Cave, around which the park was originally established. Discovered by the Osage Indians in the 1500s, it was later mined for bat guano to make dynamite and later still opened for tours conducted by two sisters. When they retired, the area was leased by a family from Chicago who had come on vacation, and they're the ones who surrounded the cave with more fun activities and developed the park.

At this time of year, however, SDC is decked out for what it calls "An Old Time Christmas." Trees and buildings throughout the park are ablaze with some 350 miles of lights, and this year each day ends with "Rudolph's Holly Jolly Christmas Light Parade," which celebrates the 50th anniversary of the first airing of the most-famous reindeer's television special.

Two Broadway-caliber indoor productions also celebrate the season. At the Red Gold Heritage Hall "It's a Wonderful Life" is playing, and at the Opera House is "A Dickens' Christmas Carol." Both have been adapted from the original stories and turned into hourlong musicals by the park's director of entertainment, Brad Schroeder. And despite their being classics, they are filled with surprises — like "You're a Mean One, Mr. Scrooge" being sung to the tune of the Grinch's song and a hysterically funny Ghost of Christmas Present.

The food on offer at this time of year tasted more like it had come from my grandmother's kitchen than a professional one. My favorite treats were the cinnamon rolls at Eva and Delilah's Bakery, the apple dumpling I had for lunch and the wassail I sipped at the homestead cabin, where a cook prepares food as it would have been made in the 19th century. It's also possible to learn how to make some holiday goodies at the park's Midwest Living Culinary and Craft School, where resident foodie Debbie Dance Uhrig demonstrates whipping up appetizers, brunch and candy.

Another surprise at Silver Dollar City was that I was able to check several people off my gift list. When the current owners of the park first decided to make visiting the cave more interesting, they called on area artisans to set up shop around the entrance to work on, demonstrate and sell their wares. Today it's possible to watch glass-blowers, wood-carvers, soap- and candle-makers, basket-weavers, coppersmiths and potters create works of art — and then to buy them in the adjoining stores.

Now that I was in the mood to shop, I found plenty of opportunities back in town, too. One was the Tanger Outlets mall and another was Branson Landing, along the Taneycomo lakefront. Shopping in Historic Downtown Branson was especially interesting. I started at Dick's Oldtime 5 & 10.

"I've never seen so many things in one place!" I overheard a woman say to her companion, and I had to agree. The aisles were filled with items that ranged from old-fashioned candy and embroidery supplies to Elvis Christmas-tree ornaments, sock monkeys, toys, games, dishes, underwear and boxed ladies' handkerchiefs — again evoking memories of my grandmother.

Just down the street was a shop selling Victorian furniture, clothing and dolls, and nearby was another that specialized in pieces made by American Indians. There were several antique stores and one secondhand shop that billed itself as "A Classy Flea Market."

At the end of a day of shopping, Branson offers many familiar dining possibilities, but I opted to try something off the beaten path and wound up having one of the best meals I've ever eaten. The unusual spot was the Keeter Center at College of the Ozarks, which nicknames itself "Hard Work U." That's because students are admitted based on need, grades and character, and they work on the campus in lieu of paying tuition.

My entree (made and served by students) was a turkey roulade with grain stuffing that was then wrapped in grilled bacon (raised on the campus) and garnished with gooseberry and cranberry chutney. The vegetables were roasted broccoli and cauliflower from the school's gardens, and the dessert was a chocolate ganache tower garnished with an edible chocolate butterfly.

Another night I had dinner on the Showboat Branson Belle. The food was good, but what made the evening memorable was actually paddle-wheeling on Table Rock Lake while being entertained with a holiday show at the same time. The star was Janice Martin, an aerial violinist who played upside down while dangling from ropes high above the stage. She was joined by a lively group of singers called the Showmen and a comic magician, Christopher James, in a show called "Made in the USA."

A more sobering attraction in Branson is the Titanic museum. The ill-fated ship has been re-created here (and in Pigeon Forge, Tennessee), and it, too, is beautifully decorated for the holidays. Patrons walk through an iceberg to enter, and once inside it really does feel like being on a ship. Guides take on the roles of crew members and show visitors what the voyage must have been like.

Mine was Jamie, a first-class maid, who showed me through the 14-story, four-blocks-long "ship." Before we began she handed each member of her tour a boarding pass with a real passenger's name and a short biography on it. At the end of the tour we were able to find out how those people fared. I was delighted to see that my Kate Herman, who was 24 when she sailed, survived and lived to be 95.

Jamie told me that children like coming to the museum because they can participate in such activities as scavenger hunts and shoveling coal for the boilers. The artifact that most moved me was a thermos in which a father handed down warm milk to his family in a lifeboat. Then he waved goodbye to them and went down with the ship.

Branson is famous, of course, for its musical shows that feature glittering sets and lavish costumes. What makes them even more fun is that the performers come out afterward to greet audience members and sign autographs. I watched as many performances as time would allow — from an Elvis impersonator singing "Blue Christmas" to violinist Shoji Tabuchi, but my favorite was the classic Andy Williams show. The singer died in 2012, but the Lennon Sisters and Osmond Brothers keep his legacy alive.

"Before he passed he said he wished that we would carry on the tradition," Janet Lennon told me in an interview. "It is an honor and privilege to do that."

The sisters are now grandmothers, and one of the highlights of their show is a song-and-dance number with Janet's three grown-up granddaughters.

But come mid-December most of the holiday shows will shutter and the entertainers will leave town. Like everyone else, they want to be home for the holidays.

To get to Branson, I flew American Airlines from Minneapolis/St. Paul to Chicago and connected with a flight to Springfield, Missouri. I stayed at the centrally located Hilton: www.hiltonsofbranson.com.

Keeter Center at College of the Ozarks: www.cofo.edu 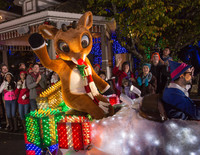