Rolling Through the Outback on the Indian Pacific's Christmas Train

It was mid-December and a heat wave had embraced Australia. Record-setting temperatures were searing the land from high 90s in Sydney and Adelaide to blast-furnace heat in the great Outback.

But I was cool because I was riding the air-conditioned Indian Pacific Railway across the southern expanse of the country to the west coast city of Perth, a four-day transcontinental tour through the vast, endlessly changing and sparsely populated plain of central Australia.

The landscape came into focus through the large windows on the train, beginning with the thick eucalyptus canopy draped over the valleys and gorges of the Blue Mountains outside of Sydney through the undulating hills and farmlands of the Great Dividing Range and the starkness of the salt lakes and sand dunes of central South Australia.

Millions of stars revealed themselves in the pitch-dark night skies, illuminating the wild and untouched but wondrously and naturally manicured expanses, amazingly clean and as well laid out as a deliberately planted city park. The journey ended with a straight-shot passage of rail, the longest in the world at about 300 miles, across the arid and infertile Nullarbor Plain and into the green zone of Perth on the west coast.

I was on the Christmas Train, which stopped in remote towns and railroad depots to bring Santa, toys and entertainment (this trip recording artist and TV personality Brian McFadden) to the children and families who work the isolated ranches and mines in this great stretch of land.

The annual event was also raising awareness and funds for the Royal Flying Doctor Service, which brings much needed medical care to remote areas of central Australia.

The Indian Pacific journey, which ranges over 2,700 miles from coast to coast, began operating in 1970. The train is one of the great rails of the world with sleeping cars and wide windows that expose magnificent vistas that unspool like a documentary film as you travel the country. The gentle rocking of the train encourages deep sleep, and each berth has its own sink, toilet and shower facilities, with access to music. Regular updates and travel commentary on the ever-changing landscape are reported over the cabin speakers.

Along the way we could see large groups of kangaroos and emus as well as an occasional camel, lots of sheep and cattle, a menagerie of birds that included the pink-throated galah and the white-and-gray-feathered cockatoos, the magically fluting magpies with their enchanting songs and the joyous squawking of the starlings. We also saw the bird that appears in the train's logo, the wedge-tailed eagle, soaring above the scorched earth with a massive 7-foot wingspan and an eye for native fauna that included rabbits and other small creatures that scuttled along the flatlands.

Other welcome amenities on the train include the club lounge and dining car, the Queen Adelaide, where passengers can enjoy drinks and gourmet meals (which are included in the travel package). Chefs prepare the meals on board in specially designed kitchens, and seasoned staff members serve in elegant surroundings. The experience is like train travel from an earlier, more genteel age. Costs range between $1,600 and $3,500 (the Australian dollar is on par with the American dollar), depending on the level of service. In the peak months of August to December, there are two trains a week, and about 70,000 passengers ride the rails each year.

Outside of Sydney, Adelaide and Perth, the Christmas Train stopped in the town of Broken Hill, where children from the Assumption School sang Christmas carols with McFadden, then went on to several tiny whistle-stops in the Outback, including the town of Cook, with a population of four. Santa was greeted as "Ho Ho" in a remote stop near an indigenous settlement.

The last stop in the Outback was the mining town of Kalgoorlie, with a checkered history of dance halls and debauchery, but this time it provided the largest turnout on the tour. Along the way parents drove their children hundreds of miles to meet the train at the various depots to celebrate the holiday.

For information on the Christmas Train, the Indian Pacific and other rail tours available in Australia, from north to south as well as east to west, contact Great Southern Rail: www.greatsourthernrail.com.au.. 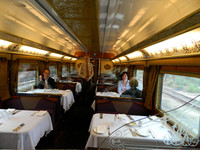 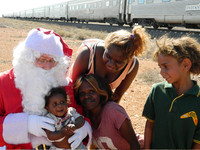