Croatia's coast unfurls along the Adriatic Sea as a ribbon of coves and peninsulas that curve along the shore for more than 1,100 miles. Many of the nearly 20 million tourists (in 2018) soak up the sun and the scenic views in the historic and stunning coastal towns. Here are some highlights, tips and suggestions for getting away from the crowds.

In the northern Adriatic, Rijeka, named a European Cultural Capital for 2020, is turning its once bustling industrial plants into arts centers. The Museum of Modern and Contemporary Art moved into a former sugar factory in 2017, adding gallery and event space. Stop by Galerija Kortil, part of the Croatian Cultural Center, to see special exhibitions. Take in sweeping city and sea views from Trsat Castle, ruins partially rebuilt in the 20th century. In season a bar serves drinks and the stage hosts concerts. For street life, stroll Korzo, the city's main pedestrian promenade lined with shops and cafes, and Riva, whose sidewalks parallel the water.

The Venetians built Zadar's city walls in the 16th century. Less crowded than Split, Dubrovnik or Hvar, Zadar's Old Town charms with its fish and fruit markets, cafes, Roman ruins, centuries-old Church of St. Chrysogonus and impressive Cathedral of St. Anastasia, as well as its shady parks near the Land Gate. Along the oceanfront, two modern installations draw visitors. The Sea Organ emits whistling notes when waves force air through hidden pipes under the quay. At night, the 300 solar panels of the Greeting of the Sun create a programmed light display. Be sure to eat lunch or dinner at Bistro Pjat, an unassuming Old Town restaurant that serves some of the best local fare in Croatia.

Both Split and Dubrovnik thrum with hordes of visitors. To get away from the crowds in Split, visit the nearby island town of Trogir. Although the main square near the 12th-century Cathedral of St. Lawrence fills with visitors, find breathing space and gain a sense of the medieval era by meandering the narrow streets and alleys away from the bustling squares. For breathing room in Dubrovnik, consider kayaking around the Old City's walls or taking a boat ride to Cavtat, a seaside town nine miles from Dubrovnik whose picturesque harbor attracts boaters and those seeking a quieter spot for lunch or an afternoon coffee than can be found in Dubrovnik.

Popular Hvar town swells in summer from 4,000 inhabitants to more than 20,000. Somehow the Old Town with its large open square wears the crowds well. Check for concerts and plays at the Hvar Public Theatre. The venue reopened in May 2019, restored to its 1612 splendor. We discovered the best boutiques and restaurants by meandering along the winding side streets.

Another way to lose the hordes is to explore Hvar island. The island's lavender fields bloom in July. Several companies offer bicycle tours with electric bikes that assist cyclists. Outings take you past the purple hillsides and to such picturesque towns as Brusje and Vrboska, known for its stone houses and bridges over the canal. 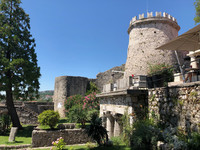 Trsat Castle in Trsat, Croatia, offers excellent views of the sea and the surrounding area. Photo courtesy of Candyce Stapen. 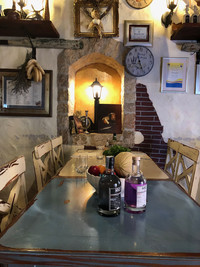 The Hvar island town of Vrboska in Croatia is known for its stone houses and bridges. Photo courtesy of Candyce Stapen.