A lot is happening on Stone Island (Isla de la Piedra in Spanish), an islandlike peninsula just a stone's throw from downtown Mazatlan in Sinaloa, Mexico. A botanical garden opened on one end, but now, more than two years later, it is still a well-kept secret. Even longtime residents don't know about it.

The formal name of the garden is Amaitlan, and it is part of a real-estate development that now appears to be dormant. The gardens are well-built, with stone pathways and benches to enjoy as one takes in the different views. The first time I was there I saw only a handful of egrets, but during my most recent visit I saw some 30 take flight. It was breathtaking.

The gardens stretch over nearly five acres and feature five different botanical environments, including a butterfly garden, a cactus garden and a tropical fruit garden. One could crisscross the garden in 20 minutes or spend two hours relaxing and strolling through the grounds.

"Tranquility — that is what you experience at the gardens," said Portland resident Lori McDougall after a recent visit.

Don't be surprised to see young women in gowns followed by photographers. The garden is a popular backdrop for wedding photography and photography of young women about to celebrate their traditional Quincinera - the coming-of-age party for Mexican girls on their 15th birthday.

The best time to visit the gardens is during the early morning or late afternoon to avoid a hot sun. The journey begins with a small boat ride that leaves from one of two docks near the Plaza Machado in downtown Mazatlan. The boat ride across the channel is short, lasting about seven minutes; the cost round-trip is only $1.50 U.S. or 30 pesos. Entrance to the garden is free. Bug spray and binoculars are a must.

On Sundays local families from all over the city venture to the island and the long row of a dozen or more palm-shaded fish restaurants that offer seating on the sand. Popular dishes include ceviche, lobster and fillet of fish cooked in garlic and butter.

Visitors have several options for staying overnight on Stone Island. One possibility is Estrella del Mar, a traditionally designed resort built in 2010 with two tennis courts, a Robert Trent Jones Jr. golf course and a spa, all of which are undergoing a facelift. Beachfront condos are also available. The resort also features almost four miles of undeveloped oceanfront and sometimes stellar sunsets. It takes 35 to 45 minutes to drive into the city, but Mazatlan's International Airport is just 15 minutes away.

Plans calls for a new swim club, spa and tennis center and a new compendium of tours, including a tropical bike tour down the backbone of the peninsula, which just two years ago was connected by a deeply rutted dirt road. Last year the dirt road was replaced by a new asphalt road linking the village of Stone Island and Estrella del Mar and cutting travel time from more than an hour to just 12 minutes.

I did the new bicycle tour with Daniel Romero y Pelayo. He transferred the participants in a vehicle with new bicycles on a rack. We began the tour at Goat Rock on a hill with a view of Stone Island and the restaurants on the beach. There is such little traffic on the new road that it makes for a perfectly safe bicycle path.

Romero y Pelayo, a college graduate who speaks fluent English, pointed out several mountain goats lounging on the hillside. The tour was broken up with rest stops and filled with local lore. In the countryside we rode through groves of mango trees and coconut palms. Then we stopped at a local home, where we watched a woman prepare cocada, a regional dessert made of coconut flakes. The tour included a lunch of fresh fish, rice and salad at a new restaurant on the island called Palapa del Che.

President Enrique Pena Nieto is reported to have built the road on the island as a gift to his friend Carranza Beltran, the resort's owner. Nieto plays the course at Estrella del Mar every three months, according to Brian Werner, the resort's general manager. "Every three months, like clockwork," he said. "First the president plays Punta Mita in Puerto Vallarta and then he comes here to play Estrella del Mar."

But you don't have to be the president to enjoy this beautiful place. McDougall says the next time she comes she'll plan to spend a lot more time on the island, most of it in the garden. 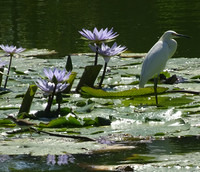 An egret lands on a lily pad at the Amaitlan botanical garden on Stone Island near Mazatlan, Sinaloa, Mexico. Photo courtesy of Stuart Wasserman.