The shaded wraparound porch at T.C. Steele's home in Brown County, Indiana, looks like a diorama. In the foreground wicker chairs flank the front door; dry, scattered leaves remind me that it's fall; and the pale hues of the woods just beyond look like a watercolor. Now I see why American impressionist painter Theodore Clement Steele, Indiana's most important landscape painter, fell for the scenery and lighting of the southern countryside where he settled and painted at his home until his death in 1926 at the age of 78.

Steele was famous for his pensive landscapes but made his income painting portraits in Indianapolis. A new state capital at the time, it was determined to have the best artists paint portraits of its citizens and leaders. That being the case, a group of patrons sent him to Munich, Germany, for five years between 1880 to 1885 to study the paintings of the Old Masters at the Academy of Fine Arts.

Born and raised in Indiana, Steele began studying art at Waveland Collegiate Institute in Montgomery County. He continued his studies in Chicago and Cincinnati before his move to Indianapolis.

While in Munich, he studied with four other Indiana landscape painters — William Forsyth, Otto Stark, J. Ottis Adams and Richard Gruelle. The five became known as the Hoosier Group and were contemporaries of French Impressionist Claude Monet. When they returned home they dominated the Indiana art scene. The Hoosier Group formed the Society of Western Artists with Steele serving as its president. The most well-known of the group, Steele became known as "the painter of Indiana." His works are exhibited throughout the state, the country and internationally.

Built in 1907 on 211 acres of land, the hilltop house was designed by Theodore and Selma (Neubacher) Steele in simple vernacular style. Today it still contains their original furnishings, decorative pieces and hundreds of Steele's paintings. They named the home "House of the Singing Winds" because of the breezes that blew through the screened porch. This period in Brown County was his last chapter, our guide explained to our small tour group as we walked from room to room. His first wife, Mary Elizabeth "Libby" Lakin, died from tuberculosis in 1899, a devastating loss for Steele as he considered Libby to be his best art critic.

As Theodore painted the days away at the House of the Singing Winds surrounded by panoramas of the hills and valleys, Selma's magic was in landscaping the grounds and building gardens that still flourish today for the enjoyment of visitors who come to the site: an "allee" of flowering trees, shrubs and perennials, walkways of local limestone, a pergola draped with wisteria, hillsides covered with irises, rock gardens, old-fashioned roses, heirloom hydrangeas, fragrant peonies, daffodils - and a sundial. Selma's lush gardens appear in several of Steele's paintings. She graduated from the Pratt Institute in Brooklyn, New York, with a specialty in textiles.

"She had an incredible eye for design," our guide told us. "...and her shawl collection is still housed in the State Museum in Indianapolis." Lucky for us, we saw one of Selma's shawls on the settee and another folded over the piano.

The living room exudes a lived-in warmth. Steele's paintings hang on the walls and books fill built-in shelves along one wall and on either side of the wood and stone mantelpiece. I felt the painter's presence in the room as if he were looking out through the window to the natural beauty that inspired him each day. Carved into the mantel is the Gaelic saying, "Every morning I take off my hat to the beauty of the world."

In the adjacent bedroom Steele's leather slippers are still on the floor beside his bed. The airy kitchen is decorated with stenciling done by Selma as well as cabinets and furniture designed in the Arts and Crafts style.

We continued through the dining room that leads to the kitchen, that leads to a corner nook, the bedrooms and Steele's original art studio that opens to the west side of the living room. Windows look out to Selma's gardens and the countryside.

Just yards south of the house within view of the kitchen sits the immense 30-foot-by-50-foot Large Studio built in 1916 that looks more like a barn - a size Steele needed because he painted, exhibited and sold his paintings here. Warm natural light beams through a wall of windows on the studio's north side.

We stood in awe surrounded by Steele's landscapes and portraits. In one corner of the room is his workspace with empty tubes of paint, his brushes, palette and his painting jacket. And in another corner of the studio I see a foothill painting of Redlands, California, where he painted landscapes while visiting his son, an engineer, who lived there.

In memory of her husband, Selma donated the property — the house, the Large Studio, other structures, her gardens, landscaped grounds, a nature preserve and hiking trails — to the Indiana Department of Conservation (now the Department of Natural Resources) in 1945. Today it is operated by the Indiana State Museum. In 1973, the site earned a spot on the National Register of Historic Places.

I must return to T.C. Steele's home and studio. This time, though, it will be in the spring so that I can witness the colorful blooms of Selma's gardens.

The living room at the T.C. Steele State Historic Site in Brown County, Indiana, remains exactly as it was when the artist and his wife lived there. Photo courtesy of Athena Lucero. 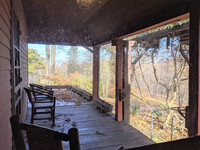 The wraparound porch at the T.C. Steele State Historic Site in Brown County, Indiana, is one of the places where the artist could take inspiration for his Impressionist paintings. Photo courtesy of Athena Lucero. 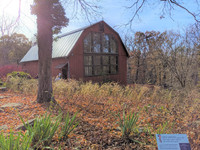 Built in 1916, the Large Studio at the T.C. Steele State Historic Site in Brown County, Indiana, is where the artist painted, exhibited and sold his paintings. Photo courtesy of Athena Lucero.

The living room at the T.C. Steele State Historic Site in Brown County, Indiana, remains exactly as it was when the artist and his wife lived there. Photo courtesy of Athena Lucero.