The Bayreuth Synagogue looks little like a Jewish house of prayer.

Decades earlier the anti-Semitism had more dire consequences. Still, the synagogue, which dates to 1760, remains.

"It is the oldest running synagogue under the same roof in Germany," said Gothart, a friendly man with an impish smile who devotes himself to nourishing the community. He pointed with pride to the building, completely remodeled by 2018; a congregation of 500 people, up from the 40 in 1967; and the cultural center and museum under construction across the street.

The story of how Gothart came to his calling and the synagogue's survival contains the kinds of twists and magical coincidences found in fairy tales or in the hearts of true believers.

In 1759, Bayreuth's Margrave Frederick, who had a Jewish chess player and painter in his court, sold the town's lavish Opera House, built in 1748, plus a second building to Jewish businessmen. In 1760 they opened a synagogue in the smaller building.

On Kristallnacht, November 1938, the Nazis ransacked the synagogue and stole 28 Torahs but didn't burn the building because a fire would have destroyed the Opera House next door.

"At the end of the war, the Americans bombed Bayreuth but not the synagogue, so the synagogue protected the Opera House next door," Gothart said with a twinkle and a rhetorical finger in the air.

The renovated synagogue has little adornment. The chapel exudes a modern, community-room look. Only a purple flag with a Star of David adorns the bimah, the podium from which the Torah is read. Following Orthodox rules, the sexes pray separately. Men sit downstairs and women, upstairs. Gothart invites rabbis from America and Europe to talk about different kinds of Judaism.

"We conduct services in Hebrew and we have books in Hebrew and English and Hebrew and Russian. Many congregants came from Russia in the 1980s and 1990s. We have to give them their heritage back," Gothart said.

That mission began with Gothart's parents. Born in Poland, they married in the Warsaw Ghetto at 16 and 17 and fought in the Warsaw uprising.

Miraculously, they survived, but they did not know if the other had perished.

After liberation, Josef, Gothart's father, who knew English, took a job with the Americans in Creussen, a small village near Bayreuth.

"Some years later my father found a Hebrew newspaper that had names of the displaced. It had my mother's name (Rivka) and said she was in Sweden. My father contacted her, they met in Frankfurt, and he brought her to Creussen," says Gothart, who was born in Bayreuth.

His parents helped re-established Bayreuth's Jewish community. The first Jews arrived from Bamberg, Nuremberg, Munich, the children of the displaced who came back. Many left again.

Gothart, who is in construction, volunteers his time.

"This work I do is without pay. My parents felt they had to keep the Jewish tradition alive and now I am doing it. How can I explain it to you? It's like a door that is opened and I have to walk through it."

The Bayreuth synagogue may be toured by prior arrangement. Contact the Bayreuth Marketing and Tourism Office: www.bayreuth-tourismus.de.

We stayed at the Hotel Goldener Anker, a lodging with Old World charm and an exceptional breakfast. Prices start at about $225: www.anker-bayreuth.de. 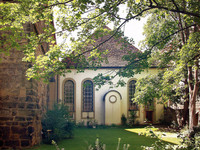 The Bayreuth Synagogue dates to 1760 and is the oldest operating synagogue in Germany. Photo courtesy of Bayreuth Tourism and Marketing. 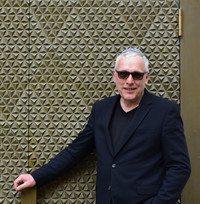 Felix Gothart, the chairman of Bayreuth's Jewish community in the Franconia region of Germany, stands in front of the doors of the renovated synagogue. Photo courtesy of Candyce Stapen.

The elaborately decorated Opera House in Bayreuth, Germany,  built in 1748, was spared during World War II, thus also saving the synagogue next door. Photo courtesy of Bayreuth Tourism and Marketing.