An Intergenerational Trip to Baltimore

"Can we ask someone for help?" Mollie inquired, her voice exhibiting the anguish we all felt.

"Not yet," I replied, trying to sound as confident as possible. "Let's give it one more try."

It took less than five minutes for me to capitulate.

"OK, let's ask that family over there."

Approaching the group, I explained that we were participating in a city-wide scavenger hunt, couldn't decipher the next clue and needed assistance. The father, his wife and their two children broke into laughter.

"We were just going to ask you for help," the dad explained.

Thus began an intergenerational weekend trip that my wife and I planned to celebrate our teenage granddaughter Mollie's birthday. We had two goals: give Mollie and a friend a special treat and test our theory that it's not necessary to travel far to combine a good time with a learning experience.

We went no farther than Baltimore, less than an hour's drive from our home in Washington, D.C. The experiment convinced us that anyone anywhere can follow our game plan and turn a short commute into a memorable getaway.

Our research turned up a surprisingly long list of inviting things to see and do in our neighboring city. We showed the options to Mollie without revealing our destination, then compiled her selections into what we hoped would be a workable itinerary. As we drove toward Baltimore, we resisted Mollie's pleas to reveal our destination. Then we turned off the highway into the city, wondering if our experiment was doomed to failure.

Day One: Ranked first on Mollie's wish list was Urban Adventure Quest, a scavenger hunt that combines an intellectual challenge with visits to some of the city's major attractions. The first clue directed us to find a large ship's anchor, which we soon discovered. A statue of William Donald Schaefer, a former mayor of Baltimore, also was easy to locate. However, hints that required us to solve a math problem and complete a crossword puzzle were more challenging — hence our decision to seek the previously mentioned assistance.

After completing the first activity we headed for our next destination: the world-class National Aquarium. There we came face to face with sharks and razor-tooth piranhas, spotted an emerald tree boa napping on a branch and understood why oversize tree frogs and turtles have "giant" as part of their name.

Touch pools became instant favorites of our young companions, who delighted in making contact with horseshoe crabs, stingrays and other denizens of the seas. Mollie patted the top of a jellyfish, and both girls ignored my I-thought-humorous query about what flavor the jelly was.

By the time we had scavenged, communed with fish and eaten lunch, we were ready for an immersion in Medieval Times. That adventure takes place in what passes for an 11th-century European castle complete with armor, coats of arms and other ersatz artifacts.

The performance began with a presentation of falconry that was both entertaining and educational. The demonstration of dressage by magnificent horses that followed was as graceful as a human ballet.

Then came the highlight — a jousting tournament by knights, each of whom was loudly cheered on by supporters in the audience. The Black & White Knight was introduced as "humble in prayer, loyal in service and in battle invincible," while the Yellow Knight "fights like a lion uncaged."

The day ended with dinner and four sleepy but happy travelers turning in for what we agreed was a well-deserved rest.

Day Two: When the girls didn't answer our morning knock on their hotel room door, we used our grandparents' logic and headed for the swimming pool. Not surprisingly they were there, cavorting in the water.

After breakfast we headed for an establishment that enveloped us in yet another world of wonder. We were surrounded by paperweights and pumpkins, fruits and flowers and a seemingly endless variety of objects in a vast array of colors — all made of glass.

McFadden Art Glass is a combination gallery and workshop that offers classes for serious creators and drop-by opportunities for one-timers. After admiring the objects on display, the girls selected items they wished to make. Prices for smaller objects are in the $20 to $65 range. Working with Sean — the very helpful, pleasant and, Mollie and Ingrid agreed, cute assistant — turned out to be a highlight of the weekend. With his guidance, our charges fashioned the items they had selected to take home as tangible tokens of the trip.

Colors of a different kind greeted us at the Monster Mini Golf Course, which offers a new twist on a popular pastime. The indoor layout is bathed in black light in which a multitude of monsters glow as they move, talk and entertain, making who wins the game unimportant.

The weekend was supposed to end by playing paintball, but that was canceled because the girls weren't wearing long pants to soften the splatter of dye-filled pellets. Fortunately, a nearby go-kart track provided an exciting finale to the festivities.

Any worries about the success of a weekend outing so close to home dissipated during the drive back as the girls excitedly recounted the experience. Ingrid voiced pleasure that in addition to being fun, the scavenger hunt "also taught us some history." Mollie's summary supported the theory that we had set out to prove: "I didn't know there are so many interesting things to see do so close to home."

We think that we're on to something! 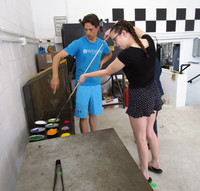 The author's granddaughter, Mollie, tries her hand at glass-blowing on a trip to Baltimore. Photo courtesy of Victor Block. 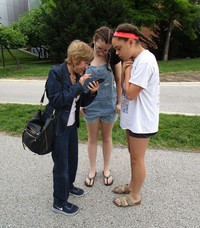