An Unforgettable Time in the Real Jordan

The year was 1977 and I was 25, unencumbered, and thanks to my newly earned accounting degree, Bell Helicopter hired me, along with other Americans, to live in Iran and teach the shah's military how to manage their prodigious helicopter fleet. My stay was abruptly curtailed when the Iranian Revolution erupted in late 1978 and forced us expats to leave.

With no reason to rush home I pocketed my company's airline voucher and set off on a journey of discovery around the Middle East. I went to Jordan on a whim, after another traveler in Cairo said, "You should go to Jordan. It's safe, there's lots to see, and the flight only costs $50." I bought a one-way ticket from Cairo to Amman, Jordan's capital, where I relished my magic-carpet ride into the world of Jordanian culture and history.

My first impressions were shaped by the city's wide, clean streets lined with two-story, cream-colored buildings, constructed of chiseled stone blocks such as I had seldom seen. I found a reasonably priced hotel, deposited my belongings and set out to explore the city.

My first lesson in Arab hospitality transpired as I asked a man the way to the post office and he insisted on leading me all the way there. After mailing my letters, I was surprised to find him still waiting for me. In his broken English, Abdul Fatah introduced himself and inquired: "Where are you from? Where are you going? Who are you traveling with?" When I explained that I was traveling alone and I had just arrived in Jordan, he responded, "You must stay with our family. We can come pick you up this afternoon."

I presented my friend's proposal to the hotel manager, who endorsed the idea, saying, "You do not have to worry. This is our custom." Then I asked a nearby policeman the same question, to which he replied: "It is safe. This is our custom." Based on this feedback, I decided to accept Fatah's offer.

At 4 p.m. he strode into the lobby, helped me carry my few belongings to the car and introduced me to his uncle, Ibrahim, a local merchant who sold traditional Arab headdresses (called keffiyeh) in his downtown shop.

A half-hour later we reached As Salt, a small town tucked among rocky hills west of the capital. Ibrahim's modest single- story hillside home, like all the homes I saw nearby, consisted of a common area for eating on cushions on the floor adjacent to the small kitchen, a small bathroom with no shower or bathtub (I bathed in a big metal tub carried to the courtyard with warm buckets of water poured over me), a couple of bedrooms —including a private room for me — a visitor's room by the entry furnished with a dozen or so chairs for guests, and a courtyard hidden from the street by a concrete-block wall.

Ibrahim, the family patriarch, presented his wife and five young children; his brother, Awad, an English teacher; and of course Abdul Fatah, his nephew. Their neighbor, Ahmed, encouraged me to visit his home for tea and conversations about life in Jordan. Thus began my unforgettable monthlong stay in As Salt.

What I remember most about my stay was the incredible amount of socializing that characterized their society. Every day a different friend or relative insisted on meeting me and hosting us for lunch or dinner, followed invariably by a tea- or coffee-based social session in the chair-filled visitors' room. The host brought out his family's traditional, highly decorated coffee pot with its distinctive curved spout from which strong Arab coffee was poured with great ceremony into each guest's small demitasse cup. No women ever presented themselves during our social visits; this was clearly a male-oriented culture.

Occasionally I would excuse myself so I could spend a half-hour alone in my room, writing letters and reflecting on the incredible good fortune that had allowed me to experience this never-to-be-repeated cultural immersion. Whenever I tried to offer my hosts money for my expenses, they always frowned and said, "You are our guest. There is no thanks for duty."

From time to time I took a break to see as much as possible of Jordan. Hitchhiking was an acceptable and safe means of getting around, so I would take a bus or taxi to the edge of town, stand by the highway and within minutes a car would lurch to a halt in order to pick me up.

I managed to visit most of the must-see places in Jordan: the Roman ruins of Jerash, the castles at Kerak and Asraq, the Dead Sea, the Red Sea port city Aqaba, the fabled pink city Petra (that my mother had told me about when I was child), and Wadi Rum, the desert staging point for Lawrence of Arabia's World War I attack on Turkish-held Aqaba (my mother was a Lawrence scholar, so this place held extra meaning for me).

Eventually the time came when I was ready to move on. By a stroke of luck, I had been able to drink deeply from the well of Jordanian hospitality. Never before or since have I felt like such an honored guest, for which I remain grateful.

A visit to Jordan must include a visit to Jerash to see the Roman ruins. Photo courtesy of www.hansentravel.org. 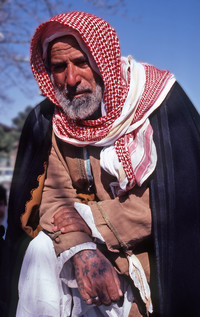