There's no denying that Grenada, like other Caribbean islands, has the requisite magnificent white-sand beaches lapped by crystal-clear waters. Or that the modest pastel-painted houses in which most people live provide a storybook setting.

But the Isle of Spice, as it is known, also boasts a unique, elusive quality that sets it apart from other islands in the region. This becomes clear during a drive along winding roads that climb into the rugged mountains. It springs from the smiles and giggles of children washing their hair beneath a spigot outside their home. And it results from the aroma of spices that permeates the island.

A visit to Grenada provides as much an inversion of a lifestyle as an introduction to a destination. More than the beautiful beaches and picture-perfect towns, the most memorable experiences involve interaction with the residents of this often-overlooked dot of land on the Caribbean map.

Grenada's geography and history fit naturally into the theme. Measuring about 12 by 21 miles, the island is large enough to offer diversions and diversity, yet small enough so that visitors can take in all there is to do and see within a short drive. The major historical event of interest to Americans was when the peacekeeping force restored democracy to the island in 1983 following a Marxist-inspired takeover. The military intervention, which was led by U.S. troops, is recalled with gratitude by Grenadians.

Tangible evidence of this chapter of history is visible at an old airport near the northeast shore. The skeletons of a small Soviet airplane and larger Cuban airliner, both riddled by bullet holes, lie rusting on a runway.

A hand-painted message on a small cinderblock building that overlooks a busy intersection is straightforward: "Thank you USA for liberating us."

Previous visitors to Grenada were not always so welcome. The fierce Carib Indians, who dominated the island for almost 1,000 years, drove out early British and French settlers during the 17th century. After a French force overcame the Caribs, the island remained under France's control until 1762, when it was captured by the British.

After sugar cane was introduced in the 18th century, slaves were brought from Africa to work at the plantations. The abolition of slavery in 1834 coincided with the introduction of Indonesian nutmeg to the island, and today nutmeg, cocoa and bananas are the island's major agricultural exports. Cinnamon, cloves, ginger and other spices also are grown by small landowners.

The Welcome Wagon-like greeting that awaits visitors translates into many encounters with locals. Outside the nutmeg plant in the town of Gouyave (pronounced Gwave) I was immersed in a typical island scene. A goat strolled by, ignored by a handful of chickens that scratched in the dirt. A sow munched on a banana skin as her litter drank their lunch.

Spotting several street vendors hawking their wares directly beneath a "No vendors allowed here" sign, I strolled over to examine the trinkets on their tiny makeshift tables. My inquiries about prices led to a discussion of my impressions of Grenada and an invitation to lunch at the home of a grandmotherly woman. Unfortunately my schedule prevented me from accepting the offer.

Similar incidents repeated during my stay provided the most vivid and pleasant memories of Grenada. Family life comes outdoors in scenes like children bathing beneath a sidewalk spigot and women doing their wash in a clear running stream. Men playing dominoes slap their tiles on the table in a noisy, triumphant display of victory. Much quieter are wayside barbers plying their trade at rickety chairs in the shade of a palm tree.

On the hills and mountains that run down the center of the island like a spine, men and women tend gardens planted on terrain so steep it's a wonder they can stand. Yet some manage to offer a friendly wave as they weed and water their cabbages, peppers and spinachlike callaloo.

Sightseeing in Grenada provides other opportunities to interact with residents and learn about their history. The capital, St. Georges, where about a third of the island's 109,000 people live, is one of the most picturesque towns in a part of the world where "picturesque" is commonplace. Historic forts overlook the scene, and houses decorated with wrought-iron balconies and red-tile roofs cling to hillsides. Cobbled streets lead to the Carenage, a horseshoe-shaped thoroughfare that runs around the deep harbor in the heart of the small city.

On Market Square, people gather around umbrella-shaded stalls to sell handicrafts, spices, fruits and vegetables, including some I did not recognize. This small space has played an important part in Grenada's history since 1791, first as the site of a slave market and setting for public executions, and more recently as a bustling center for commerce and socializing.

Each of the other towns has its own unique appeals. In Grenville, a miniscule market behind the courthouse comes alive each Saturday. Gouyave has a nutmeg station and a thriving fishing industry. It's known as "the town that never sleeps," with rum shops and the sounds of music filling the streets on most nights. Marquis, another small fishing community, is a good place to buy hats, mats and other items woven from long, slender pandanus grass leaves.

Outside the towns, visitors find an enticing volcanic island creased by a ridge of mountains and extinct craters. The Grand Etang Reserve encompasses a crater lake surrounded by a dense forest. Several waterfalls add to its appeal.

Those who prefer ocean water find 45 beaches scattered about the island. The more inviting stretches of sand are strung out along the protected west coast. Surfers prefer the waves off the windier, choppier Atlantic shoreline.

The two-mile-long white-sand beach that skirts Grand Anse Bay is considered one of the best in the Caribbean. Those seeking solitude head for smaller beaches set in secluded little coves.

Along with the wide variety of activities and some of Mother Nature's most magnificent handiworks, it is the people of Grenada that provide the most inviting aspect of a visit there. 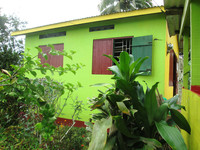 Colorful buildings and homes greet visitors to the island of Grenada. Photo courtesy of Victor Block.