Houston is one of America's most surprising cities. Fourth in U.S. population and propelled by petroleum firms that spark its economy, Houston is also a major hospital and medical research center.

The city is best visited during the shoulder seasons outside of the hottest days of late spring and summer. Then, when walking is a comfortable option, a good place to start is Discovery Green, a conversion of former commercial space and parking lots in front of the George Brown Convention Center. It features spurting water jets through which kids love to dart as well as a 1985 signature Jean Dubuffet sculpture that blends intriguing eye appeal and clever design.

It's also possible to saunter past Minute Maid Park (originally called Enron Field) that's home of the Houston Astros. Thanks to a retractable roof, rainouts and sitting through sweltering ballgames are things of the past.

Whatever the weather, one possibility is to have a comfortable walk in an intriguing six-mile-long pedestrian tunnel system that coolly connects many midtown office towers during weekday business hours.

Sports fans will usually find something of interest in Houston. Beyond the Astros there's the NFL Houston Texans and NBA Rockets. The Texans' NRG Stadium, which hosted the 2016 NCAA college basketball championship, will also be the site of the Feb. 5, 2017, Super Bowl

Then there is the Museum District, a quick and easy light-rail ride south. It is home to several world-class offerings, including the Museum of Fine Arts, Houston, and the Menil Collection.

The Museum of Fine Arts is one of the United States' largest. Collection highlights include European offerings from the Impressionists to the 1940s, extensive Greek and Egyptian pieces, and works from Asia that include a lovely grouping of Islamic pieces. The sculpture garden boasts several works by Auguste Rodin.

A short walk away is the Rothko Chapel, a starkly plain building that houses a group of the artist's signature black paintings. Other leading museums include the Houston Museum of Natural Science and Houston's Holocaust Museum.

For a complete change of pace, my wife and I headed to Sam Houston Park, where structures from Houston and nearby have been gathered. Operated by the park's Heritage Society, this is a grouping of one mansion originally sited here plus a church and other homes relocated here for protection and extensive restoration. Exploring these properties is a fascinating counterpoint to modern-day Houston, where few early buildings still stand.

Some points of interest require wheels. That's certainly true of the Montrose district, home to many outstanding restaurants. Two of the best are Underbelly and Hugo's, both on Westheimer Boulevard, a half-hour's ride from downtown.

Underbelly is wildly clever and unpredictable. The chef loves to combine ingredients and concepts in ways that initially might appear odd. But on the plate they unfailingly turn out to be winners. Hugo's is a superb Mexican eatery where the menu seems dedicated to banishing all thoughts of cliched offerings.

The Johnson Space Center, 29 miles from downtown Houston and overseen by Space Center Houston, is another definite must. Here visitors can handle a genuine moon rock and walk through a shuttle replica mounted atop a 747 aircraft especially designed to carry it. They can also view actual Mercury, Gemini and Apollo capsules that ventured into space and explore Rocket Park. This is where giant multistage rockets that propelled humans and dozens of scientific exploration flights now lie at rest. Mission Control offers hours of space-related films and three live shows that zero in on the past, present and future of space exploration. Families can easily spend a day here.

Just 50 miles from Houston is Galveston, once one of America's leading cities. Today it is a pleasant seaside town that draws significant traffic to its cruise passenger terminal.

Soon after the 1836 Battle of San Jacinto in which Texas secured its independence from Mexico, Galveston started its rapid growth. Via its port, built earlier under Mexican rule, the city grew to become of the largest U.S. ports, even rivaling New York City.

Masses of immigrants flowed in and international trade flourished until the great hurricane of Sept. 8, 1900. On that day some 8,000 people were killed and the port and many businesses were wrecked. As the new century dawned, Galveston slowly recovered. But at the same time the then-smaller city of Houston took over much of Galveston's businesses. This launched the growth that led to Houston's evolution into the powerhouse it is today.

Now, although Galveston is home to fewer than 50,000 people, the city retains many appealing reasons to visit. For starters, it has a sizable corps of magnificent 19th-century homes, many of which survived the hurricane. Via organized architecture tours or just roaming the streets, Galveston's collection of Victorian, Queen Anne, Greek Revival and other elegantly styled dwellings are among America's best.

An outstanding example is the 1892 Bishop's Palace. Originally built for a railroad magnate, it survived the hurricane and later served as the residence for the bishop who headed Galveston's Catholic Church. The beautifully carved wood interior and stained glass are noteworthy, as are the plumbing and other workings of a grand 19th-century residence.

Then there is the Bryan Museum, a former orphanage that's home to one man's extraordinary collection of Southwestern — particularly Texas —memorabilia. Exhibits focus on the days when Indians and later the Spanish dominated the region, the battles for independence and the cowboy era. Displays include saddles, a collection of works by Texan painters and a description of the extensive role played by African-American cowboys. Many were former slaves who, after the Civil War, chose to make unfettered new lives in the West.

It's also great fun to explore the historic Downtown Strand Seaport District that features iron-front buildings plus boutiques, art galleries and restaurants. On Post Office Street is the elegant 1894 Opera House, which is open for tours. An even better way to experience the structure is to attend a concert or other performance.

Other Galveston draws include the Ocean Star Offshore Drilling Rig and Museum, the 1877 tall ship ELISSA, a harbor tour and some of the tree trunks that were submerged and killed by saltwater tidal surge caused by Hurricane Ike in 2008. Many were later carved by dedicated artists into intriguing wooden statues.

There's also a host of attractions at Pier 21, such as a harbor cruise, the Texas Seaport Museum and a fascinating movie with actual footage taken during and after the deadly 1900 hurricane.

Hotel Zaza is stylish, comfortable and right across the street from the Museum of Art, Houston: www.hotlelzaza.com.

Hotel Icon is a nicely restored property and a great base for center-city exploration: www.hotelicon.com.

The Underbelly Restaurant is at 1100 Westheimer Road: www.underbellyhouston.com.

Gaido's Seafood Restaurant is across the road from the Gulf of Mexico: www.gaidos.com. 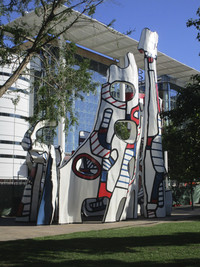 A shuttle replica atop the special 747 that transported the original is on view at the Johnson Space Center in Houston. Photo courtesy of Barbara Selwitz. 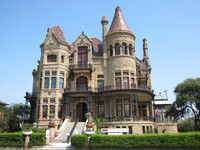 The Bishop's Palace in Galveston, Texas, is a must for architecture devotees. Photo courtesy of Barbara Selwitz.