Castles, Cathedrals, Christmas Markets and Fine Companions on the Rhine

Traveling by myself on a December Viking river cruise down the Rhine was one of the most convivial adventures I have ever experienced. We floated quietly and seamlessly down "Europe's King River," disembarking to wander through castles, Christmas markets and classic cathedrals and to amble through picture-perfect riverfront cities whose half-timbered homes were models for the collectible ceramic Christmas villages — all while enjoying new friends over gourmet meals and world-class wines in our beautiful home away from home.

It may have been the most relaxing way to tour one of Europe's most fascinating regions. From Amsterdam to Basel, we cruised down the placid river, stopping at the fascinating ports of Cologne, Rudesheim, Heidelberg, Strasbourg and Colmar, where expert guides showed us why these cities are appealing anytime. And we never had to pack between ports.

December is when this region of Europe becomes even more magical because traditional Christmas markets take over historic city squares to sell seasonal gifts and local foods. Sipping gluhwein (mulled wine with brandy) and munching on various versions of fried potatoes, including my favorite, reibekuchen (potato pancakes), we navigated the crowds to find perfect presents.

But the camaraderie onboard Viking Kara may have been the best gift to all of us gathered during our eight-day cruise.

"I admit that I was concerned at first about the open-seating policy and the structure of the meals," Dr. Ben Bratcher, a dentist from Texas who was celebrating his 25th wedding anniversary with his wife, Julie, told me later. "I am not a veteran cruiser, so my expectations were based on what I had heard from ocean cruises. I was quickly corrected and thoroughly enjoyed the way (Viking does) it. We met several nice couples and knew instantly that we would be seeing more of them."

Our fellow travelers on this particular Viking cruise ranged in age from their 20s to their 80s, with groups of friends traveling together, couples celebrating important milestones, cohorts toasting various birthdays, and mothers and daughters and mothers and sons making memories together. A few of us braved the experience on our own, and we were each quickly adopted by welcoming new friends.

We had all chosen this winter adventure down the Rhine, Germany's longest river and the second-longest — next to the Danube — in central and western Europe, to shop at the many different Christmas markets. These wintertime crafts and food festivals originated in this region of Europe, and fans of the holiday will find more collectible keepsakes than they ever imagined.

Our home base, Viking Kara, is one of 64 longships built by the U.S.-based company specifically to cruise Europe's many rivers. While today there are several river-cruising operators, Viking River Cruises continues to garner the most accolades. For five consecutive years — 2011-2015 — Viking has earned "Best River Cruise Line," "Best New River Ships" and "Best River Cruise Itineraries" from the international team of Cruise Critic editors.

"In an expanding river market, Viking continues to reign," says Cruise Critic. Travel and Leisure also awarded Viking the highest score of all river and ocean cruise lines in that magazine's annual World's Best List in 2015.

From the moment I received my impressive box of travel documents prior to my first step aboard Viking Kara, I was delighted with the details. My spacious veranda stateroom with its open-air balcony and remarkably commodious bathroom was a true comfort.

Meals were served at the same time for breakfast, lunch and dinner in The Restaurant, where panoramic windows kept the river in constant view. These seatings paved the way for those new friendships, where tables for four to eight invited mingling. And menus typically offered a few regional specialties, while keeping certain favorites always available. The food was fabulous at every meal.

The Aquavit Terrace was a quieter, more intimate option anytime anyone wanted to steal away from the lively restaurant scene. Lunches here were more casual buffets, offering sandwiches and salads and sometimes hamburgers and french fries.

We often cruised at night, waking to a new port each morning. We'd disembark, board buses for short drives to the cities of note along the route, then follow a guide on walking tours before being released from the group to wander on our own. Two girlfriends traveling together from Florida told me they were disappointed by all the bus rides and group tours. But there seemed no better way to reach Cologne or Heidelberg or Strasbourg when docking on the river, and if you didn't want to follow the guide, you could be on your own in the cities in no time for plenty of shopping at those Christmas markets.

But the guides were all great, and I learned fascinating tidbits when I followed them. In Cologne, Marion Dijkman guided us through the historic core of her beloved city's old town, centered by the magnificent Cologne Cathedral, regarded as a masterwork of medieval Gothic architecture.

"It took 600 years to build," she told us through our radio earpieces as we navigated our way through the crowds. "It was started in 1248 to house the reliquary of the three kings" — their supposed mortal remains brought back as a victor's spoils of war with Milan in 1164. "It remains the largest shrine of the Middle Ages today," she said.

Indeed, Cologne Cathedral is said to be the most visited landmark in Germany, drawing 20,000 visitors every day. In Heidelberg, Susanne Hofer von Lobenstein led us to the impressive Heidelberg Castle, a dominant landmark on the hill overlooking the charming city. Though abandoned more than 300 years ago, the castle still commands fantastic views of the Neckar Valley and its river that flows into the Rhine.

"The Rhine, Neckar and Danube were very important and a main way of travel during medieval times," she told us. "The oldest Jewish settlements are also along these rivers."

She pointed out some of the brass plaques in front of historic homes in the city center that once were homes to Jewish residents before World War II.

Strasbourg proved a favorite for many of us — it is unfailingly lovely with its half-timbered houses lining canals punctuated by weeping willows. It has its own imposing Cathedral de Notre Dame that soars over the old town's center, at 426 feet the highest medieval building in Europe. The town is filled with antique shops, artisans and craftspeople as well as beer-makers and purveyors of tarte flambe — Strasbourg's version of a very thin-crusted pizza.

And finally the medieval Alsatian village of Colmar captured our imaginations.

"Colmar is an intact medieval town," our guide, Peter, told us. "Ruins and houses here date back to the 12th, 13th, 14th and 15th centuries, largely saved from World War II destruction." It is home to the Unterlinden Museum, "the second most visited site in France, after the Louvre, for its 16th-century altar piece," Peter said. On our way back home on the bus, he serenaded us on his accordion with several lovely French tunes.

"I am usually a sound critical thinker and in all honesty I have thought about it a lot and my Mum feels the same way, but we can hardly find anything we didn't like about our week with Viking," wrote Darren de Warren, one of my new friends from the ship whom I asked to weigh in on our experience.

"I really liked the contrast of the smart casual cruise and the relaxed, friendly, efficient staff in the context of deluxe cruising. It was a real paradox but it really worked," he wrote.

"I was amazed at the silence of the engines, the mix of activity and non-activity on different days and the absence of on-board hoopla. Just the piano each evening, a cocktail and a chat before dinner finished great days."

De Warren, "pushing 50," was traveling with his mother, Pam, 70, both from Brisbane, Australia.

"Having ocean-cruised with her before, there was no comparison to the flexibility we had to do our own thing," he wrote.

Bratcher also commented on the attentiveness of the crew.

"Obviously the crew gets the majority of the credit for our experience," he said. "They really can make or break an experience."

He noted that the highly social nature of our cruise may not be for everyone.

"I saw a few people who seemed more inclined to stay by themselves," he said. There were a couple of chances for dinners on our own in Rudesheim and Speyer, and the on-board concierge made that an easy choice. But for many of us, the experience was thoroughly enhanced because of new friends.

And I found the best holiday presents ever.

Viking River Cruises: The eight-day cruise down the Rhine, including all meals and included excursions, begins at $1,999 per person: www.vikingrivercruises.com. 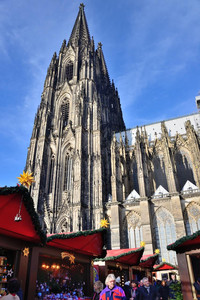 The amazing Cologne Cathedral, one of the most visited landmarks in Germany, towers over a Christmas market. Photo courtesy of Priscilla Lister. 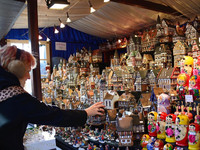 . These ceramic collectibles from a Cologne Christmas market open for inserting a candle to light the little windows. Photo courtesy of Priscilla Lister.