Birds, Bees, Flowers and Frittatas at the Silver Star Inn

A charm of ruby-throated hummingbirds buzzed at four feeders as photographer Tish Lafferty and I ate brunch on the front porch of the rustic Silver Star B&B Inn near Spring Green, Wisconsin.

Nearly two dozen of the iridescent birds delighted us as they zigged and zagged through the air, sometimes landing to dip their long, slender beaks into the sugar water before zipping off to another feeder.

The tiny birds' dance complemented our meal of frittata, country-fried potatoes and a medley of fruit, beautifully presented by innkeeper Elise Dallman, who has owned the 25-year-old inn with her husband, Kevin, for the past three years.

The 10-bedroom Silver Star perches on 70 acres, deep in the wrinkled and heavily forested hills of the Driftless Area in southwestern Wisconsin, with a dozen acres dedicated to a federal program promoting monarch butterflies and other winged pollinators.

Consistent within the expansive grounds, the 7,200-square-foot log cabin could have been plucked out of Montana to serve as an impressive backdrop for Jim Harrison's 1978 novella "Legends of the Fall," which was later made into a movie of the same name starring Brad Pitt, Anthony Hopkins and Aidan Quinn.

The Silver Star was an ideal first getaway from our homes in Madison, Wisconsin — roughly 37 miles to the east — since the outbreak of the coronavirus pandemic in early March. After nearly three months of quasi-quarantining, we were ready to do some adventuring that was within easy driving distance.

Our room — complete with a four-post mahogany queen bed, patchwork quilt, and homemade cookies — had an avian theme and was aptly named "Hummingbird Haven."

Another is called "Birdseye View," while a third is christened "Garden View" and overlooks the raised-bed, geometric gardens at the front of the lodge, abundant with flowers, vegetables and herbs.

The Silver Star was the creation of Jean Langer, an artist and photographer, who designed the inn and had it built during the winter of 1994-95. Once the Dallmans had successfully launched their third son to the Pacific Northwest after raising their children in suburban Milwaukee the couple decided it was time for a change from corporate life.

"We had a heart-to-heart about what we wanted the rest of our working lives to look like," Elise said. "We went over the things that we enjoy and what we like to do with our time. For me, it came down to gardening, cooking and entertaining. For Kevin it was tinkering on the house and working with his hands."

When they discovered the Silver Star, they found the shared dream where they could expand on their individual natural talents. They took over the B&B in 2017.

While some of Langer's artistic influence remains, the Dallmans have made the Silver Star their own.

Elise, who worked for a brokerage company, is in charge of gardens, chickens (more on them later) and kitchen. Kevin, a former partner in an accounting firm, maintains the building and the property. One of his first purchases was a tractor with a brush-cutter.

"A big log cabin is like a Harley-Davidson of homes," he said. "You always have to tinker with it to get it right. I like to say that it is 'perfectly imperfect.' It literally breathes, and there is always caulking and chinking to fix and maintain."

The Silver Star has several miles of trails, and the Dallmans took us on a stroll after brunch to a bluff above the inn and then on to a 12-acre meadow where thousands of flowers attract butterflies, bees and other pollinators.

But first Elise introduced us to her "girls," a dozen or so chickens that live in two coops, one of which is a miniature version of the log-cabin inn. Handsome birds — with names like Della, Ginger, Delphine, Tiger and Moca — they produce plenty of eggs for breakfast omelets, quiches and frittatas.

"They all have personalities," she said.

The stroll to the top of the bluff was easy and led to a large meadow bordered by mature oak trees. To the west was a barn and a silo. But for the most part the vista was filled with thousands of acres of forest, an ideal spot to watch the sunset.

Then it was on to the 12-acre pollinator meadow, which is technically part of a "Conservation Reserve Program." It was burned off initially to control invasive species, thistles and other unwanted plants. Then the Dallmans seeded it with milkweed, prairie clover, bergamot, black-eyed Susans, New England asters, coreopsis and goldenrod and others.

"We've seen an amazing revival of honey and bumblebees," Kevin said. "More than I'd ever seen before."

The inn is near Taliesen, the 800-acre estate of famed architect Frank Lloyd Wright, which includes his 37,000-square-foot home, studio and school. It is a National Historic Landmark and part of a UNESCO World Heritage Site: www.taliesinpreservation.org. 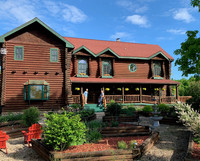 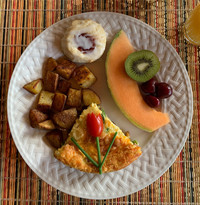 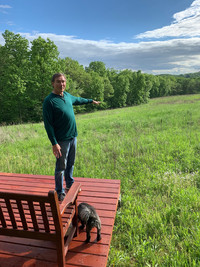 Kevin Dallman gestures toward the meadow that attracts birds and bees to the Silver Star Inn near Spring Green, Wisconsin. Photo courtesy of Brian Clark.