Pandaw's Vietnam Cruise Is Unlike Any Other

On Pandaw's Halong Bay and Red River Cruise I truly understood the quote, usually attributed to Mohammed, "Don't tell me how educated you are, tell me how much you have traveled."

I have watched movies, documentaries and read books about Vietnam, but only when I walked down the narrow road of a small riverside Vietnamese village and could hear the pounding of metal and see the sparks fly did I really feel the pulse of the Vietnamese people. Small villages along the Red River tend to focus on making one main item, be it knives, noodles, bonsai trees, wood objects, bamboo products or rice paddy hats. They make the items the way they have for generations not just for tourists.

In Tien Du village the ladies were making paddy hats called "Non La." They start with dried palm leaves that are flattened and sewn around a frame. I was impressed by an 80-year-old sitting on a small block of wood, threading a needle and sewing on the leaves. Each lady specializes in one step of the process. They make about $1 a day.

Besides learning about how products are made in the traditional manner I also learned more about the culture. During a visit to Hung Lo Temple a local group performed a traditional folk song, "Hat Xoan." "Hat Xoan" is seeking recognition as a world cultural heritage to be preserved. Xoan singing is believed to have been developed during the reign of the Hung kings (2890 to 250 B.C.). It has been passed on down through certain families for generations.

Water puppets and Vietnam are synonymous. The shows in Hanoi's puppet theater are good, but seeing the show in Thanh Ha village was truly special. Water puppetry dates back to the 11th century, when it originated in the Red River Delta villages like Thanh Ha. The puppeteers stand in waist-deep water hidden by a screen. They control the lacquered wooden puppets by unseen bamboo rods so that the puppets appear to dance on water accompanied by drums, cymbals and gongs. The puppet vignettes relate traditional folktales, complete with a fire-breathing dragon plus day-to-day activities such as farming and fishing. The show was scheduled for Pandaw guests, but it drew the local people, too, especially the children who took delight in the unexpected free performance.

At the end of one of the shore trips we were entertained on the wharf by a lion dance, an integral part of the Vietnamese New Year's celebration. The Pandaw RV Angkor crew thinks of everything. They brought chairs from the vessel so we could enjoy the show in comfort. The lions, two people in one costume, were incredibly agile as they performed, especially when the lions, one person on the shoulders of the other, had to jump to get the lettuce (representing money) held high above. It is a traditional part of the dance as it portends good luck for the coming year.

The cruise also included wonderful shore trips that showed off the area's scenery. The crew had arranged small boats to take us to Stork Island, where the flora and fauna are protected. One morning we were bussed past green rice paddies to the area called Halong Bay on Land, where small wooden boats awaited. For the next hour a woman rowed, using her feet, along the stream that passed by towering karst formations and through two caves to a pondlike area, where we stopped. I thought it was to give the rower a rest; not so, it was so she could give us a back massage. The cruise around Halong Bay was magical, and once again the Pandaw crew arranged for a small boat trip in the area through a cave and to a place where we were saw several of the endangered lemurs.

When we returned to the RV Angkor after a shore trip staff members were waiting: one with a refreshing lemongrass scented towel, another with a refreshing fruit drink, and one to take our shoes and clean them. The service was impeccable, and accommodations, staff and meals were five-star while attire was casual.

Onboard presentations also entertained us: a cooking demonstration, musical performances, cultural events and in the evening movies set in Vietnam. Before dinner one of the crew members explained the next day's tour.

Pandaw guests get to see and experience things the average tourist does not. As well as being the pioneer in Red River cruises they also offer cruises in Myanmar, Cambodia and Laos.

The company has revived Burma's Old Irrawaddy Flotilla Co. The RV Angkor, like most of Pandaw's vessels, is hand-crafted and traditional in design but with all the modern conveniences. Accommodations are large, and there is even Internet connection. The cruise is all-inclusive, including gratuities. The average number of passengers is usually about 20 (maximum capacity is 32), most of whom are well-traveled. Most passengers on our cruise had been on more than one Pandaw sailing, and it was the fifth trip for one couple. There's no better recommendation than that!

For more information on any of Pandaw's expeditions, visit www.pandaw.com or call 844-361-6281, toll-free from North America. Pandaw also offers pre- and post-trip extensions. You'll need a visa to visit Vietnam. 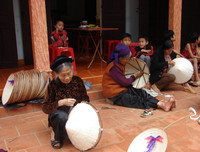 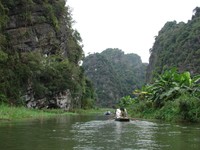 A Vietnamese boy performs a folk song in the "Hat Xoan" tradition at the temple in Hung Lo. Photo courtesy of Sandra Scott. 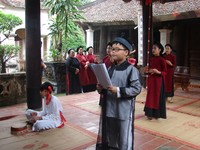 Passengers from the Pandaw RV Angkor ride in boats rowed by local Vietnamese women with their feet in an area called Halong Bay on Land. Photo courtesy of Sandra Scott.