See the World's Most Spectacular Sights by Train

For some people taking a train is just a way of traveling from one place to another. For others, the trip itself is the major attraction. They're interested in the ride, the scenery outside and in some cases the activities available to passengers. Here are several outstanding rail trips that will tempt you to get on board all around the country and the world.

Some train routes in the United States offer inviting scenic attractions. The California Zephyr between Chicago and San Francisco climbs both the Rocky and snow-capped Sierra Nevada mountains. The Adirondack train is named for the mountain range it passes, and it also rolls through New York's Hudson Valley wine country, where grapes have been grown and wine produced since 1677.

A major attraction for passengers on Spain's Al Andalus train is that country's rich cuisine. As they travel to inviting destinations, riders enjoy dishes that are popular in each area, accompanied by the best local wines.

Given the beauty of the soaring Alps mountains in Switzerland, it's no surprise that there's a choice of trains that introduce passengers to their splendor. The Bernina Express crosses the Alps between northern and southern Europe and offers dramatic views of towering mountains, castles and, eventually, the sun-soaked villages of Italy.

Another shorter but equally dramatic ride through the Swiss Alps is provided by the Glacier Express. Its eight-hour, 180-mile-long trips connect two famous mountain resorts and climb to a height of 6,670 feet above sea level.

Views outside change with the time of year. In summer, rolling meadows stretch to the horizon, then burst into a tapestry of color during the fall. The winter landscape is blanketed by glistening snow that gives way to a carpet of colorful flowers in spring. The setting is equally dramatic in Canada's towering Rocky Mountains. Rocky Mountaineer trains climb towering peaks and pass desertlike canyon terrain.

Oversize windows provide unobstructed views of the scenery, which changes throughout the spring-to-fall trips.

Travelers who prefer to combine activities with a train ride have a wide range of alternatives. A long list of choices is available to passengers on the Belmond Royal Scotsman. As it carries guests through the breathtaking countryside of Scotland, they may disembark to play golf in the country where the game was invented, explore beautiful country homes and gardens, and visit Scotch whiskey distilleries that offer tours and tastings.

Train experiences in Africa can include viewing animals in their natural environment. Trips aboard the Desert Express in Namibia offer game drives, cheetah and leopard viewing at a safari guest farm, and lion feeding. Another excursion explores sand dunes in the vast Namib Desert, which stretches more than 1,200 miles along Africa's Atlantic coast. Some dunes are close to 1,000 feet high.

Game-watching also is available to people who ride on Rovos Rail trains, which cross southern Africa. Excursions include safari drives, historical outings and immersion in local cultures. One game drive takes place in Hwange National Park, which is the largest game reserve in Zimbabwe and home to more than 100 mammal and 400 bird species. Another side trip visits a diamond mine museum, while a cultural presentation introduces the lifestyle of the Zulu people, one of the best-known tribal groups in Africa.

The Ffestiniog Railway, one of several "Great Little Trains of Wales," is the oldest operating railroad company in the world. It was founded in 1832 and in 1863 became the first narrow-gauge train service to introduce steam engines — two of which are still in use.

These miniature, narrow-gauge steam-driven trains chug through northern Wales at slow speeds, giving passengers an opportunity to enjoy the beauty of the passing landscape. For example, the Ffestiniog route traverses the Aberglalsyn Pass, a deep, narrow gorge that has been called the most beautiful spot in the United Kingdom, and huffs and puffs up some of the longest and steepest inclines in the country.

Even a train trip of only 11 miles can offer something special. Since 1902 the narrow-gauge Vale of Rheidol train in Wales has been transporting passengers through some of the finest scenery in Britain. As the cars makes a series of twists and turns, views outside change from open fields to ancient woodlands to rugged mountains.

In contrast with the tiny Vale of Rheidol track is the longest single-service railway in the world. The Trans-Siberian Railway covers 5,770 miles and passes through eight time zones as it connects Russia's east and west. Depending upon which itinerary they select, passengers may stop at cities along the route, including the capital of Mongolia; have a private viewing of the Kremlin; and take a class in cooking traditional Russian dishes. Among companies with which people may arrange Trans-Siberian trips is Golden Eagle Luxury Trains

The newest addition to the list of great rail trips will be the first luxury sleeper train in South America, which is scheduled to begin service in 2017. The Belmond Andean Explorer will travel along one of the highest rail routes in the world, through the Andes Mountains of Peru at altitudes reaching nearly 16,000 feet.

Passengers will visit remote villages, view the 10,725-foot-deep Cotahuasi Canyon and stop by Lake Titicaca, which has several dozen artificial floating islands on which people live.

For more information about trains around the United States: Amtrak: www.amtrak.com

For the small, narrow-gauge railways in Wales: www.greatlittletrainsofwales.co.uk

The Rocky Mountaineer takes passengers through some of the most dramatic scenery in North America. Photo courtesy of the Armstrong Group. 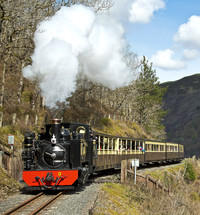 The Rheidol Railway carries visitors to Wales through 11 miles of the country's most beautiful vistas. Photo courtesy of John R. Jones.