The Best Place in Cuba Is Artsy Havana

Like many Americans, my No. 1 bucket-list pick was Cuba. Off-limits for so many years, it was surrounded by mystery. But my recent visit divulged many surprises, particularly in the arts scene.

Yes, it's a poor country. There's much unemployment. But contrary to what we've been hearing, most residents claim the country is not communistic but socialistic. The government owns most businesses but is lately encouraging some private ownership. It also provides free medical care, although individuals have difficulty buying non-prescription items.

Everyone, though, is not poor. Upscale communities exist, and I did spot a Mercedes-Benz showroom. Education is free through college for those who qualify. What I found to be the greatest surprise is that not only is the literacy rate higher than in most Caribbean nations at 99.8 percent, but sociologist Dr. Marta Nunez said that, "UNESCO claims that Cuba is one of the leaders in the world in the quality of education."

The arts are definitely encouraged. For example, when a youngster shows talent in music or fine art, he or she is placed in a special school that concentrates on that genre. There's a university for gifted athletes, as well.

The most obvious art form is architecture that spans six centuries of styles. Havana Vieques (Old Havana), a UNESCO World Heritage Site, boasts 900 historical buildings within less than a square mile that were built between 1500 and 1800. Its Plaza Vieques, dating from 1559, features buildings created in the Cuban Baroque style, sporting arched windows and colonnades, curlicued trim and balconies. The cathedral and other buildings exhibit Spanish and Moorish influences. Many are coated in candy colors of peach, turquoise and yellow.

Unfortunately, standing alongside a beautifully restored edifice might be the crumbling remains of another. Sidewalks are often cracked and broken. Most locals said that lifting the U.S. embargo will fix the infrastructure.

"UNESCO gave us training but not money," said guide Manny Perera. "However, the United States cut off UNESCO funds because Cuba recognized Palestine."

Since 2004, though, there has been retraining and improvement. Today the field is in such demand that the school of restoration claims a waiting list.

Before the political changes, some had lived in luxury. I eyeballed this lifestyle at the National Museum of Decorative Arts, housed in a 1939 palace that belonged to the Countess of Recilla of Camargo. In 1964 it opened as a museum exhibiting her collections of 17th- to 19-century furnishings and art that included works by Sevres, Lalique and Baccarat.

"Musical and dance performances are free to citizens," Perera said. "Therefore they're very popular and the people are erudite."

Unfortunately, I couldn't attend a musical or ballet performance at the magnificent Gran Teatro de La Habana. However, other opportunities presented themselves. At the Sevilla Hotel I delighted in an evening performance titled "Havana Classics." Two sopranos, a mezzo soprano and a tenor offered operatic arias and Broadway show tunes. The caliber of the singing was magnificent, which shocked some visiting spectators.

I also witnessed a different kind of performance. Cuba is not a Catholic country, we were repeatedly told, but the main religion is Afro-Cuban. Black slaves were converted to Catholicism, yet they practiced their Santeria rites alongside it. I learned about the African culture and traditions at Callejon de Hamel, where guests were treated to a colorful and exuberant medley of music and dance.

Another dance performance was available — flamenco. I thought I would pass it up since I've seen productions in Spain, Mexico and elsewhere. However, when our entire group chose to go, I joined them at Teatro Marti.

This was like no flamenco dance I'd ever witnessed. It wasn't merely the stomping of heels and clicking of castanets. The performances exhibited a dazzling balletic form. And then artistic director and star performer, Irene Rodriguez, appeared onstage. The guests who filled every theater seat rose and cheered. She executed a classic flamenco, but with such a thundering stamping of heels that her foot movements seemed faster than a hummingbird's wings in flight.

Of course no visit to Havana would be complete without an evening at the venerable Tropicana Club. Sure, it's touristy, but it must be seen to be believed. It's Vegas on steroids. It has been since 1939, and supposedly it influenced entertainment in Las Vegas. Three dozen dancers in fantastic ruffled, feathery costumes danced with ultimate energy under huge trees (female dancers are not bare-breasted but show lots of behinds). The show has been updated with lasers, multilevel stages and gymnastic feats. Guests at long tables snapped fingers and swayed to such songs such as "Cumba Cumba Cumba Cumbanchero" while sipping rum and Coca-Cola.

As for graphic arts, the Museo Bellas Artes (National Museum of Fine Arts), created in 1913, boasts more than 50,000 pieces. There's a strong focus on 18th- to 21st-century Cuban art. The artists apparently have more freedom now in portraying subjects than formerly. One example is the world-renowned Carlos Garaicoa, whose works often spotlight ruined buildings. In discussing the city's architectural gems and the sad condition of many, a museum curator, Aylet Ojeda Jeguin said, "I feel there's a beauty in the falling-apart condition: It reveals history and mystery."

Earlier European works are also displayed. The statues or portraits on buildings are not of Fidel Castro but of Che Guevarro. The law states that living persons may not be thus represented.

I discovered artistry of a different genre in the works of Jose Fuster that are reminiscent of Barcelona's Gaudi. His whimsical style in sculpture and ceramics, characterized by playful colors and simplistic figures, creeps throughout his Jaimanitas neighborhood.

Literature fans make pilgrimages beyond the city to the 1939 home of Ernest Hemingway. The Nobel and Pulitzer prize-winning author lived at Finca Vigia here for half his life — until 1960 — surrounded by 9,000 books. Hemingway often entertained American celebrities, who included Rita Gam and Grace Kelly. Among his writings here were notably "The Old Man and the Sea," "A Moveable Feast" and "Islands in the Stream." His 38-foot fishing boat, Pilar, is displayed, and his old Chrysler automobile that is currently being restored will also be exhibited.

"Havana is a museum of old cars," said Perera.

Visitors spot many examples of U.S. cars from the 1950s roaming the streets, some serving as taxis. There seemed to be a preponderance of Chevies, and the best place to spot them lined up is Prado Street.

They're mostly spotlessly preserved, albeit with air conditioning and tape decks added. But that doesn't mean no new cars are in evidence. It's just that they can't come from the United States. So many newer foreign cars run the streets, particularly those from Korea.

And those charming pictures of horses and buggies? They're tourist attractions, not used in daily life by locals.

As for culinary arts, I had pictured Havana as not yet prime time for tourists, despite knowing that tourism has been permitted from Mexico, Canada and other countries. However, I was greatly impressed with my stay at the Iberostar Hotel Parque Central, a Spanish Colonial building boasting air conditioning, elevators and wakeup calls. Its breakfast buffet for guests surpasses the most elaborate on many huge cruise ships. Dishes include luscious fresh tropical fruits, meats, fish, cheeses, made-to-order crepes and omelets, and a cornucopia of freshly baked breads and pastries.

Hotels are joint-venture projects with the government. Arguably the most famous hotel is the Hotel Nacional, dating from 1930. If it looks familiar, it's because the resort was created by the same builders as The Breakers Palm Beach, with similar Belvedere towers. In its heyday, guests included Frank Sinatra, Mickey Mantle, John Wayne, Marlon Brandon, Winston Churchill and Jesse Ventura. Meyer Lansky and other members of the American Mafia figured greatly in the country's vacationland.

Dining is available at the hotels, but a novel treat awaits at the paladares, restaurants in private homes. Our group sampled several of these eateries, which are usually upstairs with no elevators and lack air conditioning. The most charming aspect was often the collections of family photos, documents and memorabilia. But the food, as we'd been warned, was mediocre. Cuban specialties such as ropas viejas and platanos were omnipresent. (Cuban cuisine is not spicy like Mexican cuisine.) In each place I sampled, the meat was either tough or overcooked, but the mojitos were outstanding. One place stood out, however. The food at Chef Ivan Justo was the best I sampled, everything plated and garnished exquisitely. The baby rib lamb chops were tender and flavorful, while the tres leches — or three milks — was divine. It arrived in a can reminiscent of the cans of condensed milk used in its preparation.

Servers everywhere, as well as the people on the streets I roamed safely, were always helpful, cheerful and well-mannered.

"They learned recipes and techniques from each other," said his representative. Hopefully dining will improve now, adding to Cuba's charms.

Carnival Cruise Lines has been approved by the U.S. government to begin cruises to Cuba from Miami in May 2016. The line is awaiting approval from the Cuban government. 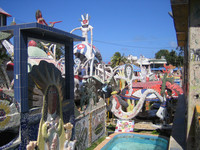 Visitors to the home and studio of Jose Fuster in Havana, Cuba, get to experience his artistic vision. Photo courtesy of Molly Arost Staub. 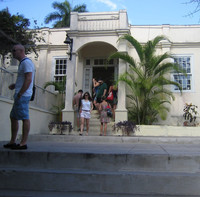 No visit to Havana, Cuba, is complete without visiting the home of Nobel and Pulitzer prize-winning author Ernest Hemingway. Photo courtesy of Molly Arost Staub.