By Kailash Maharaj and Shivana Maharaj

What's come over us? Despite a natural reticence, we can't quite help striking up a conversation with Sidi Limehouse at his Rosebank Farms on John's Island in South Carolina.

"When I was a boy all of this was undeveloped, and no matter how far away, you would talk to your neighbor," he said between spitting chewing tobacco and revealing the ultimate code of the South — hospitality.

It's not the first time we've found ourselves out of character. We had begun the trip chatting with chefs and musicians at Euphoria, the 8-year-old food and musical festival held annually in Greenville.

"We want to keep it small," said Carl Sobocinski co-founder of the event, which includes intimate concerts with Grammy award-winning songwriters such as Tim Nichols, wine seminars, restaurant tastings, dinners and chef demonstrations.

The festival has done much to highlight Greenville's burgeoning culinary scene. One weeknight we dined at the Lazy Goat, which is beautifully positioned on the banks of the Reedy River. With its antique-market decor, large solid-wood tables, mosaic blue bar flanked by a wood-burning oven and Mediterranean cuisine, it has become a local hotspot. Chelsea, my server, originally from Michigan, has been in Greenville six years.

"It's a blessing being here," she said.

Greenville has done much to reinvent itself in the last decade. Its main street, now filled with shops, restaurants, event space, arts venues and cafes was once considered, like most inner cities, a dilapidated lost cause. Due to its mild weather and jobs created by BMW, Michelin and G.E., the area has seen an influx of people and prosperity. Though it lacks many of the stereotypical symbols of Southern living, Greenville is a 21st-century city without airs or pretense. Within a few days downtown Greenville is familiar, walkable and easy: Street musicians — perhaps here for the festival — play their instruments or sing, the weekend farmers market brings out vivacious crowds and dog bowls ready with treats are placed outside many stores.

"Greenville has everything you want, like Starbucks, but it's still small enough to feel comfortable," said Athena Ferguson of Greenville Glides when we arrived for a Segway tour of the city. We were joined by a married couple from Spartanburg as we zipped through the main street and past Fluor Field (the baseball stadium), the Shoeless Joe Jackson statue and museum, the Peace Center and the Westin Poinsett. At Falls Park on the Reedy, in the middle of downtown, ducks, loons and geese swam in the catchment beneath the falls, and people jogged on Liberty Bridge or were swinging at rest areas.

Another day we visited the religious art collection at Bob Jones University Museum and Gallery, an interactive and immersive museum that is considered the largest collection of religious art in the Western Hemisphere.

To see the South Carolina countryside, we drove toward the North Carolina border past small towns, their water towers emerging above the tree line, past hand-painted signs for boiled peanuts, little strip malls, grand Victorians, gas stations and oak trees.

On the grounds of a former school, we went zip-lining with Wildwater. The rush of swinging through the tree canopy, of tandem lines and views over water was equal to the thrill of taking off from the bell tower with no landing platform in sight.

We practically floated from zip-lining to the mountains. The shadow of the Blue Ridge Mountains loomed large at Chattooga Belle Farm in Long Creek like a diorama forever receding into evaporating vapors of blue. As we sat with owner Ed Land at Belle's Bistro munching on a gorgeous apple salad and cornbread, he pointed to Rabun Bald in Georgia and turned slightly to motion toward North Carolina. Much of the fabled South was within his purview.

Formerly the largest commercial apple producer east of the Mississippi River and partly owned by Groucho Marx, the farm has become a center point for agri-tourism in the state.

"Farming is a small financial footprint. Most of the money comes from weddings," Land said of the 138-acre farm's diversified offerings, which include 18 varieties of fruit, grass-fed Angus beef, honey, an 18-hole disc golf course, a store, wine (from the region's muscadine grapes and other fruit) and plans to become the first legal moonshine distillery in the county.

Land was an Army drill sergeant and worked in the construction business before taking ownership of the farm in 2010. But he softened as he spoke about his favorite moment — the farm's first wedding with a Marine Corps officer in full military regalia.

"I loaded up at sunset to take the couple to the lake house in a 1942 military Jeep. We drove across the far hill, faced back and saw the mountains. The couple teared up. It was a precious moment that still brings tears to my eyes."

If there is a lesson from this gauzy land it is the power of its beauty.

Later we visited Happy Cow Creamery, a 100-acre dairy farm in Pelzer owned by the legendary Tom Trantham. A small shop abuts the bottling plant his wife designed, a sheepdog traipsed through the property, cows were grazing in a field and a delivery truck had just loaded the last cases of milk, which traveled only 48 feet from "teat to bottle."

The farm produces low-temperature pasteurized milk, buttermilk and butter sold onsite and at grocery stores throughout the region. Beginning in the grocery business with his father at age 12, Trantham later shifted to his dream of being a dairy farmer. In 1986, when South Carolina was the epicenter of the worst drought in a century, foreclosure loomed. The fortuitous arrival of a news crew documenting the devastation led to a surreptitious call from a fellow farmer — a Mr. Pauley of Illinois — who offered Trantham his surplus of hay. This blossomed into Trantham's spearheading the largest farmer-to-farmer event in U.S. agriculture.

"No money ever exchanged hands," he said proudly.

Later Trantham developed the renowned 12 Aprils Program, which involves chemical-free pastures and a 29-day rotation for his herd of Holstein cattle.

In contrast to the languid farms, we got an adrenaline rush at the BMW Performance Driving School. We drove five different models of cars to test their power on a course before off-roading through water, hills and turns.

Moving from upcountry down to the tidal flats of Charleston brought us finally to what South Carolina locals call "a special city." More than just part of the amorphous South, South Carolina, and Charleston especially, hold a certain mystique. Our first views of the Arthur Ravenel Jr. Bridge, palmetto-lined streets and vaunted mansions were unforgettable.

Even after we took a drenched carriage ride through the city past the battery, the market and Charleston's famous churches, the magic was not dispelled. The heartbreakingly romantic scene reached its apex at Boone Plantation, the oldest continuously operated plantation in the United States.

At Hall's Chophouse the refracted din of happy diners substantiated my impression that Charleston is one of America's great food cities. Chef Frank Lee explained this phenomenon one night when I dined at his restaurant, Slightly North of Broad (SNOB).

"The food scene in Charleston is so good because of the collaboration and cooperation between chefs. You don't see the camaraderie that you do in Charleston." WHEN YOU GO

Wildwater is the place for canopy tours (zip-lining) and rafting: www.wildwaterrafting.com.

At the Happy Cow Creamery you can tour the dairy and sample milk, buttermilk and ice cream from the farm's own herd: www.happycowcreamery.com.

Greenville Glides provides Segway tours through downtown Greenville for a glimpse into the city's history and major sites: www.greenvillesegwaytours.com.

This year's Euphoria, the annual music, food and wine festival, will be held Sept. 17-20: www.euphoriagreenville.com.

Slightly North of Broad, or SNOB, has an open kitchen and offers low-country 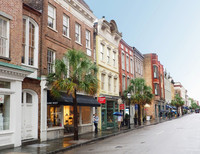 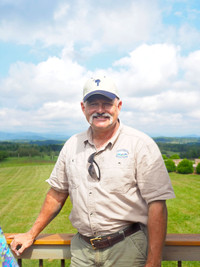