That's what some 150 residents are charged to live at the Fuggerei in Augsburg, Germany, the world's oldest charitable social housing complex. It was established in 1520 by visionary Jakob Fugger "the Rich" as low-income housing for needy Roman Catholics who were required to be upstanding citizens — and Augsburg residents for at least two years. Nearly 500 years ago they were charged one Rhenish gulden, today converted to 88 euro cents, or about $1.20. The rent has stayed the same over five centuries, and Fuggerei residents can live here (in this city of 260,000) indefinitely with no rent increase.

One of the city's most popular tourist destinations, the charming, caramel-colored Fuggerei is a living museum managed by the Fugger Family Council trust. Some 200,000 annual visitors (who, with the exception of schoolchildren, each pay 4 euros — more than four times the annual rent) tour the bucolic grounds of this historic walled complex.

The Fuggerei, built between 1514 and 1523, originally had 52 cottages with 106 apartments — "a city within a city." At one time it also had a school. Today the complex has been expanded to 67 two-story buildings with 140 apartments, each with private entrances, ranging from 500 to 700 square feet, with a modest sitting room, bedroom, kitchen and bathroom. The downstairs units have gardens, the upstairs have attics. The Fuggerei was expanded in 1880, then again in 1938. During World War II — on the night of Feb. 25-26, 1944 — it was heavily damaged; 200 residents escaped into the underground bunker (today a museum) that had been built the year before. The attractive garden complex was rebuilt in the original style and completed in 1955.

In early years residents were poor families of day laborers and candle-makers or other artisans. Today many are elderly widows. Two furnished, vacant flats are open for viewing. One at 13 Mittlere Gasse shows how it looked circa 16th century with a museum in one room that displays historic photos, films and artifacts. The other flat at Ochsengasse 51 is contemporary, with a television in the living room running a documentary film about the Fugger family (in German).

"All the flats allow for the privacy of the families or individuals who live here," pointed out my guide, Kristen Gast. "It is not a 'poor' house with less-than-adequate facilities. This is why I believe it can still function as it was conceived almost 500 years ago."

Fugger, an Augsburg native, was born into a wealthy weaving-merchant Roman Catholic family on March 6, 1459, the 10th of 11 children. An astute, savvy businessman, Fugger (with two of his brothers and nephews) expanded the family fortunes by investing in silver and copper mining, banking, the lucrative international spice trade, real estate and weaving mills.

The former theology student, a controversial wheeler-dealer (who was criticized by Martin Luther) became one of the wealthiest financiers in history, rubbing shoulders with powerful politicians, royalty and even the pope. He was financier to the Papal See, minted coins for the Vatican, helped bankroll the Swiss Guards, was the chief financial backer of the Hapsburg family, made loans to the Medicis from Florence and had a special relationship with Maximilian I, the Holy Roman Emperor. His "most dramatic act was the financing of the election of the Emperor Charles V," notes the book "Jacob Fugger the Rich" by Jacob Strieder. He "was one of the links between the Italian Renaissance and the Protestant Reformation."

Clemens Sender, a Benedictine monk and chronicler, wrote about the energetic, entrepreneur Fugger: "The pope greeted him like a dear son. The cardinals stood up in his presence — and even the non-Christians admired him greatly."

One of the more infamous residents was Dorothea Braun, who lived at Ochsengasse 52, the upper level. The first victim of early 17th-century witch-hunting in Augsburg, she was accused of sorcery by her daughter, 11, and, at age 48 was beheaded and burned.

On the crisp weekday that I strolled around noting the beautiful fountains and the well-kept gardens there were few visitors and it was eerily quiet. An elderly woman, wearing a headscarf that framed her heavily lined face leaned out of a ground-floor apartment window and eyed me with curiosity.

On the grounds is also a small shop and beer garden, and the green-shuttered apartments boast unique iron-bell pulls in different shapes — a holdover from earlier days when there wasn't good lighting and residents had to feel them to be sure they were at the right flat.

Fugger's investments dwindled over the next century, although today his descendants still own real estate, including several castles and businesses. But the charitable trust that he set up in 1520 still is doing well enough to keep the Fuggerei afloat, helping out low-income renters who became impoverished through no fault of their own.

There are seven gates at the walled Fuggerei, yet only one has a doorbell and a night watchman. And, as in medieval times, the gates are locked at night until 5 a.m.

"At 10 p.m. all the gates are closed, just like in 1523," notes guide Gast. "If Fuggerei residents need to come in after 10 p.m., they must ring the bell and the gate is opened by a doorman. It costs 50 euro cents. Or if they come in after midnight it costs 1 euro — more than the yearly rent of 88 euro cents. This regulation was probably enforced in order to protect the residents' security as well as preventing carousing. Jakob Fugger's motto, written on the church in the Fuggerei, was 'Carpe diem' or 'use the time.' He wanted to encourage discipline. Just as they still enforce this detail in Jakob Fugger's endowment letter, all of his other conditions and wishes are followed as well. For me, the Fuggerei is Jakob Fugger the Rich's greatest legacy."

A bronze bust of Fugger, cast in 2007, is in the small Fuggerei park near the bunker — a relaxing place to sit on a bench and people-watch.

Fugger didn't marry until 1498, when he was nearly 40. His wife, Sibylla Arzt, was 18 and the couple, wed 26 years and thought to be unhappy, remained childless. Toward the end of his life (he died in December 1525 at age 66; his widow quickly remarried), Fugger contemplated what would happen upon his death and, fearing purgatory, was concerned for his soul. Hence he came up with the idea of having the Fuggerei residents pray daily, not only for his soul but for the souls of his family, as well, to ensure that they all would get inside the Pearly Gates.

So to this day, besides paying for utilities, such as heat and volunteering in the gardens, as the night watchman or gatekeeper, the residents are also required to say three daily prayers for the souls of the Fuggers' dynasty and descendants: the Lord's Prayer, Hail Mary and the Apostles' Creed.

"Sometimes I forget to pray," one long-time elderly resident confessed to the Wall Street Journal. "But some days I pray extra if there's nothing good on television."

English-speaking guide Kristen Gast: [email protected] are $50 to $70 per hour, depending on tour length and size of group. Normally two-hour city walking tours. 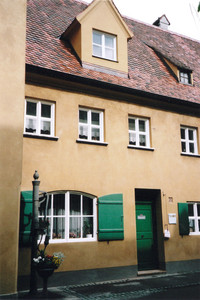 The charming cottages at the Fuggerei in Augsburg, Germany, are well kept by residents who pay an annual rent of 88 euro cents, or about $1.20. Photo courtesy of Sharon Whitley Larsen. 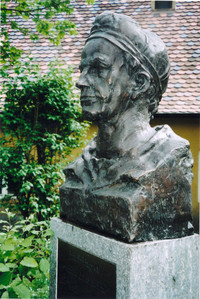 A bust of Jakob Fugger, founder of the Fuggerei nearly 500 years ago, celebrates his famous legacy of the world's oldest housing settlement. Photo courtesy of Sharon Whitley Larsen.