The road to Triunfo is in good condition and an easy drive from Cabo, Todos Santos or La Paz, where I began the 45-minute journey to this old silver-mining town in Baja California. I had heard about a restaurant called the El Triunfo Cafe that bakes great breads and crafts fantastic pizzas all in a wood-fired oven built into an old building that now has terraced seating in patios surrounded by beautiful stone walls.

So imagine my surprise when I learned that this tiny town, population 327, has a brand-new world-class museum of mining history called Ruta de Plata, brought here by Walmart.

"Well, not by Walmart exactly," said Lincoln Forte, an American who began buying up property in town a decade ago and now runs a two-room hotel called La Forteleza. "The world-class museum was built by one of the Walton daughters, Chrissy Walton."

It turns out she is a resident of La Paz who felt motivated to preserve the area's mining history and culture. The facility and interactive exhibits were designed and built by New York-based Ralph Appelbaum Associates. As one of the largest museum-exhibition design firms in the world, the company is responsible for more than 700 commissions in more than 50 countries. Walton does things first class.

She also spent many pesos saving the tallest of the town's smelting towers, called La Ramona. A rumor persists that La Ramona was designed and built by Gustave Eiffel, who did design and build in Mexico — just not here.

The museum has many interactive exhibits, including one room where visitors can detonate dynamite. The entrance fee is about $5. Children under 6 are free.

Rita Brandley of Camas, Washington, reports that her day trip to Triunfo was the highlight of her Baja vacation. She and her husband just happened upon the cafe, which is right next to the new mining museum.

"It feels like you are in Spain or Italy, opening up to a beautiful courtyard and al fresco dining. We had an amazing lunch of pulled pork sandwiches and arugula-goat cheese-sugared walnuts and cranberries salad with a mango drink. The fresh bread from the wood-fired oven was amazing. This was the best meal that we had in Mexico and well worth the drive from La Paz. It was one of the highlights of our trip!" 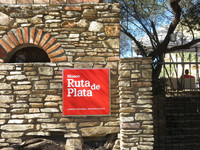 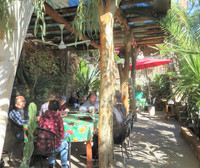 The Triunfo Cafe next to Museo Ruta de Plata in Triunfo, Baja California, Mexico, is worth the trip for its homemade bread and pizza in its wood-fired oven. Photo courtesy of Stuart Wasserman. 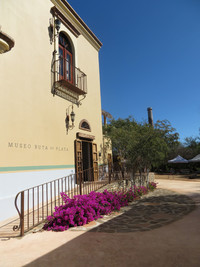 The new Ruta de Plata museum in Triunfo, Baja California, Mexico, was made possible by Crissy Walton of the Walmart family. Photo courtesy of Stuart Wasserman.