Travel experts agree that road trips will be the way pandemic-era adventurers will return to discovering the world. And if there's a destination ripe for these times, it's Columbus, Indiana, aka the "Athens of the Prairie." The unassuming Midwestern town is a mecca of modernist architecture and public art, a "natural" outdoor museum — and just what is needed while we are social distancing.

My visit here opened my eyes to the modernist design movement between the late-19th and mid-20th centuries that did away with traditional styles of architecture and ornamentation in favor of function and simplicity. Even South Korean filmmaker Kogonada's search for a film location ended when he discovered Columbus. Who would think that its simple buildings would star in his 2017 critically acclaimed directorial debut that he titled, simply, "Columbus."

Almost 100 public buildings, including schools, the library and the firehouses were constructed by elite architects — think I.M. Pei, Eliel and Eero Saarinen, Harry Weese, Skidmore Owens and Merrill, Alexander Girard, Cesar Pelli and others. A call-out for the best of the best was the vision of industrialist and philanthropist J. Irwin Miller, Columbus native and CEO of the Cummins Corp. He wanted to "rebuild" the city in the spirit of Winston Churchill's words, "We shape our buildings, afterwards our buildings shape us."

As his family's diesel engine manufacturing business grew in the 1950s, Miller realized the need to attract employees by offering an attractive town with quality schools and public services. Miller's renaissance of the city started with a program in which his foundation would pay the architect's fees only if the designer was chosen from his hand-picked list.

The rest is history.

Tours of Columbus' art and architecture begin at the beautiful Visitors Center in the heart of downtown and housed in the 1864 home of John Storey, who operated a nearby mill. The building was repurposed in 1973 to welcome visitors as Columbus became a mecca for lovers of architecture. Miller's wife, Xenia Simons Miller, oversaw the building's reincarnation, and in 1995 Pritzker Prize-winning architect Kevin Roche designed the building's seamless expansion.

Just steps outside the Visitor Center doors is the I.M. Pei-designed Cleo Rogers Memorial Library and Library Plaza — Pei's vision for the city's first public space completed in 1969. Spoiler: The brick library stars prominently in "Columbus," the powerful story about relationships between offspring and their parents. Even the dynamics of father-son architects Eliel and Eero Sarrinen, who designed some of the masterpieces around Columbus, provided inspiration for the film.

Just a few yards away, our guide turned our attention to the patinaed curves of a 20-foot-high bronze sculpture juxtaposed between the geometric lines of the library and the First Christian Church across the street. The Millers commissioned British artist Henry Moore to create a piece for the plaza. Inspired by Stonehenge in England, "Large Arch" became one of Moore's most important works.

Our tour continued onboard a small, comfy bus. Tip: A social distancing alternative for visitors with a car is to pick up an art-and-architecture map at the Visitors Center and embark on your own self-paced tour.

As we turned practically every corner, it was becoming clearer to me why architecture enthusiasts make a pilgrimage to Columbus. Even a dialogue between Jin and Casey, the protagonists in "Columbus," contemplates the healing power of buildings.

First Christian Church was Columbus' first modernist building constructed in 1942. Designed by Eliel Saarinen, its plain shape was intended to welcome all denominations and social classes. In 1964, the younger Eero Saarinen designed hexagonal-shaped North Christian Church with his modern take on monumental cathedrals. Its 192-foot-high spire can be spotted from afar, and steps leading to the entrance were inspired by the temples of Angor-Wat in Cambodia and Borobudur in Indonesia. The churches were designated National Historic Landmarks and added to the National Register of Historic Places in 2001 and 2000, respectively.

From one masterpiece to another — City Hall, the Republic Newspaper Building, the library, the Irwin Conference Center (formerly Irwin Union Bank), the Miller House and others, I began recognizing characteristics of mid-century modern design: usually one story, flat rooftops, lots of glass for natural light, rectangular forms, horizontal lines, use of open space and use of both modern materials such as concrete and steel and traditional materials such as stone, brick and wood in their natural forms.

The modern design roots of Columbus came full circle at the Miller House, the former residence of the Miller family. Stepping inside was like entering a modernist shrine.

Designed by Eero Saarinen and completed in 1957, the almost 7,000-square-foot house with its original furnishings is simple yet stately, embodying the clean lines and utilitarian elements of modern design. The Millers often entertained, and their guests included industry leaders and heads of state.

The home's interior design by Alexander Girard created a public space in the center of the home. A conversation pit with "wall-to-wall" seating minimizes the visibility of furniture — a pioneer design concept of the time that is making a comeback today. A sleek 50-foot-long storage unit stretches across a wall with bookshelves and clever cabinets for hiding equipment and displaying prized objects. Across the room a wall of glass windows frames the peaceful forest outside. And discreetly branching from this airy space are the bedrooms, kitchen, and laundry room — a design influenced by the 16th-century Villa Rotunda in Italy.

The Miller House, the standard-bearer of modernist design, was designated a National Historic Landmark in 2000 and donated to the Indianapolis Museum of Art in 2009, one year after Xenia Miller's passing. 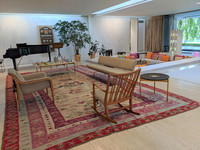 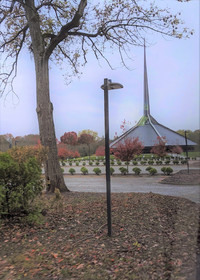 The temples of Angor-Wat and Borobudur inspired Eero Sarrinen's design of the North Christian Church in Columbus, Indiana. Photo courtesy of Athena Lucero. 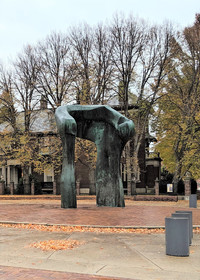 "The Large Arch" on the plaza at the Cleo Rogers Memorial Library in Columbus, Indiana, is a 20-foot-high bronze sculpture by British artist Henry Moore.Photo courtesy of Athena Lucero.