There is only one Idyllwild in the world, according to Google, and during a weekend visit with friends at their home in this bucolic mountain town my husband and I rediscovered the dramatic San Jacinto Mountains, Southern California's second-highest mountain range, at 10,834 feet above sea level. Strawberry Valley, as Idyllwild was first known, was already attracting tourists in the late 1880s. With a name like that, who wouldn't be lured to such a place? By the early 1900s it was advertised as the "Alps of Southern California." Not a ski resort and still quietly famous for its pristine beauty, Idyllwild offers more than you might guess.

About an hour's drive from Palm Springs and two hours from Los Angeles and San Diego, Idyllwild's landscape — lush canopies of ancient ponderosa pines, black oaks and sweet-smelling cedars; a gentle flowing stream; and legendary Tahquitz Peak towering above at 8,846 feet is renowned among artists and mountain-climbers. It is also known as a "sky island" because the forested mountaintop is surrounded by a sea of desert below, creating a unique bioregion, one of the few that exist in the world.

With a population of just over 3,800 inhabitants there are no traffic lights, fast food or chain stores, which lends to its unspoiled appeal, drawing not just nature-lovers but city slickers like me in search of an easy getaway to disconnect from a 24/7 plugged-in world.

But modern tourists were not the first to discover Idyllwild. Millennia before, the Cahuilla Indians escaped unbearably hot summers in the lowland desert and migrated uphill to this alpine paradise, where they also gathered winter provisions, hunting small game and foraging acorns. Bedrock mortars - otherworldly looking flat rocks with symmetrical holes that were used for grinding the acorns — still remain in the area, remnants of the Cahuilla existence.

In the middle of the woods, our guest-room window framed mystical Tahquitz Peak (pronounced TAUK-wich) named after the legendary Cahuilla chieftain. Also known as Lily Rock, the massive granite formation was the birthplace of technical rock-climbing in America that began in the 1930s. By 1950 the Yosemite Decimal System — the international standard that grades the difficulty of climbing routes — was created.

It is here that Yvon Chouinard (of Patagonia clothing fame, environmentalist and equipment manufacturer) along with fellow godfathers of American rock-climbing, Royal Robbins and Tom Frost, pioneered "clean climbing," an ethos respecting the fragility of the wilderness that encourages light use of equipment on the mountain to minimize rock damage and human impact.

Idyllwild is also a resupply town on the famous Pacific Crest Trail, the 2,659-mile-long hiking route through national parks stretching from the U.S.-Mexico border to the U.S.-Canada border. Commonly known as the PCT, it enjoyed the Hollywood spotlight as the setting for "Wild," the 2014 movie based on Cheryl Strayed's book of the same name. Reese Witherspoon snagged a best-actress Oscar nomination for her portrayal of the author's arduous and spiritual 1,000-mile solo journey on the PCT.

The town warmly welcomes the approximately 1,000 hikers a year who come off the PCT after weeks or months eager to shower, do laundry, buy provisions or gear, catch a hearty meal - and share tales with locals about their wilderness treks. While at Devil's Slide Trail, the most popular of Idyllwild's dozen wilderness hikes (it leads to the Palm Springs Aerial Tramway), we met such a PCT-er who had just hiked 800 miles.

"How far is Idyllwild from here?" the lean, friendly, 20-something man from Maryland asked. It's a long walk we responded, then invited him to load his backpack into the Jeep and together we drove into town.

Technically speaking, Idyllwild is the largest in a trio of unincorporated communities in Riverside County that includes Pine Cove and Fern Valley. You won't find a city council or chamber of commerce here, but there is an unofficial (albeit four-legged) official — Mayor Max, a regal Golden Retriever, the town's ambassador and most popular figure. Friendly and accessible, he sports a tie, welcomes photo ops and can be spotted riding around town in the back of a shiny white pickup.

With a mayor like Max, there's a lot to love about this unstuffy and creative town that has evolved into a thriving arts and culture community and ranks among the 100 Best Small Art Towns in America.

Our weekend was also a "pilgrimage" to Idyllwild's annual Art Walk and Wine Tasting. Organized by the Art Alliance of Idyllwild, this September will be the event's 19th anniversary as the village transforms into an open-air art gallery exhibiting extraordinary works by local artists - paintings, sculptures, jewelry, ceramics, photography and more.

"My son and I look forward to this event every year!" a Palm Springs resident enthusiastically shared as we crossed the street to queue up for our first wine sampling.

With wine glasses in hand, we visited cafes, the Idyllwild Historical Society, shops and art galleries, visually feasting on original art pieces and meeting their creators while sampling a showcase of impressive vintages produced by wineries in the nearby wine countries of Temecula and San Diego.

While perusing art exhibits on the grounds of the historical society, I gave up my place in the wine-tasting line and wandered through the back door of a small 1930s wood cabin a few feet away. Once the summer home of a family for three generations, it was purchased by the organization in 2001 and given new life as a permanent museum (admission is free).

Oblivious to the crowd outside; wall-to-wall artifacts; historical documents; photographs; and logging, mining and mountain-climbing histories took me back to a thriving Strawberry Valley. Who knew this high country was the center of production of gorgeous Arts and Crafts-era log furniture also on display?

And behind the rustic museum a 21st-century climate-controlled archive and research center was built in 2009 to house 7,500 more historical items, an achievement that garnered awards from the Society of California Archivists and the California Council for the Promotion of History, becoming the first local independent historical society in the state to receive such honors.

Art is a year-round way of life here, from concerts, stage productions and regular art fairs in the park to the internationally renowned Idyllwild Arts Academy, where young artists hone their talents at the residential college preparatory high school. And for artists of all ages and skill levels, the Idyllwild Summer Arts Program awakens the creative juices with high-quality instruction.

Art in all its forms can be enjoyed at just about every turn around town, from galleries to unexpected hot spots like Higher Grounds Gallery at Idyllwild Coffee Roasters, Sky Island Natural Foods Market, the array of wonderfully eclectic dining spots — and now the exciting Middle Ridge Winery and Gallery, an extraordinary pairing of tasting room and art gallery.

"Idyllwild Deer Sightings," unveiled in 2015, is a permanent public exhibition of the Art Alliance of Idyllwild — 22 life-size aluminum deer depicting all things Idyllwild painted by local artists and placed at various locations around town. Outside La Casita Mexican Restaurant I spotted "Rocky," a white deer painted with a fantastic scene of rock-climbers, and met Rocky's creator, Neil Jenkins.

Jenkins spoke passionately about how much he and his wife Donna (both are artists and mountaineers) love living in Idyllwild. "Rocky," said Jenkins, "expresses the essence and beauty of this incredible place."

For information on lodging and other activities in Idyllwild, visit www.idyllwild.com. 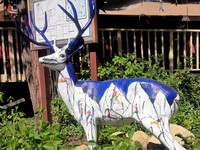 . "Rocky," painted by local artist and mountaineer Neil Jenkins, is among 22 painted deer in the Idyllwild Deer Sightings, a public art installation of the Art Alliance of Idyllwild. Photo courtesy of Athena Lucero.