I confess that I had a great time in Branson. And I'm not even 60.

Before leaving my Los Angeles home for my first visit to southwestern Missouri I worried that I might regret booking the trip.

Then I heard that Branson is surrounded by lakes and Ozark Mountain wilderness and that in 1991 CBS's "60 Minutes" declared it the "Live Music Show Capital of the World."

That hit a note. The kids in my family learned music appreciation early when our clever mother got us to rise and shine by blasting "Greensleeves," Mozart and "Streets of Laredo" on the record player. So I went to Branson with an open mind.

It turns out people don't come to Branson to play shuffleboard. In fact, getting into the rhythm of this entertainment-lover's paradise was contagious.

On the first day I caught three shows, starting with James Garrett's heartwarming tribute concert to John Denver before lunch. By late afternoon I was onboard the three-story Showboat Branson Belle watching kayakers glide through the tranquil waters of Table Rock Lake; then I toe-tapped to Frankie Valli's "Big Girls Don't Cry" and more nostalgic tunes during a fabulous dinner show inside the floating 700-seat theater highlighting Janice Martin, the world's only aerial violinist, who stunned the audience with her musical and acrobatic performances. By 8 p.m. I was sitting under the stars watching the dramatic production of Harold Bell Wright's famous 1907 novel "The Shepherd of the Hills" in the amphitheater built on the author's homestead. (John Wayne starred in the story's 1941 movie version.)

"We love coming here," a young couple from Massachusetts told me after one of the concerts. "There are more shows here than Broadway!"

From "Take It to the Limit," a tribute concert to the Eagles (one of the world's most successful musical bands), to the flawless Texas Tenors' sold-out performance at the landmark Starlite Theatre to the Grammy-nominated Liverpool Legends (the only Beatles tribute band with members handpicked by George Harrison's sister), there's every reason why music-lovers come to Branson to lose themselves in live-show marathons.

Indeed, the "older" demographic is a major group visiting Branson — for good reason. They were the lucky ones to swing, twist and rock 'n' roll before the rest of us to the best music icons the world has ever seen.

The other side of the demographic coin is young families. Counting those two groups and everyone in between, more than 4 million visitors a year make their way to Branson to hear top artists perform pop tunes and cherished songs of yesteryear and to see stage productions and knee-slapping comedy that even children enjoy.

Branson is Las Vegas off steroids. Yes, there are bright lights and neon signs, opulent theaters, glaring marquees, shopping, restaurants and "The Strip" (76 Country Blvd.) with its requisite bumper-to-bumper traffic. But it's casual, unpretentious and friendly. There are no casinos, and you'll be hard-pressed to encounter excessive drinking or crime. Best of all, the average adult show ticket price is $35. What's not to love?

Getting around Branson is easy because most hotels, theaters and attractions are along The Strip, such as the landmark Baldknobbers Inn where I stayed and the unexpected Titanic Museum, an astounding permanent exhibit created by John Joslyn, explorer and television producer who co-led the historic 1987 Titanic Expedition. In a partial replica of the RMS Titanic guests young and old are taken back to April 10, 1912, when the ship departed Southampton, England.

Through remarkable film footage, photos of passengers taken by Father Francis Browne and more than 400 artifacts retrieved during the expedition, Joslyn's museum honors the 2,208 men, women, children and crew who set sail on the famous voyage.

A museum in its own right, 50-year-old Dick's Five and Dime has become a popular destination. Step inside the old-fashioned American variety store and go back in time. The store's 50,000 items include nostalgic toys, candies, gifts, hardware, household items, a Baseball Wall of Fame and sports memorabilia.

The totally modern Branson Landing, just a short walk from the five and dime, will beam you back to the future. The boardwalk is a lakeside entertainment venue with high-quality shops, casual and fine dining, hotels and condominiums. Take time to enjoy the Landing's centerpiece — the water, fire and light show created by the designers of the Bellagio fountains in Las Vegas.

Entertainment beyond The Strip also lures visitors to Outlaw Run, the new record-breaking wooden roller coaster that opened in 2013 at the Silver Dollar City amusement park.

Wood coaster aficionados couldn't get there fast enough to head down the first drop — the steepest in the world at 169 feet — then whirl through three inversions that twist riders upside-down and back up again, another first for a wood coaster. I opted out but got my adrenaline rush watching screaming thrill-seekers take the dive then high-five each other for their new bragging rights.

Silver Dollar City did not start like the average theme park. It opened in 1960 with one attraction, Marvel Cave, 500 feet underground. The park was named for the silver dollar change given when the earliest visitors came to see the fantastic caves with passageways leading to waterfalls and lakes. First known to the Osage Indians during the early 17th century, the caves (a National Natural Landmark) are still a popular attraction, with one of the largest cave entry rooms in North America.

The Ozark-themed park — one of the prettiest I have seen — was designed without cutting down trees. Meandering forested walkways lead to shops, restaurants, artisan booths and rides. It is also home to the National Harvest Festival, the heartland's "granddaddy of craft festivals" that lasts for weeks. This year's event runs Sept. 12 through Oct. 25.

Enjoying the local dishes wherever I go is a must, so I made sure to get my fill of tasty (albeit hefty) Ozark standards — grits, fried chicken, succotash (vegetables cooked in an iron skillet), biscuits and gravy, and a deliriously delightful apple dumpling.

Gourmet fare wowed my taste buds when I sipped my first spoonful of smoked tomato soup at a lunch prepared by award-winning Executive Chef Robert Stricklin at College of the Ozarks, where students work in exchange for their education. Stricklin teaches culinary arts and oversees Dobyn's Dining Room.

Branson is doing something right, and its recipe for success through the decades has been impressive. But not resting on its laurels, the city is plowing forward with a multimillion-dollar facelift that will revitalize its 100-year-old downtown.

The live music show capital of the world is about to arrive — again.

For special lodging and show packages, contact Branson Tourism at www.bransontourism.com or 800-926-5341 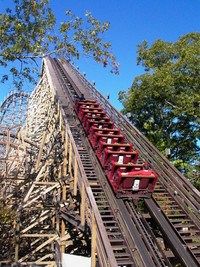 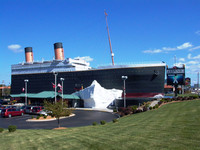 The partial replica of RMS Titanic, home of the permanent Titanic Museum in Branson, Missouri, honors the 2,208 passengers and crew members of the 1912 voyage through stunning photos, film footage and memorabilia retrieved from the 1987 Titanic expedition. Photo courtesy of Athena Lucero.