Vacation Places That Are Hard to Forget

When I'm not traveling I am either planning the next trip or reminiscing about favorite places. Two categories of adventures linger in my mind: a place where I've encountered a person with whom I've made a visceral connection or somewhere that has stimulated an emotional response.

As I look back to the last year of travel, one visit lingers in my psyche: the spot where Vice Adm. Horatio Nelson died on the HMS Victory on Oct. 21, 1805, at the height of the Battle of Trafalgar. A single lantern illuminating the place on the gloomy orlop deck where he perished wakened in me a sadness for lives lost at war.

Now, during the whole world's forced travel furlough, I asked friends confined by the pandemic to think of where they remember feeling a surge of emotion, and why.

"I was standing at the World Trade Center site before there was any reconstruction," John said. "It was the only time when I could feel the doom and despair in my chest." Pam, who visited the finished 9/11 Memorial, said she was inspired by the Survivor Tree, a burned-and-broken pear tree that was removed from Ground Zero and nurtured by the city's horticulturists.

"I get chills at Valley Forge," Carrie responded, "because my ancestor, Gen. Enoch Poor, was there for that long, terrible winter."

A few others mentioned being moved by the Gettysburg Battlefield and imagining Lincoln giving his address. Kelly and Pat felt a surge of patriotism at Independence Hall because the signing of the Declaration of Independence "literally changed the world."

"I have vivid memories of being overcome with emotion on the Trail of Tears National Historic Trail," Susan wrote. "I sat on the ground and wept."

"I was profoundly impacted when I stood where the bomb was dropped at the Hiroshima Peace Memorial in Japan," Summer wrote. "I felt a disconnect between the rawness of the destruction and the beauty of the garden around it."

"My father, who was the field director in Munich, was there on the day it was liberated, and I realized the horrors he had witnessed."

"I loved holding Elvis' microphone in the Sun Studio in Memphis," Mimi said as a reminder that not all exceptional encounters are sad. But her most unforgettable visit was to the Shoes on the Danube Bank memorial in Budapest, Hungary, which consists of iron shoes as witness to the tragic fate of Jews who were forced to remove their shoes before being tied together, shot and tossed into the river.

Barbara, Janet, Sharon and Marilyn each mentioned their sorrow standing above the USS Arizona at the Pearl Harbor National Memorial in Honolulu, which marks the resting place of 1,102 sailors killed during the attack in December 1941.

Sarah and David felt they were walking in the footsteps of his grandparents on Ellis Island. My first visit there was poignant because my grandparents had been processed there in the early 1900s and I had written about it in my first novel, "The Midwife." The idea of someone failing the medical check and being marked with an "X" on her back before being returned on the next boat horrified me and reminded me that their hardships were the legacy of my comforts and freedom.

Robin can't stop thinking about her visit to the Chernobyl.

"The horror of visiting the nuclear reactor was nothing compared to the ghost town of Pripyat, where the pets became feral after residents, who were told they would be only be gone for a few days, never returned. Kathleen recalls the pounding of her heart in the middle of Tiananmen Square in Beijing as she thought of what had transpired there.

Kathleen and Sandy recalled their despair at the Anne Frank house in Amsterdam, and Monty sent a photo of the bookcase that hid the entrance to the attic hiding place

"This is where I started to cry," he said.

I am haunted by the Children's Memorial at Yad Vashem in Israel, which is a memorial to the more than 1.5 million Jewish children who perished during the Holocaust. The candles that reflect infinitely in that somber space flicker like stars in the firmament. Most affecting, though, is the recitation of the murdered children's names in an endless, tragic loop.

Phil G.'s favorite spot is home plate at Dodger Stadium. He also recalls his heartbreak standing where Mahatma Gandhi was killed in Delhi as well as sensing the presence of Rev. Martin Luther King Jr. at the Ebenezer Baptist Church in Atlanta. "Then there is the White Horse Tavern in Manhattan," he wrote. "You could almost smell where Dylan Thomas downed his last 18 shots of whiskey before collapsing in the street."

Wordsworth was inspired by Dove Cottage in the English Lake District. Paul said, "It helped me understand how landscape can nourish the great soul of a poet." Likewise, I believe that Monet's garden at Giverny is the quintessential site to appreciate how art transforms nature.

Standing on "the very spot" is one of the most powerful ways to learn profound life lessons. These places can alter our assumptions and may revise future choices as we journey through this always-astonishing world. 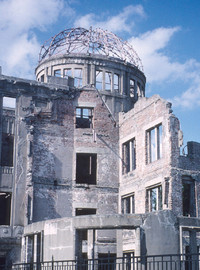 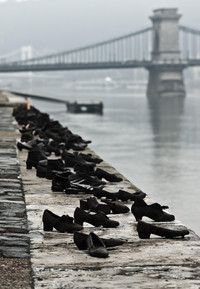 Shoes on the Danube Bank in Budapest. Hungary, recall the slaughter of Jews by fascists during World War II. Photo courtesy of Philip Courter.