Even though I am a resident of California I had never driven up historic U.S. Highway 395, which slices through Inyo and Tulare counties. The road is the main link between Southern California and the ski slopes of Lake Tahoe, affording glorious views of towering Mount Whitney, at 14,500 feet the tallest peak in the Sierra Nevada. It was time to see all of this for ourselves.

Most exciting as my husband and I headed north was visiting significant landmarks, from the "living" ghost town of Randsburg to a gateway to Death Valley to the China Lake Naval Weapons Center at Ridgecrest. We came upon the Lone Pine Film Museum in far-from-deserted Lone Pine. And past the granite outcroppings of the Alabama Hills we reached the most moving site of all, Manzanar National Historic Site.

It would be easy to miss Randsburg, so unobtrusive is the sign that points to one mile off the highway. This town reached its heyday in 1895 with the discovery of gold and the creation of the Rand Mining District. Now it often serves as a backdrop for Western movies.

So does the lovingly restored Randsburg General Store, in operation since 1896. Brad Meyers and his wife, Carol, own the store as well as the whole town. Take a seat at the marble-topped counter beneath shelves lined with vintage soda bottles, old metal tins and mining magazines, and order a Muddy River (chocolate soda phosphate) served in a quart jar or an old-fashioned sarsaparilla root beer float.

"Forty-eight people live here," the jovial, white-haired host told us. "Three of them we have never seen!" He mentioned a previous owner, a 97-year old named Olga who once admonished Brad Pitt not to swear in her presence. A tipsy Pitt disobeyed "and she dragged him out of the store by the ears!" Meyers related with glee.

When you've had your fill, amble along the main street to the Hole in the Wall Mercantile filled with antiques and mining supplies or the White House Saloon.

In Lone Pine we came to a halt at the Museum of Western Film History, which bills itself as America's leading repository of that genre's past. Displays feature the movie careers of such old-timers as Tom Mix, Gene Autry, Roy Rogers, Humphrey Bogart and more recently Kevin Bacon. This location also serves as a backdrop for many Westerns.

Our final destination was Manzanar National Historic Site. An original wooden watchtower and a fence edged in rabbit brush delineate the area. The site memorializes a shameful episode of 20th century American history. After the attack on Pearl Harbor in December 1941, the U.S. government rounded up the Japanese population on the West Coast and sent more than 100,000 of these American citizens of Japanese ancestry to 10 remote internment camps across the West and beyond.

With more than 11,000 internees, Manzanar ranks as one of the largest. Winter brought frost and snow, summer temperatures in excess of 110 degrees F. Yet these law-abiding "prisoners" managed to re-create a semblance of normal life, erecting a school, places of worship, a refectory hall and the Japanese gardens so emblematic of their culture.

We explored the square mile that is Manzanar on foot to view reconstructed barracks where families shared a few square feet of living space, explore traces of an Episcopal church and a Buddhist temple, and walk around a baseball diamond. Rows of aspen trees in shades of gold and rust provided shade. At the far end of the camp the memorial inscribed with Japanese lettering stands out like a beacon against the snow-capped Sierras.

We elected to spend the night at the nearby historic Winnedumah Hotel in Independence. Built in 1927 and now in some disrepair, the ghost-ridden hallways and creaking floors once echoed with the footsteps of John Wayne and Bing Crosby. The small hotel sits directly across from the old courthouse, another movie backdrop, where Charles Manson was arraigned. New owners are funding the Winnedumah's much-needed upgrades and restoration. Behind the hotel, the Eastern California Museum preserves the county's multicultural heritage.

Only one restaurant graces Independence's main street, and it is a winner. Patrons come from miles around to linger over tender cubes of boeuf bourguignon and authentic Lyon-style onion soup at the French-owned Still Life Cafe. Hours of operation vary, so be sure to call ahead. We found different fare in Bishop, a jumping-off point for the slopes of Mammoth and the eastern entrance to Yosemite National Park. The beloved Erick Schat's Bakkery draws busloads of visitors daily. We preferred the quieter Holy Smoke Texas BBQ across the street for pulled pork tacos and corn bread. Thus pleasantly full we toured the Shoshone Museum, a treasure-trove of local Native American history and the Amargosa and Death Valley regions. 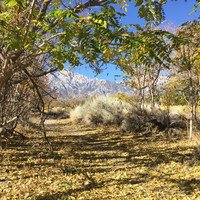 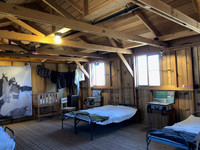 A barracks at the Manzanar War Relocation Center in Inyo County, California, shows the conditions in which Japanese detainees had to live. Photo courtesy of Kitty Morse. 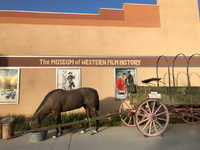 The Museum of Western Film History in Lone Pine, California, offers the most complete collection of memorabilia from this genre in the country. Photo courtesy of Kitty Morse.