Sailors, Scuba Divers and Hamilton Buffs: St. Croix Is for You

Some 30 feet below the calm waters of the Caribbean off St. Croix — the largest of the U.S. Virgin Islands — an 8-foot-long reef shark cruised beside me, less than 3 feet away. Nearby, an even bigger shark swam within a few feet of another diver in my group. These sharks weren't there to nibble on us. Rather, they were tagging along to gobble up striped lionfish — an invasive species wreaking havoc in the region — that we were spearing.

"Reef sharks are kind of like big puppies tagging along for a meal, though you shouldn't try to pet them," veteran diver Michelle Pugh told me. She's a Southern California native who has run Christiansted-based Dive Experience on the northeast side of St. Croix for nearly four decades. "And we certainly don't hand-feed the sharks." Though the lionfish have long and toxic spines, my reef shark companion didn't seem to care. It swooped in and seemingly inhaled one after a guide from Dive Experience shot it and then released it from the tip of his spear.

But there was much more to see in the watery deep than strikingly beautiful lionfish, voracious eaters that have no known predators in the Caribbean. Over several days of diving we encountered hawksbill and green sea turtles and numerous kinds of coral, as well as sea anemones, eels, crabs, lobsters, nudibranchs, octopi, stingrays, sponges and a wide array of fish, including barracudas, blennies, groupers and parrotfish.

After a two-tank dive one afternoon, I repaired to Shupe's dockside restaurant just yards from Dive Experience with a couple of new dive-boat friends for a crispy chicken sandwich with a dash of Sriracha sauce and a locally brewed Leatherback lager.

Later, before returning to my digs at the Buccaneer Hotel, I walked around downtown in the historic quarter of Christiansted, a former Danish center of Caribbean commerce. It boasts handsome buildings that looked like they hadn't changed much since Alexander Hamilton — yes, that Alexander Hamilton — lived here in the 18th century. The community also has more than a few feral chickens, which I dodged.

Sadly, the homes where Hamilton, brother James and their mother lived before she succumbed to yellow fever in 1868 no longer stand. The erudite Hamilton left the island at age 16 after working as a clerk to a wealthy merchant, moving to Boston in 1772 and embarking on a historic career during and after the American Revolution.

It was the yellow-hued and bulky Fort Christiansvaern, which looks out over the blue waters of Gallows Bay, that drew me next. It was here that Hamilton's mother was jailed for several months in 1750 after she left her bitter husband, Johan Michael Lavien, who a decade later accused her of desertion and adultery. Her cell was in the west wing and had only a small window with a view of the bay.

But it was far better than the conditions for runaway slaves, who were kept and sometimes left to die in what can best be described as a basement dungeon when they were captured, said Frandelle Gerard, who guides a three-hour Hamilton Walking Tour in Christiansted. The ramparts of the fort faced out toward the water, as well as inward in defense of a potential rebellion by slaves, who made up the majority of the island's population and worked in often grueling conditions in sugarcane fields. The town also had a number of free blacks, she said.

The Buccaneer Hotel is a historic resort that opened in 1947 as an 11-room inn on the grounds of a former cotton, indigo and sugar plantation founded in 1653 by Charles Martel, a Knight of Malta. Some of the resort's buildings are made of stone, as is the round sugar-mill structure that dates to 1733 and is only meters from the entrance. Billed as the Caribbean's oldest family run resort, it offers sweeping views from its hilltop restaurant of Gallows Bay and Christiansted, which is just a five-minute drive away.

Christiansted also offers sailing and snorkeling tours to Buck Island National Park, horseback riding, kayaking, golf and island tours to historic sites. Several of my dive partners invited me to go sailing with them one evening on the Roseway, a 112-foot-long wooden gaff-rigged schooner built in Essex, Massachusetts, in 1925. Now operated by the nonprofit World Ocean School based in Camden, Maine, it sails off New England in the summers and is based in St. Croix during the winter season.

On board, guests helped raised the ship's sails under the direction of teens and 20-somethings who live, sail and study aboard the Roseway, which was designated a National Historic Landmark in 1997. It is the only known surviving example of a fishing schooner built specifically with racing competition as an objective.

As the sun dipped in the west, the ship slid over the bay and my diving friends — whose daughter was part of the Roseway crew — and I toasted St. Croix with rum punches. It was a fitting end to too short a trip. But no worries. I'm sure I'll be back. 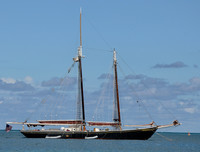 The Roseway, a National Historic Landmark that houses the World Ocean School, lies at anchor off St. Croix in the U.S. Virgin Islands. Photo courtesy of Brian Clark.

Michelle Pugh scuba-dives near a green turtle off St. Croix in the U.S. Virgin Islands. Photo courtesy of Brian Clark.

Visitors to St. Croix in the U.S. Virgin Islands can learn the island's history at Fort Christiansvaern. Photo courtesy of Brian Clark.

The Roseway, a National Historic Landmark that houses the World Ocean School, lies at anchor off St. Croix in the U.S. Virgin Islands. Photo courtesy of Brian Clark.