Racist Past Gives Way to Music in Shelby, North Carolina

My wife and I only ended up in Shelby, North Carolina, because we needed a bathroom break. We were driving the local roads west from Charlotte toward the Blue Ridge Mountains, and as we dropped into historic downtown Shelby we decided to stretch our legs and use the facilities at the local coffee shop.

At first, I wouldn't have given 2 cents for two minutes in Shelby. After I parked my car I looked up to see a historical marker that turned out to be a dedication to Plato Durham, a Confederate veteran who became a state politician during the Reconstruction period. He was an avowed racist and a proud member of the Ku Klux Klan. As I was to learn, Shelby had an uneasy relationship with the KKK.

For a time the most famous person to come from Shelby was Thomas Dixon, who wrote a trilogy about the Klan that romanticized and espoused white supremacy. The most famous book of the three was "The Clansman," the basis for D.W. Griffith's racist movie epic "Birth of a Nation." Dixon once planned to erect a statue of his uncle in Shelby's courthouse square. The project was initially met with enthusiasm until Dixon said his uncle would be adorned in his Klan robes.

The second signpost I noticed represented an old 45 record. On closer look I saw that it was a representation of a Don Gibson song, and that's when I decided to stay and have a look around. Down the street was an old movie marquee with the words "Don Gibson Theater" on it. I was in my element.

As it turned out, two country-western-bluegrass giants from the mid-20th century, Don Gibson and Earl Scruggs, were Shelby natives, and the city has made an invigorated effort to celebrate these deserving and famous musicians.

The multitalented Gibson was not only a topnotch country-western singer, lighting up the charts with songs such as "Oh Lonesome Me," but he was also a brilliant songwriter: "Sweet Dreams" for Patsy Cline and "I Can't Stop Loving You" for Ray Charles. Shelby's Don Gibson Theater is a beautiful auditorium re-created from an old movie house. It's also a bit of a Don Gibson museum with lots of memorabilia from his life, including a couple of his guitars.

My wife and I wandered in, and a lovely woman with the musical name of Cherish (No. 1 song in 1966 by the Association) showed us around. A tradition in smaller mid-America venues is that guests sign their names on the backstage wall. Since the venue specialized in country-western and roots music, plenty of famous names from this genre were here, so it was a surprise to see Whitney Houston's signature, as well. It turns out that Whitney's aunt had a store across from the courthouse square in Shelby, and Whitney would come down to visit and perform.

Old Southern towns were always built around the courthouse square. Shelby was no different, but in the modern world the courthouse gets rebuilt somewhere else and the old building sits vacant. That's not the case in Shelby, which created the "Earl Scruggs Center: Music and Stories from the American South" in the old building. Scruggs pioneered three-fingered banjo pickin', which attracted bandleader Bill Monroe, and together the two virtually created what we call bluegrass music today. Scruggs later teamed up with Lester Flatt to form a very successful duo. Their most popular song is the instrumental "Foggy Mountain Breakdown," which was used in the movie "Bonnie and Clyde" and made the duo world famous.

The center is a museum dedicated to Scruggs, bluegrass music and even the town of Shelby. The statue of Scruggs, which looks like it was carved from butter, is a kind of kitschy monument in its own right.

However, if we are going to talk about monuments, then we have to refer back to Don Gibson. He was buried in Sunset Cemetery, about a five-minute drive from downtown Shelby. If you head to the back lowlands of the cemetery and look for the biggest, blackest, baddest monument in the whole place, that is where Gibson is buried. Visitors like to come, strum and sing and perhaps chortle a line or two from Gibson's big hit from 1961, "Sea of Heartbreak": Lost love and loneliness / Memories of your caress / So divine, I wish you were mine / Again, my dear.

Shelby sits 46 miles west of Charlotte, with most of the trip along Interstate 85. The city is about 15 minutes from Kings Mountain National Park, site of an important Revolutionary War battle. Shelby boasts a number of familiar hotel brands. 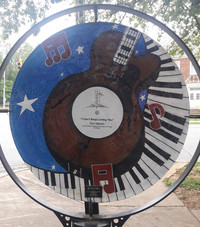 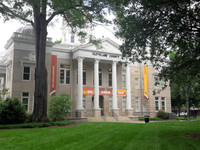 The original courthouse in Selby, North Carolina, has been turned into the Earl Scruggs Center. Photo courtesy of Steve Bergsman. 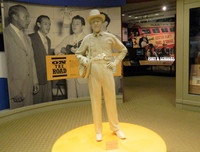 A statue of Earl Scruggs at the Earl Scruggs Center in Selby, North Carolina, looks as if it were sculpted from butter. Photo courtesy of Steve Bergsman.

The original courthouse in Selby, North Carolina, has been turned into the Earl Scruggs Center. Photo courtesy of Steve Bergsman.