"Tierra! Tierra! (Land! Land!)" called out a tipsy passenger as the jetty we had left a couple of hours earlier came back into view. We were on the return leg of our excursion to Mirador de la Badia, the famed oyster beds of L'Ampolla. His companions joined in the cheer, leaning this way and that to the thump of the waves. Was it because we had all imbibed a little too much champagne during the oyster-tasting?

I stifled a grin and sought the coolness of the sea spray raining down all around. I had come about 30 minutes south of Tarragona to l'Ampolla, a diminutive resort tucked away on Spain's Costa Dorada, at the behest of my friend Nacira. So unassuming is the town of just more than 3,000 souls that it is not even mentioned in the Michelin guide to Spain. Getting there meant taking a two-hour train ride south of Barcelona.

On this windless morning the salt air felt as invigorating as a dip in the sea. Ahead in the distance Far del Fangar lighthouse stood guard at the entrance to the mirrorlike Gulf of Sant Jordi, whose shape reminded ancient explorers of a bottle. l'Ampolla, it turned out, is Catalan for "cruet."

Our boat set out under magnanimous skies that afforded a panoramic view of shuttered vacation homes, mostly French-owned, perched above the creeks scalloping the coastline. We were headed for the far reaches of the "cruet" to the oyster and mussel farm of Mirador de la Badia, where the mingling of waters from the Rio Ebre (Ebro in Spanish) and the warm Mediterranean create the mellow environment for raising l'Ampolla's claim to fame. The shellfish's mild flavor, we were to learn, is due to the unique waters that combine saltwater with the nutrient-rich fresh waters of the river.

Nacira and I faced the soft breeze, taking in the sun and spray of the turquoise waters until we disembarked at the Mirador's shaded platform. Acres of crustaceans in various stages of development dangled from submerged cages. These oysters attract connoisseurs from around Europe, and we were soon to find out why. Indeed, such is the wide-ranging reputation of delta oysters that they are celebrated during annual festivals such as the Gastronomic Days of l'Ampolla, held every September.

Our captain led the way into a classroom decorated with paraphernalia used by local fishermen.

"The Delta del Ebre is Catalonia's largest wetland," he intoned as soon as we sat down. "In addition to oyster farms, the delta is renowned for its sport fishing, diving, kite-surfing and bird-watching. Dozens of migratory birds, including flocks of pink flamingoes, gather at the mouth of the Ebre."

We followed him to the edge of the deck, where one of his colleagues pulled cage after cage of oysters and mussels out of the water to illustrate the various stages of development of the prized shellfish, from tiny "spat" to full grown delicacy. It takes close to three years for an oyster to reach market size, growing at the rate of an inch per year.

After his informative talk a server set before us a tray of shucked oysters lustrous as wet pebbles. Then she returned with a full liter of cava, Spanish champagne. We swallowed oysters bathing in nature's brine and gulped down the cava. No sooner were we done with the silken-fleshed crustaceans than mussels took their place. I wasn't the only one to swoon.

We learned from our captain that the delta has become synonymous with ecotourism. In 2013, UNESCO declared the area a biosphere reserve and the Parc Natural del Delta del Ebre a model of biodiversity conservation. In addition to the quality of its shellfish, the Ebre's estuary provides miles of deserted beaches, biking and hiking trails that meander alongside a mosaic of rice paddies.

A later drive through the area brought to light the importance of this regional industry. A cannon sounded off at intervals to scare away the birds. Flags of black plastic "scarecrows" fluttered above the flooded landscape. Here and there, traditional thatched farmhouses called "barracas" ("barra" is Catalan for "mud") perched along the edge of rice paddies.

The delta is only one of three Spanish regions awarded a Designation of Origin (like the French Appellation d'Origine Contrilce) for its fonsa, montsianell, senia and tebre rice varieties. Japan took notice, and the delta's rice gave rise to a new industry: Mediterranean sake. Organic Koji and miso followed.

Paddies and coastal lagoons edge both sides of the narrow Peninsula de la Banya, a regular stopover for thousands of migratory birds. We were in luck. From the shade of a small belvedere observation deck we watched a flock of pink flamingos picking at the plankton undisturbed.

On the night I arrived, Nacira and I had made the rounds of l'Ampolla tapas bars. Now, when we returned to shore full of oysters and cava I asked her, "What's next?"

"How about grilled sardines?" came the instant reply. "There's a great little place nearby that serves sardines from the bay."

Who was I to turn down her suggestion? I summoned my strength and readjusted my sun hat, ready to pursue further gastronomic research 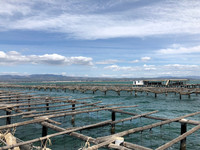 An oyster farm in Delta del Ebre, Catalonia, Spain, provides an education in how these creatures are produced. Photo courtesy of Kitty Morse. 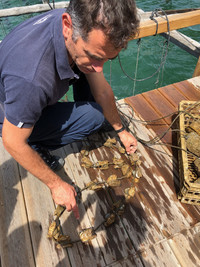 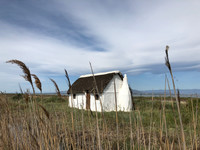 Kitty Morse is a food and travel writer, presenter and the author of 10 cookbooks, five of them on the cuisine of her native Morocco. To read features by other Creators Syndicate writers and cartoonists, visit the Creators Syndicate website at www.creators.com.

An oyster farm in Delta del Ebre, Catalonia, Spain, provides an education in how these creatures are produced. Photo courtesy of Kitty Morse.