Think of vacationing in New Jersey and the Jersey Shore immediately comes to mind — 141 miles of long-grassed dunes and beaches and the hustle and bustle of the shore's boardwalks: arcades, fair rides, ice snow cones and people parading in skimpy beachwear.

But I'm not here in Jersey to hang at the beach or the boardwalk. I've taken a 12-mile side trip across the Hudson River from a stay in New York to Montclair — the hometown of two heavy-hitting icons and legends in their own right who inhabited vastly different worlds.

We're talking baseball and beauty and two people who each made a huge mark to put the suburban town of Montclair on the map: New York Yankees' Baseball Hall of Famer Yogi Berra and cosmetics maven Bobbi Brown. I've come to feed the baseball fan in me at the Yogi Berra Museum and Learning Center and experience The George, the landmark modern-meets-historic bespoke boutique hotel that Brown opened last year with her husband, real estate mogul Steven Plofker.

From the outside The George is an understated building that does not blare out "hotel." It's located on a suburban hillside street that's clearly home to families who, from the size of the houses and plots and vehicles in the driveways, have helped make Montclair the wealthiest town in New Jersey. In fact, I ask my ride if I'm in the right place before seeing the hotel's subtle sign.

The George was built in 1902 as a private home at the turn of the 20th century, for Charles Van Vleck (the Van Vlecks being a historically famous lineage in these parts). By the time Brown and her husband transformed the 32-room mansion, it had become a "once-forgotten" Georgian Inn.

The minute I walk into the lobby, I feel transported to my native England and a modern, airy and welcoming version of the "Downton Abbey" feel of British stately homes. There are paneled walls, chandeliers, gilt mirrors, and fine paintings of fox hunts and proud hounds hanging over extravagantly carved fireplace mantels.

But the glass beads of a striking tabletop chandelier lamp hang inside a modern-day orb structure, there's a galvanized metal chest in my room, and the leather-buttoned couches are of chic-versus-antiquated designs. Bold tartan fabric chairs and British Union Jack throw cushions add a color vibe reminiscent of a Rolling Stones album cover. There's a framed print of the Rolling Stones' iconic Union Jack tongue-and-lips logo somewhere in the hotel, I'm sure of it.

It's intentional. Brown tells me she's a complete Anglophile who has been in a longtime love affair with London and all things British. The George, with its overall look described by Brown and Plofker as "designed-modern," is certainly an Anglophile's dream stay.

The hotel's aesthetic is also a reflection of Bobbi's own classic-but-comfortable personal style from which, she tells me, she rarely waivers: loose white shirts and slouchy black sweaters over modern-cut jeans or black pants, pearls and a color dash of lipstick. "My style's about being comfortable and wanting to hang out," she tells me, and that's her intention at The George.

She's surely hit it out of the ballpark. I just want to stay in, cozying up in the library over art books and hitting the secret candy stash behind a hidden door in the paneling (nice touch, Bobbi!). But I'm headed out to a real ballpark at the Montclair State University campus, home to the MSU Athletics and the museum honoring Yogi Berra, Brown's childhood neighbor and family friend.

It's a friendly, small and modern museum. The permanent collection captures Berra's life and stats in displays of large posters, baseball cards, his uniforms, and other paraphernalia of the game. One wall is filled with 76 modern-art portraits of "New York City's Golden Boys" from 1946-60, and at the life-size "Pitch!" screen I whack a few balls waaay out of the strike zone.

I try on the samples of Berra's old-fashioned and bulbous leather catcher's mitts on the Mitt Mobile cart and watch a short movie about his life. Then I head back to The George, check out and linger for a few hours longer in the library before my evening flight.

As Yogi Berra would say: "It ain't over till it's over." 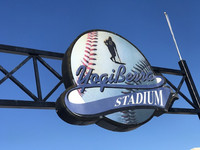 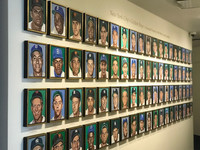 A wall containing 76 modern-art portraits of "New York City's Golden Boys" from 1946-60 is on display at the Yogi Berra Museum and Learning Center in Montclair, New Jersey. Photo courtesy of Nicola Bridges. 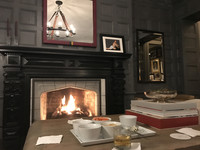 The George Hotel offers a quiet getaway during a busy trip to Montclair, New Jersey. Photo courtesy of Nicola Bridges.